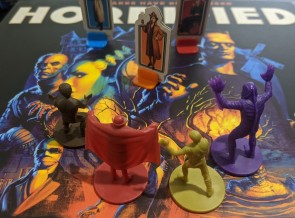 I wrote a review calling Pandemic the best gateway game ever. I may have spoken too soon. There's a new kid on the block. You might know them. Average build, colourful board, kind of scary looking, goes by the name Horrified.

How do they compare? And who's going to come out on top of this battle of old vs new?

From the moment you open the box, the amount of love and care poured into Horrified is obvious. Instead of finding cardboard tokens to pop, and cards to unpackage, you're greeted with a warning.

You are about to unfold one of the STRANGEST tales EVER TOLD.

This sets the tone of Horrified, a game that captures the fun of those old black and white horror movies. Before horror and suspense were figured out, and the monsters were endearing because they were clearly men in suits who couldn't move without assistance. 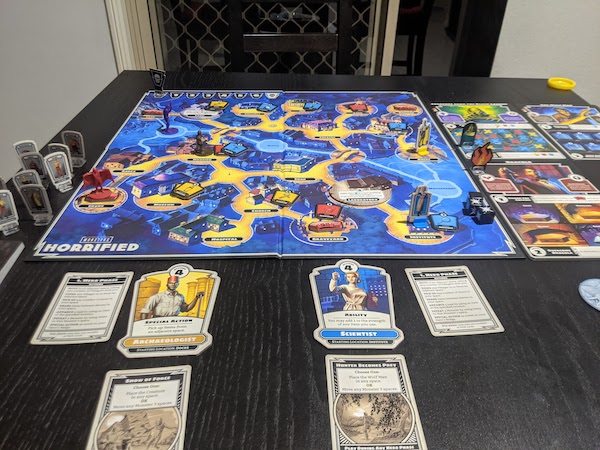 As such, you'll be facing off against the Wolfman, or one of his counterparts like The Mummy, The Invisible Man, Dracula, and several others. Whose goal is to chase, capture and send you to the hospital. Or if they're unable to get you, then any dumb villagers left in the town will do. You know the type; the villagers that spend 10 years researching ancient Egyptian curses but still lock themselves in a Pharoah exhibit for the night.

If the monsters catch too many people, you lose.

To win, you need to banish the monsters from the town forever. Or at least until the sequel gets made. Each creature is defeated in a unique way, but it usually boils down to going to one place, picking an item up and delivering it somewhere else.

For example, to beat the Wolfman, you need to create and administer the antidote. To do this, you need to collect (blue) scientific items around the map and then deliver them to the laboratory to develop the cure. You then need to over power the Wolfman with six power (red) strength items, administering the antidote and freeing him from a life of swamp butt.

Except you won't be fighting just one monster. In standard mode you're versing three creatures, four on the challenging difficulty. 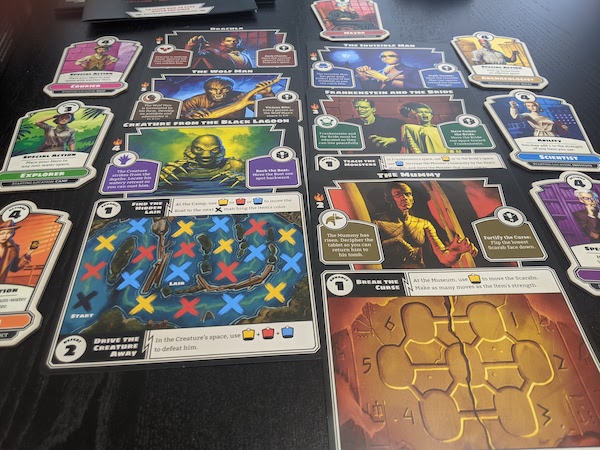 For your part, you'll start with a role with a special ability, and each turn take a number of actions; picking or delivering up items, moving, and pushing or pulling villagers. After which you'll draw one card from the monster deck. You should recognise this familiar flow from Pandemic. Though there's a key difference. Where Pandemic has faceless diseases ravaging the world, each monster in Horrified has their own rules, attacks, and special cards which give them personality beyond anything that Pandemic offers.

When everything gels, Horrified's board comes alive. The monsters are closing in every turn. The villagers are popping up in the most inconvenient places, and falling victim. Meanwhile the players are dividing their time between defeating a monster, and deciding if the clearly deranged villager Renfield is worth ferrying to safety.

However, as soon as you defeat one of the monsters. This aliveness begins to fade. You'll be drawing monster cards where nothing happens, because the monster who's meant to move has left the game.

This is a clear contrast with Pandemic, where the puzzle gets increasingly challenging as the time passes leading up to a climatic finish. Horrified starts challenging, and then becomes easier until you notice that it isn't a terrifying monster moving with every turn, but in fact a man in a suit struggling to move without assistance. 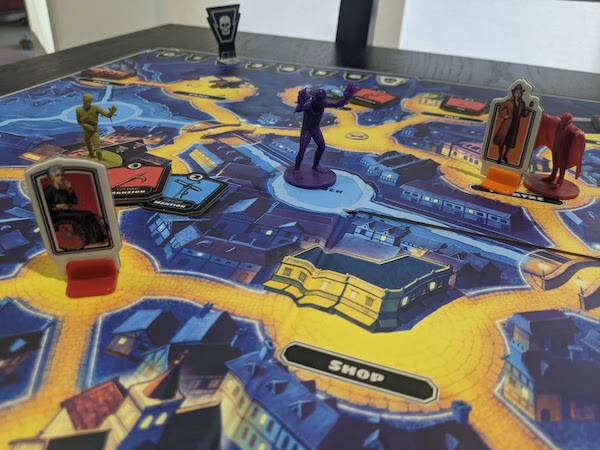 Overall, Pandemic has the better puzzle, and I believe it to be the better game of the two. However, it's also more grown up, and serious. Horrified leans into it's campy theme allowing it to shine, and because of this I found myself having more fun with the game. Even if it was a lot easier to win, and didn't require the same depth of thought.

When it comes down to answering the question about who comes out on top, it all comes down to personal preference. Do you want a puzzle requiring thinking turns ahead, and analyzing how to mitigate risk, or do you just want to have a gay old time stomping on some monsters' hopes and dreams? And how much re-playability can you get from either of these two options? For me, even though I enjoyed Horrified, I could see my interest wane after the fifth or so play. Pandemic, however, is still a game I find interesting after 30 or so plays. But what do you prefer?

Thanks for reading my review, I'm currently ranking all the board games I review at http://rolltoreview.com/the-board-game-list/.

san il defanso replied the topic: #323657 02 Jun 2021 22:27
We just bought this and played two games of it today. I really enjoyed it! Prospero Hall has really mastered the art of expressing characters and genres with the bare minimum of mechanics.

DavidNorris replied the topic: #323695 04 Jun 2021 09:23
Agreed! What stunned me about this game was their attention to detail and how they managed to create such a thematic game!

san il defanso wrote: We just bought this and played two games of it today. I really enjoyed it! Prospero Hall has really mastered the art of expressing characters and genres with the bare minimum of mechanics.

This kind of thing is totally what i want in games. Prospero Hall is at a standard price range here but I've been keeping an eye out for their titles- one just came up in a trade chain and this thread pushed me over the edge. Looking forward to it
Read More...