Dune Imperium is My Pick from 2020 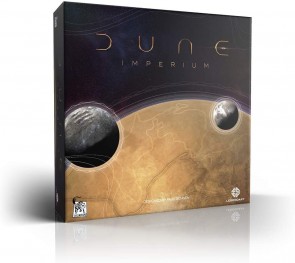 This game is phenomenal.

I'll start off saying I'm not a Dune fan. In fact I still internally debate the pronunciation of Bene Gesserit (Is it Be-en Jess-er-it or is it Benny Guh-sserit?). I haven't read the books, but I do have fond memories of the RTS game which came out in 1992.

This is my long-winded way of telling you, the Dune theme had 0 influence over me. Dune: Imperium won my heart through mechanics alone. Which considering how many board games I've played, is pretty damn impressive.

It's the loving baby of a solid worker placement game and a wildly powerful deck-building game. That is disarmingly easy to learn and to play, but forces you to constantly make tough decisions and trade-offs throughout its duration.

Each round you draw five cards and have two workers to play with. You play one card per turn and that card tells you which worker action spaces you're able to use. More advanced cards also have activation bonuses as well.

The tormented beauty of it is that you can only play 2-3 cards a round. Once you're out of workers, you have to reveal the rest of your hand; and use the reveal bonuses most cards have. This can be an influence to buy new cards, combat power to add to the conflict, or some other extremely powerful ability.

There is constant tension between wanting to play a card for a power or action, and wanting to keep the card for the reveal power. But it's a case of robbing Peter to pay Paul, except you are both Peter and Paul in this scenario.

It's an agonising decision space.

But it gets better. 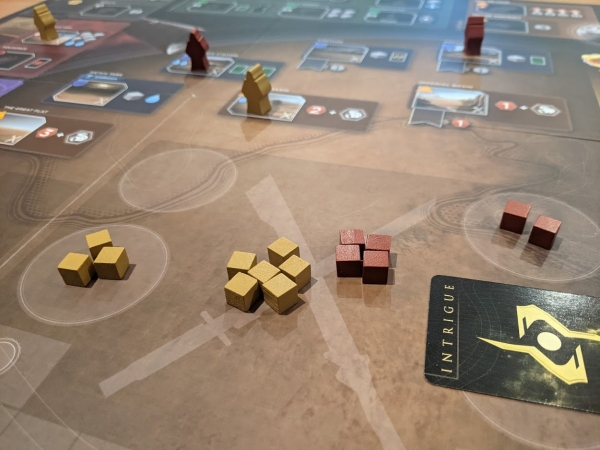 The conflict, gold has 6 cubes, red has 4, but has a hidden intrigue card as well.

Moving on to the board, there are four factions and each own 2 super strong worker placement actions. Performing these moves you up their faction track which will give you points the higher you go. The rest of the spaces are some combination of diplomacy, trade or resource generation. But outside of the faction spaces, what we really care about is if these spaces will allow us into the conflict.

The conflict happens after everyone has had a reveal turn. Anyone who's sent their brave cubes into the battle has a chance to win the juicy reward revealed at the start of the round. Giving you plenty of time to figure out if you want it (usually you do), and if so, how much you're willing to sacrifice to get it.

At the end of each conflict, all cubes sent to fight are returned to the supply as casualties. It's hard to get new cubes, so you have to think twice about sending into the conflict, because once they're in, they're not coming out. This becomes a mind game in itself. As combat power can come from three different places (cubes, revealed card bonuses, and intrigue cards) so you're never 100% sure how much combat power someone has until the conflict. The question you must ask yourself each round is: how much combat power do I need before it becomes wasteful?

Another awesome, but agonising decision that you need to be make.

But it gets better. 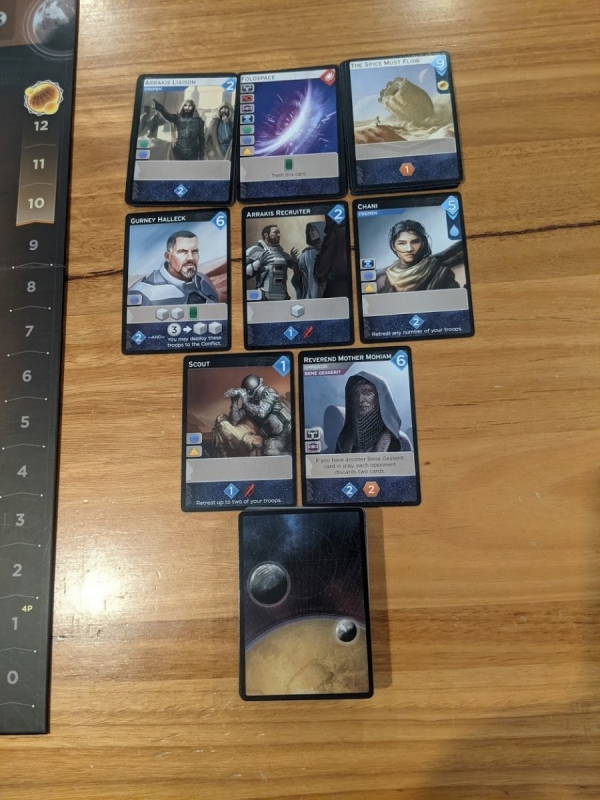 Examples of cards in the market in Dune: Imperium.

Paul Dennen has done an awesome job in creating these cards - as they're incredibly powerful. Which means, similarly to the Empyreal Spells & Steam, you can have these massive turns where you'll be blowing people away with your genius (and spice melange).

The cards being so powerful, and the market being so big, means that each game you'll be using a different strategy. Keeping the game fresh game after game. And while you may think this causes the game to be too random, having half your action be dedicated to picking a non-changing worker placement spot really balances it out.

I don't have a bad word to say about Dune: Imperium. It's a fantastic game, the decisions you have to make are hard, impactful, and constant. Each game I've found myself do something new and unique. And comes down to the wire regularly. I am enamored with this game, and it is easily my favourite of 2020 that I've played.