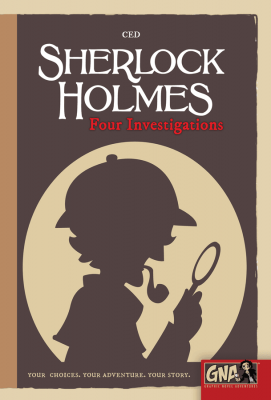 Publishers Van Ryder Games are famous for games like Hostage Negotiator and Detective: City of Angels. What you might not know is that they also publish a range of books, called Graphic Novel Adventures. As the name suggests, they’re graphic novels, but also fully-fledged adventure games, and Sherlock Holmes: Four Investigations is my first exposure to them.

Regular readers of mine know that I love mystery, and in particular, Sherlock Holmes. When Van Ryder offered me the chance to review one of the GNA series, I jumped at the chance. It’s a hardback book, and the first thing I want to mention is just how much I love the illustration in it. Holmes and Watson look nothing like I’ve seen them in anything before. The art is cute, distinctive, and absolutely full of character.

The game is afoot!

Playing a Van Ryder GNA is much like playing one of the old Choose Your Own Adventure books from the 1980s. You read some panels of the story, and then get given a prompt or some kind of choice over where to go next. Read the number on the panel, find the corresponding panel in the book (the pages have the panel numbers at the bottom) and flip to that page to continue the story.

There’s plenty of extras to find as well as the obvious points of reference; numbers hidden in hard-to-read places, and a series of typewriter keys hidden in the pictures throughout the book. These actually play a role later in the book, so be sure to keep track of how many you find. Every so often you’ll have to question witnesses and suspects, and this is where your first real agency comes into the game. 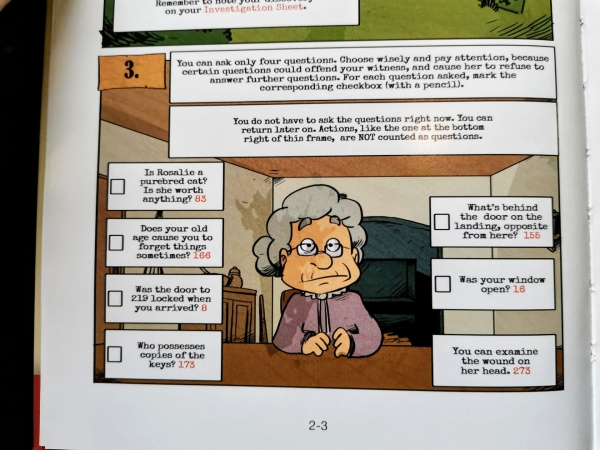 An example of questioning a suspect. This is from the tutorial investigation, so no real spoilers.

There’s a limit to how many questions you’re allowed to ask each suspect, and if you ask the wrong question you can anger them, and they’ll refuse to talk to you again. It’s up to you if you choose to ignore this, or even the number of questions you can ask, but you’re only spoiling the experience for yourself if you do.

You see, but you do not observe

I really love the attention to detail in this book. Clues aren’t just in the words the characters speak, but in everything they do. You can see when someone is flustered, you can look at the details of their clothing, and the room you’re on. It’s even worth noting which hand they’re using when they hold something – you never know when it might matter. You won’t solve the cases unless you pay attention.

There are two ways to take on the investigations. You can play as Watson, which I like to think of as easy mode, or Holmes, which is really the best way to play in my opinion. Watson can ask more questions of a suspect, and has a deliberate, methodical explanation of what’s happened at a crime scene, whereas Holmes needs to be choosier with his interrogation, and has to make deductions based on the known facts. If you’re coming to this book with any kind of an interest in mysteries, play as Holmes, it’s more rewarding. 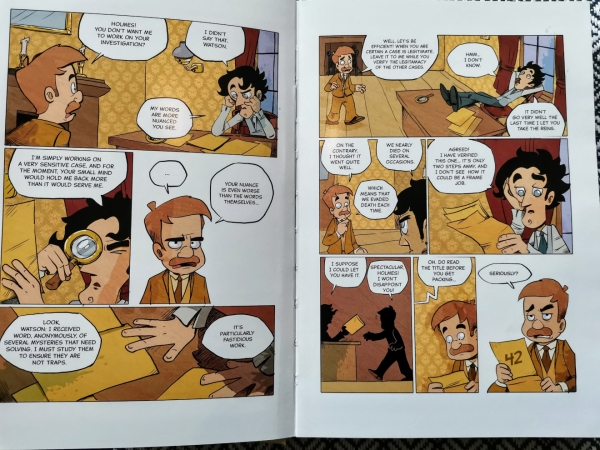 I love the artwork, and Watson’s long-suffering expressions throughout.

You’d be forgiven for thinking the comic-book styling would make this a child-friendly adventure, but it’s not. Despite the cutesy artwork and humour embedded into Watson’s long-suffering expressions, there’s murder throughout the story, and even a little bit of torture. Nothing graphic, but not really something I’d want my eight-year-old looking at.

I can’t really tell you too much more about the book without ruining it for you. The story and writing throughout is brilliant. It all feels very Holmesian, with a good splash of humour thrown in for good measure. It’ll take you a few hours to play through, and there’s probably not much replay value, but I could easily see myself coming back to it in a year’s time, much like I would with a good book.

The mysteries aren’t too difficult, but they’re certainly not easy. I managed to solve it on the first try, but when I read the solution, there were some links I just hadn’t made. Holmes’ nemesis, Moriarty, has hidden some extra puzzles throughout the book too. If you find them, they’re actually pretty tricky to work out, but equally rewarding.

Sherlock Holmes: Four Investigations is a must for anyone who loves Holmes, interactive mysteries, or a longing to play those Choose Your Own Adventure books again. It’s clever, funny, charming, and beautiful. I sat in a big, comfy chair with a whisky when I played, and it’s an experience I can’t wait to recreate when I get more books in the series. It’s not always easy to pick-up the Van Ryder books in the UK, but if you can, I highly recommend doing so.

Review copy kindly provided by Van Ryder Games. Thoughts and opinions are my own.

July 12, 2021
Rating
4.0
Sherlock Holmes: Four Investigations
Choose Your Own Adventure books meet Sherlock Holmes and a unique, cartoon style. Do you see, or do you observe? It’s clever, funny, charming, and beautiful.
A
adamr 1 reviews