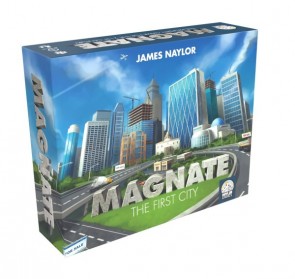 James Naylor’s Magnate: The First City is the kind of game that seems like it shouldn’t exist in today’s gaming ecosystem. It’s a fairly complex economic game with a city building conceit that works shockingly well as a satire for the rapacious, boom-bust capitalist exploitation of the real estate market. And it rightly includes PAPER MONEY, which should be the absolute standard for any game where you make money.  It’s also a rather atavistic design – if I’m going to do that thing where you say “this game is like X, Y, and Z” the comparables are titles that are decades old. It puts me in mind of the great Sid Sackson titles Acquire and Metropolis. There’s undoubtedly a trace of the late Franz-Benno Delonge’s Big City. And maybe it’s the advertising tokens talking but I can’t help but reference Tom Lehmann’s long lost Fast Food Franchise and there is a sense that Ted Alspach's recent Suburbia was an influence.. I’m sure Mr. Naylor will be well pleased to find that I’ve classed his game among these greats.

And Magnate is in fact pretty great, once you make your way through what I think is a steeper than usual learning curve. I’ve been playing the game for quite a while thanks to an prototype copy I was provided but I was still thankful that the production copy shipped with an absolutely smashing tutorial that I would rank among the very best that I’ve seen in the board game space. It’s a deck of 70-odd cards that walks you (and up to four other players) through every aspect of the game in a step-by-step way. But more importantly, this sequenced deck of cards explains why scripted choices are made and they also encourage players to learn together by analyzing plays. It’s almost weird to have quiz-like questions posed to you while you are learning, but even in the asking important nuances are revealed. 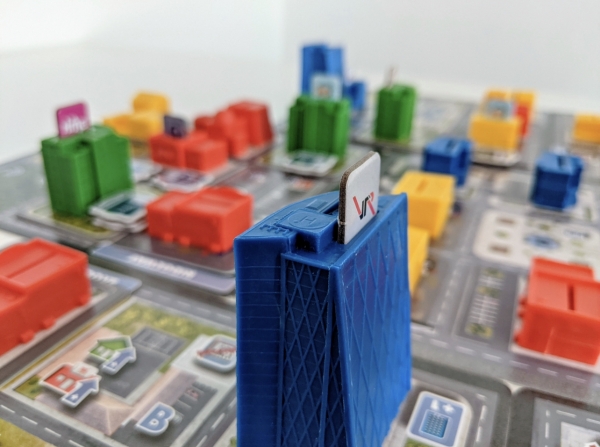 Once you and your group of rapacious, boom-bust capitalists are off the rails, what emerges is a compelling mix of long-term planning, zoning, speculation, opportunity assessment, risk-taking, and outrageous fortunes. The general idea is that you buy up plots of land that you later develop into residental, retail, industrial, and office properties in hopes of attracting tenants and increasing the value of your holdings so that you can flip them in a hot market. Proximities and adjacencies across the modular board are paramount, as they increase the desirability of your spots when it comes time to roll a handful of dice to see if you can bring in tenants. Nobody wants to live next to the airport or industrial park and a long-haul five spaces from work. Everybody wants to live by a beautiful park, bountiful shopping, and a short walk to office.

Over the course of the game you’ll see a lovely cityscape emerge with fun colored plastic buildings springing up. The Sim City vibe is strong here. But this isn’t a game, really, about urban betterment and pride of ownership. It’s about building it all up and then divesting yourself of properties, stuffing your wallet (an actual game component) with those sweet, sweet paper simoleons before the market collapses and you ride off into the sunset in a cherry red Lamborghini Countach blasting Pet Shop Boys’ “Opportunities”.

Now, what makes this game something borderline extraordinary is how it manages the property market. As it goes on the property values just keep going up and up due to a number of factors throughout the design, all dependent on player actions and choices. You’ll watch the marker climb right on up the scale and salivate at the potential profits when you decide to cash out your investments. At the same time and on the same paradigm, the dreaded market crash marker makes its way down, driven by Risk cards and other player actions.

The neat thing is that you, as the rapacious, boom-bust capitalists serving as the hidden hand behind the market fluctuations, operate with the knowledge that both appreciation and depreciation are your fault. You know the big bust is coming, you know that growth is untenable and unsustainable. If you don’t play smart you can wind up completely wrecked. But if you learn to master this market, you can get very, very rich in Naylors (assuming that it’s James and his family pictured on the bills).

There is commentary here that I appreciate, this is a game not just about making money and selling properties. It’s an effective criticism of how this rapacious, boom-bust capitalism works in the real world.  It’s rare that a game actually has something to say other than “be clever” or “have fun” but I think the message here is pretty clear- especially in how it makes you feel.

In a lot of development games, there’s a sense of ownership and captaincy that’s rewarding. You look at the board and you see your holdings, the things you’ve accomplished in the game’s system. Or, in more economically focused games, you see your rail network or your hotel chain or whatever and you get a sense that you’ve created a profitable engine. But in Magnate, I don’t give a shit about notions of “my city”. The buildings are just fly-by-night money-making opportunities in gentrifying neighborhoods, the people in them are abstracted tokens that are nothing more than profit-drivers. I’m not putting together an economy to grow my potential to build more or accomplish more. I’m exploiting all the above for a quick buck and trying to hit the crash losing as little money as possible.

It’s ruthless, although you’d never think it from the way it looks – the colorful illustrations, the friendly fonts, the fun little toy excavator that serves as the first player marker. This is where it reminds me most of Acquire – a simple bingo game with a numbered grid that actually is about positively brutal scorched earth mergers and acquisitions. There’s a meanness about this game that I love, and there is plenty of interaction and codependency to support a sense of intense competition between players.

It’s a two to five player deal and it is definitely best (and longest) with five for maximum market volatility and jostling for spaces and tenants. It’s rated at 120 for the maximum playtime but I think the reality for most folks is that with a full table it’s going to come in at 160 minimum. There’s a solo bot provided, and it is engaging but unlike humans it doesn’t groan and look crestfallen stuffing their wallet with less money than they paid to purchase and develop a property. You want that feeling.

As you might have guessed from the preceding review text, Magnate is a very math-y game and that may be its weakness, especially at my table. Speaking as someone who got a perfect SAT score in verbal and an extremely imperfect score in math, I find a lot of the valuation and calculation to be beyond what I really like to do for fun. With economic games like this I tend to ballpark numbers and go with my gut, and thus I tend to do pretty god damned badly at them. But I do love games that let me slip into the hideous tassled loafers of a rapacious, boom-bust capitalist, and this a great modern example of the genre.

sornars replied the topic: #327975 15 Nov 2021 11:10
I think one of the most interesting things that Magnate does thematically is that the economy is not closed amongst the players. You buy your properties from the bank and you sell them back to the bank. The other players at the table are fellow developers and are smart enough to not buy from you. That feeling of deflation Michael mentions is one borne of pure greed - it's not that they got the bad end of a zero sum deal, it's that you got a better deal from "the bank" and they're jealous. Furthermore, even if you play poorly it's almost certain that you'll still end the game a millionaire; with more than the $2 million you started with. The real bagholders are the poor suckers that you've been selling to on your way to the top and they've been abstracted away as "the bank" as they really don't matter to you as a developer.

The other interesting thing to note is that it's relatively easy to manipulate the risk deck through collective action. If as a group you decide to not sell too aggressively and nurture Humbleburg's economy like good stewards you can draw this game out for a very long time, accumulating a minimum of risk along the way. There is no player incentive to do so but it shows the hope of businesses self-regulating in the interests of society.

Oath is the first game I've seen do the tutorial deck walkthrough and I'd be glad to see it become an industry standard, particularly how both Oath and Magnate take the effort to explain the why and the how in equal measure.

Another great review of a great game!