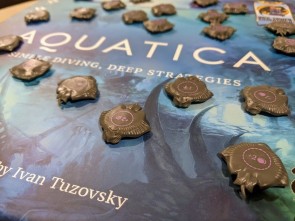 The answer we've been searching for: what goes on in the sea when no one's watching?

Over 80 percent of the ocean is unexplored and unmapped. It's one of the last great unknowns for humankind. Making it easy to imagine civilizations of creatures hidden in its' depths. Creatures with their own thoughts, feelings, infrastructure, commerce, and even war.

This is the story behind Aquatica, an engine building card game set in the depths of the ocean.

The Great Kingdoms have spent centuries building their world, raising their kids, constructing their cities and prospering. But now their resources are exhausted, and they will have to fight and influence for what's remaining.

If you've played Concordia, you'll be familiar with the gameplay of Aquatica. Everyone begins with the same set of 6 starting cards, and each turn you'll play a card and carry out the action. Eventually, you'll play the Matrona card and pick up all cards you've previously played.

Play continues until one person completes 3 of 4 end game objectives. 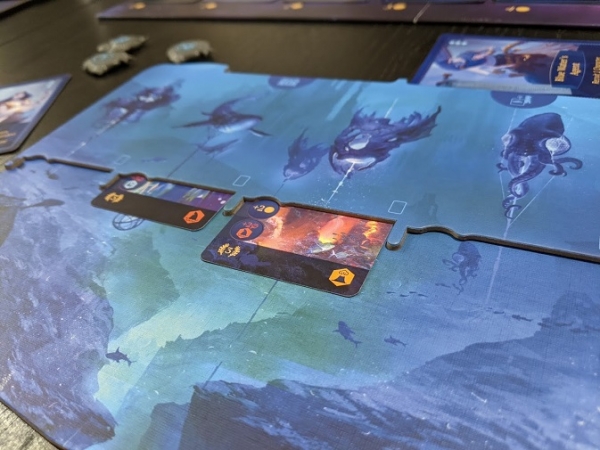 Throughout Aquatica you'll be acquiring locations either with money or force. Once gained, a location goes into your personal board. Which is double layered cardboard, with space for you to slide location cards underneath a top layer. Leaving resources the land provides uncovered and in focus.

A location may have a number of resources, but you only ever have access to the top one. But once you use up the resource, the location will rise or float to the surface of the ocean. An action you'll mimic by pushing the card further up your player board, covering up the used resource and unveiling a new one to use.

These resources are either money, power, or a special ability and can be used instantaneously and for free on your turn. Comboing these resources is together is how you bring your engine to life. With each use you're pushing cards up. A good combo makes you feel like an underwater DJ.

The one and done use of these locations creates a Snapchat economy where, even though there aren't any filters, every resource is temporary. In all my games, I couldn't turn on my engine to consistently produce what I needed, and was constantly on the look out for new ways to stay afloat. I found this hunt for the best combination infinitely engaging, as I always had a number of options available.

Whether it was recruiting a new card to my hand, or a clever use of the mantas, which provide some instant resources once a round. 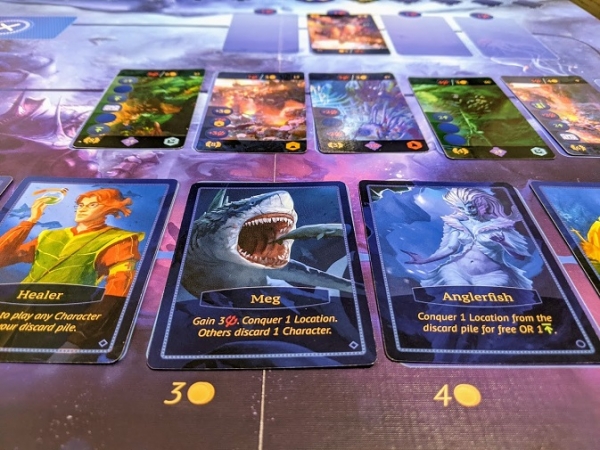 I adored the end game objectives. They gave each game their own flavour without changing the game drastically. In one game I was chasing conquering locations like Ghengis Khan, while the next I was focused on recruiting heavily. But what interested me more, is that when claiming an objective I needed to surrender a manta ray.

Basically, I had to handicap myself to get closer to victory.

I had a tough, but fun time reconciling this. And who can blame me?

You're saying goodbye to free resources.

But each objective is worth a lot more if you're the first player to achieve it. Therefore, you'll need to temper your greed. It's a tough choice. And one you'll get better at as you continue to play. As one of the surprising aspects of Aquatic is how startlingly quick the game finishes.

Unlike other board games in the genre which allow you to run your completed engine for a few turns before ending the game. Aquatica finishes right before you put the final touches on your engine. I found this so weird, and frustrating. As the game allows you plan out deep multi-turn strategies but then never lets you finish them. Like a fire alarm going off during your meditation, it completely breaks your chain of thought, leaving you unsatisfied and asking what just happened? 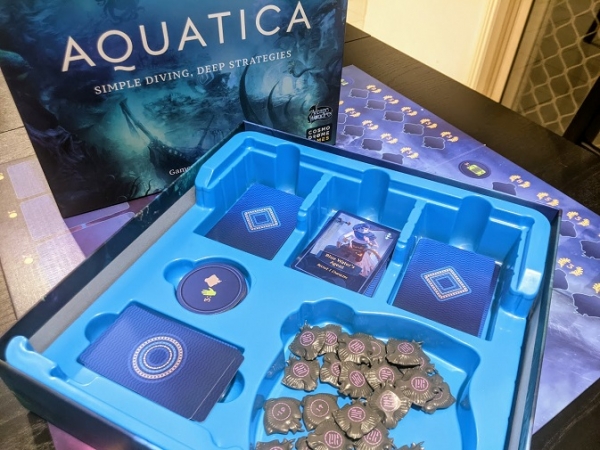 Overall I enjoyed Aquatica, it's a good game but reminded me a lot of Nic Cage's 2009 movie The Knowing. Fantastic premise, and execution up until the final minutes of the movie, where everything was ruined by the ending.

I feel if you've had experience with engine builders before, you'll feel let down with this ending, and would be better off getting something like Jump Drive or Res Arcana. However, if your only experience is Everdell or Wingspan, then Aquatic offers no more rule complexity, but more and more interesting opportunities for strategy. 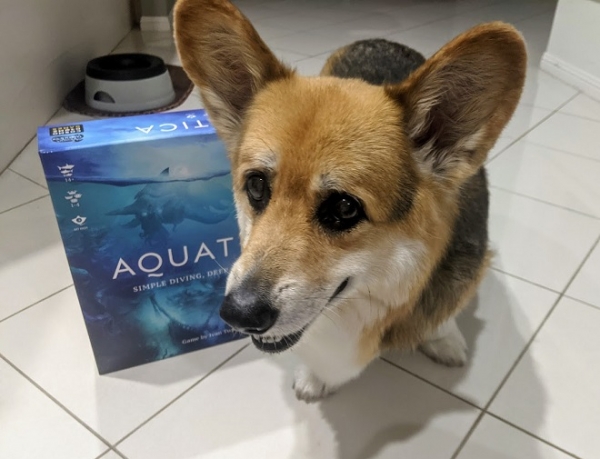