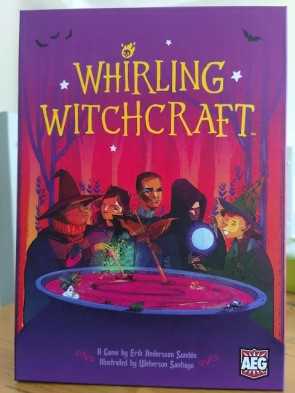 Whirling Witchcraft is a lean mixture of engine building and resource management, couple in with a neat overfill mechanic that has you directly influencing other players resources in order to score and win.

When you finally sit back like Admiral Ackbar in The Return of the Jedi, realising that your work is done and you've nailed that mechanic in your game, playtesting it until you've refined and distilled it, so that all there now is wonderful purity of intention and execution. There's always the temptation to bloat things out, to add in those little extras to extend things just that little bit more for the sake of content. We've all played those games where you can see they gave into temptation, and the mechanical star of the show has grown arms and legs and while you're enjoying what's in front of you on the table, you can't help but thinking that it would be better with some of the fat trimmed away.

Whirling Witchcraft is a lean mixture of engine building and resource management, couple in with a neat overfill mechanic that has you directly influencing other players resources in order to score and win. You take the role of a witch, using various ingredients from your workbench and combining them in recipes in order to fill up your cauldron with your cooked potion of new ingredients. Once you've completed your recipes for that round, you'll then pass your completed cauldron to another player, and they'll take your ingredients and add them to their workbench.

This is where things get interesting, as each of the workbenches have a tracker for each of the available ingredients. If you force a player to exceed the number of spaces for that ingredient when they take on your cauldron, then you get the excess back. Collect five excess ingredients and you win the game.
This puts you in the situation where you plan for the next ingredients you want used in the recipes that you have in your tableau. but you also want keep an eye on what you want to over produce in order to collect any excesses to help you win.

Recipes are added to as the game progresses and cards swapped with opponents so no one has the upper hand in any particular round. Every time you play a new recipe card, you'll also have the chance to fill up more of the Arcane meter. As you fill this up then you'll unlock an ability to use for that round. It might allow you to remove ingredients from your workbench, or take directly from the supply instead. You'll sometimes play a sub optimum recipe card in order to let you use several Arcane powers at once. In a strange oversight, while the rule reminder cards contain the main game aspects, they neglect to include the Arcane powers, so you'll need to keep the rulebook handy for those until you learn them down the line. It's not unknown for newer players to forget the Arcane powers are a thing and they can really turn the tide in a tight spot in the latter parts of the game.

Whirling Witchcraft does a huge amount of right. Those familiar with the game can use different witches that will give different starting ingredients but also offer once a game powers that can be played to cause mirth or mischief. This adds an extra layer of gameplay once you have played a few games and want to bring in some further changes to how the game can run. It's not here to take up hours of your time either. Games can be over within forty to fifty minutes once you know what you are doing, though I would expect that to shorten even further once you're getting into how the main mechanics work. It looks amazing with the miniature cauldrons and delicious artwork really adding to the table presence. I'm a big fan of the artwork from Weberson Santiago, it really helps to make the theme sing, and brings out the various characters really well.

What really makes this shine for me is that excess ingredient mechanic, that really works extremely well in providing a race to the finish and can also give some really tense finishes to game, especially since there is nothing to stop simultaneous play, and the resulting cauldron swap can happen all at once. There really is nothing better than watching you opponent having to place cubes down on their workbench and you both knowing that they'll be passing the winning excess back to you.

A delightful recipe for how you do competitive gameplay right without an overabundance of additional bells and whistles for the sake of it. It's extremely confident in what it is offering you as a game. Will definitely be getting this back to the table, just a question of when will we three meet again?

If you would like to support more written pieces on the blog then please consider backing us on Patreon.