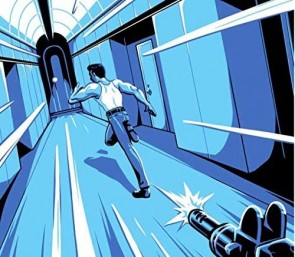 Barrett Publishing does a pair of small-box solo games (with viable options for a duo) under the Hunted brand. I’ve been particularly impressed by them in terms of providing a minimally packaged and challenging narrative-forward experience with an agreeable setup and execution time and a few novel quirks that elevate them above similar fare. One of those quirks is that both games – Mining Colony 415 and Kobayashi Tower – are very specifically homages to two of the great ‘80s action pictures: Aliens and Die Hard, respectively. It’s almost refreshing in this day and age where “

Both of these tastefully presented monochromatic games run on a very similar chassis with just a couple of differences to account for unique details between the pair.  The core mechanisms oddly put me in mind of divergent influences such as Shadi Torbey’s Onirim and Corey Konieszcka’s widely beloved Space Hulk: Death Angel. Cards are drawn from a Hunted deck to form a row. Each card is multi-function, and along the side are a series of icons indicating the resources that are available to spend on other cards in the row. So if there’s a weapon or other piece of equipment in the row you might need for there to also be a couple of Search icons available on other cards. Moving through the Mining Colony or the Kobayashi Tower to get to a final boss is the central objective, and doing so requires Move icons to navigate Corridors and sometimes Keys to open doors. There is a separate set of Location cards, each which provides an effect that provides atmosphere and a sense of transition between scenes.

There’s a push-your-luck element to these card draws, which are the primary action in the game. In addition to harmful traps and events, there are also Aliens or Terrorists in the Hunted deck. When one of these adversaries appears, you are being titularly hunted. There’s a Hide option you can take rather than draw, but that means that the entire row – and all of the resources and potential advantages – get flushed into the discard pile. But sometimes cards in the row have Noise icons, which means that an attack might trigger before that second draw. So you can never be sure of safety,

Combat is one of the chief ways the games differ and I am very squarely in favor of Mining Colony 415 in this regard. Both games have more detail than expected- you have to have ammo for your weapons and spending “magazines” is a thing here, as is the possibility that you actually run out of them it is really is game over, man versus the aliens but you can resort to punching the baddies in Kobayashi Tower. Kobayashi Tower uses a dice pool resolution with possible rerolls, which is really fun and all because you decide how many bullets you want to shoot and throw that many dice with different dice for each weapon, but Mining Colony offers adexterity element which is extremely rare in solitaire games. And it’s a really smart, neat implementation. Different weapons have differently shaped and sized tokens and you throw these onto a picture of an alien that you put in the box lid. If your shots land in a small target zone (with two options for difficulty level), it’s a hit. I absolutely love this.

As far as other differences, on Mining Colony 415 there are crew members that you must rescue on your way to the Landing Pad and your rendezvous with the alien queen. Fail to do so and – you guessed it – birth aliens to kill you. There’s also sentry guns, motion trackers, grenades, and all the SF trimmings.  Kobayashi Tower has similar functions with Hostage cards and a modern set of weapons. There are some changes in Kobayashi Tower that I particularly like such as how taking down Terrorists gives you card draws. It’s a great way to build narrative. In one game, I tossed an office chair at an assailant and took him. The card I drew from him was…another office chair. So in my head game I imagined my “Shawn McBain” character realizing the utility of the furniture and simply wheeling the one he had thrown into the next encounter. You also start with a box of expensive chocolates, that you can spend for a reroll but then if you succeed in defeating Lars and saving Sharon you’ve lost her Christmas present. Unless you manage to find it again, which almost feels like a subplot as you play.

There’s a lot of tension as these plots and subplots unfold, not just due to the push-your-luck nature and limited resources but also because these games are on a timer. Every time you shoot or reload, time goes down a tick. This also occurs due to the effects of some cards. I’ve found that my L’s have been more because of time than because of running out of HPs, but that’s fine because getting low on health also means that in Mining Colony 415 you get a smaller Test token to check for success/fail on any skill checks that may come up, in Kobayashi Tower you get one less die to roll versus them. So even if you don’t “die”, there’s still an impact from getting beat up.

The two player variant is a good way to play with a partner, but it still feels like a two-handed solo game. It requires a mechanical contrivance where players have an individual row and also a shared row. It can create some interesting decision points as to how to spend resources or move cards to the shared row, but we’ve found that the game is somehow easier. It’s designed to be a solo game, so the two player variant should be regarded as a sideshow.

I think these Hunted games are both quite excellent examples of current solitaire game design and I’d easily slate them in the upper echelon of what I’ve played in this space. They set up and play quick, respect your time, and pack up easily in small boxes that respect your space.  But they are offering ample detail, atmosphere, and setting and I especially appreciate that these games are “inspired” by popular IP, which makes the homage feel more authentic and heartfelt in some ways than I’ve seen in other games out there with official licensing.

charlest replied the topic: #329177 31 Dec 2021 11:00
I think these two games are very enjoyable little solo experiences. Kind of fill a similar space to Space Hulk Death Angel, while being in print and available.

The dexterity aspect of Mining Colony makes me prefer that one by a tad.

BackBurnerGames replied the topic: #329376 05 Jan 2022 12:50
I was tapped by Gabe Barrett to write some vignettes for his adventure game in the Hunted series, Hunted: Wode Ridge, which is currently being produced post-Kickstarter. Like the first 2 Hunted games, Wode Ridge is a love letter to movies like The Goonies and series like Stranger Things. Players work their way through an adventure book, guided by dice rolls and a hand management mechanic that forces you to spend time and health while collecting evidence on the way to defeating the evil that threatens the town. It looks pretty cool, and relies heavily on the theme throughout the game.

I've also got the PNP files for Kobayashi Tower and Mining Colony 415, and am looking forward to giving those a whirl.
Read More...