Fight an Old Man with Goggles in The LOOP 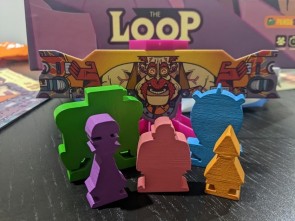 It’s this last question that Maxime Rambourg and Theo Riviere want you to answer in The LOOP. A cooperative game where you battle a mad cosplaying scientist, Dr Faux, across the timeline.

Apart from parading around his sweet drip, Dr Faux will be creating clones and causing time rifts. Too many time rifts create a time vortex. And too many vortexes... Well, it's the end of the world as we know it.

As a member of the Agency, this is bad news. You need to stop Dr Faux’s plans by working with other agents, collecting powerful action cards, completing missions, closing rifts, and most importantly: LOOP! If you’ve played a deck-builder like Lost Ruins of Arnak, or Clank! A Deck-Building Adventure, you’ll be familiar with the pattern of play. You start your turn with three action cards, you use them until you're out of actions, and then you discard them like the Valentine’s Day card you gave your fourth-grade crush. Afterwards, you’ll draw three new cards in preparation for your next turn.

The LOOP sticks to the same formula with one simple twist:

After you’ve used a card, it sticks around in your play area. Then, if the space you’re on has energy, you can use that energy to loop. Un-exhausting all cards of the same suit. Meaning, if you’re lucky, you can take your turn again.

This mechanic is unbelievably fun.

The sheer satisfaction of pulling off the perfect loop is reminiscent of recalling the name of the song that's been in your head all day or laying down on freshly cleaned sheets. Alone each action is powerful, so being able to eke out one or multiple additional actions is a great reward for the thought work you must put in.

And there’s a lot of thought work to be had. With a great turn, you might be performing multiple (that’s right multiple) loops, and chaining together 6-9 different actions.

While there’s no downside when you’re plotting your perfect move, across the table can be a different story. Waiting for someone (or someones in a four-player game) to work through all the permutations of moves they could do can draw on. And even when they’re performing their actions on the board it’s hard to follow their thinking. Making it more like watching a magic trick than playing a board game. You don’t understand how they’re doing what they’re doing, but you sure hope it’s legal. While looping is the leading star of The LOOP the supporting cast aren’t slouches either. The first of which is Dr Faux’s Machine. A temporal basketball hoop where each turn you must drop in several red time rift cubes, depending on the number of clones on the board. This machine randomly spits these cubes out into one of three eras (spaces on the board).

An era with four rift cubes becomes a vortex.

Four vortexes across the board or two vortexes in the same era, and it’s GG.

Even though you need four rifts to make an era explode. You’re usually dropping 3-5 cubes. Meaning there’s always a chance to get unlucky. So even at your most confident, there’s that voice in the back of your head letting you know that this is the turn it all falls apart.

No mechanic has come close to being this anxiety-inducing in a long time. It's so bad that if I oversaw the next blockbuster horror movie I would, without a doubt, make Dr Faux’s Machine the villain.

It reminded me of Pandemic: Fall of Rome, where they changed the disease removal to a dice roll. Initially, when I read the rules, I thought I’d hate the randomness. But it turned out the opposite. The uncertainty within these mechanics gives these games an edge. It allows for you to hope, and it allows for that hope to be cruelly crushed. Much like your fourth grade Valentine's day.

Yet even with this random element, you never feel like the game is out of control. And when you lose, it’s not because the game is unfair. It’s because you suck. Taking Down Dr Faux in The LOOP

To beat the fabulously dressed, but evil Dr Faux you’ll need to complete four missions. While there are seven missions in the game, only two are face up and can be worked on at a time.

This creates a dynamic path to victory in every game. And makes The LOOP feel like a mystery box each time you set it up. You never know what’s coming next until you flip over the next mission tile. And in doing so, your whole approach to the game might change.

Making matters more volatile, is if a vortex breaks out on one of your mission tiles – it’s gone. In our plays, we’ve had missions where it was all but complete disappear. While this can be frustrating, we found it fitting with the theme and tone of the game.

Speaking of the theme, whatever they’re smoking over in the Pandasaurus Games HQ. It would be illegal in Australia. From wildly vivid colour scheme to the ridiculous number of pop-culture references, they had fun creating The LOOP. While originally, my body rejected the theme as though it were attacking a virus, but over our plays, it wore me down and won me over. Down, Up, More Energy

So far, we’ve covered what everyone will remember of The LOOP, but two things tie it all together.

The first is the restrictions around movement.

Moving around the different eras is a big part of the game. However, with one exception, characters can only move one adjacent era for free per turn. To move further you’ll need to rely on the second thing tying The LOOP together: energy.

Energy is used for moving, looping, and completing some missions. It is the enabler of combos, but also a shared and limited resource. So, if I use the energy on my turn then you won’t be able to on yours. Thereby, making energy efficiency a puzzle within itself.

It’s this unique combination of the tower of terror, the varying missions, being able to loop, and energy efficiency that makes The LOOP the best cooperative game I’ve played since Spirit Island. And while I do wish the characters were more interesting, and for more missions. There is already more than enough in the box to satisfy even the most avid of gamers. Thanks for reading. Find more reviews at Roll to Review, where I'm ranking all the games I review. The LOOP currently ranks 11th out of 86 games.

January 20, 2022
Rating
5.0
The LOOP
The LOOP is a familiar take on deckbuilding with more twists and turns than a bucket full of knotted Christmas lights. Add on a theme that's as pulpy as it is ridiculous, and you got yourself a game that's worth talking about. If you're a fan of cooperative games - you NEED to play The LOOP.
D
DavidNorris Top 50 Reviewer 10 reviews