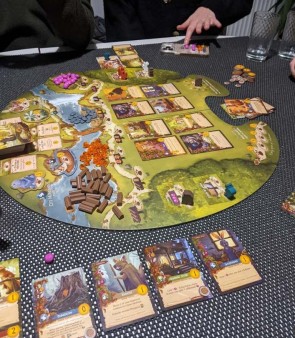 Boardgaming is a hobby that has its heart in the world of the physical. Despite all the virtual tabletops that have allowed us to play together over the last couple of years, we will always return to the real world table. The weight of dice. The feel of cards. The shape and colours of meeples, chips, and tokens. These are the things that connect us to boardgames.

The quality of production in boardgames has become a major consideration for publishers of all sizes. You want to create a presence, to draw people in. The first bite is with the eye, the old adage goes. Everdell designed by James A Wilson, published by Starling Games, and with art by Andrew Bosley draws you in like this. With its gorgeous box art, beautiful components, and big cardboard tree it calls you to the table. Is it more than just the flash? Does it have some bite for all its bark?

Everdell is a simple enough proposition. Each turn you’ll send one of your lovely animal meeples out into the forest to gather some resources. Merrily they will scamper along gathering the gnarled wood, sharp amber, smooth stone, or squishy berries (they are actually squishy) that drive the economy of the woods. If you don’t want to do that you can always turn those resources into a new card to add to your city. Perhaps you’ll construct a new building or invite a critter to move in. The aim is to have the best city by the end of the game, with points from all your cards pointing to the eventual victor. 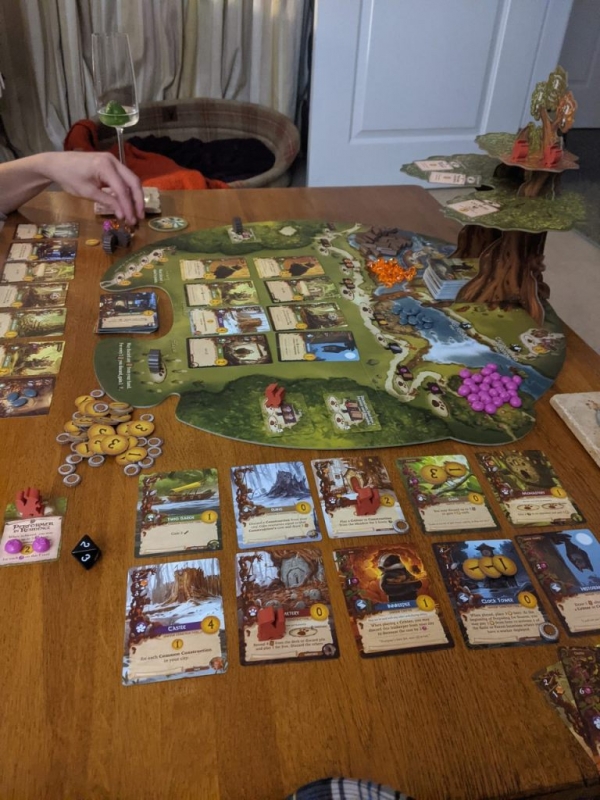 Everdell starts out very gently. With only two meeples to your name, you can’t gather that much, your ability to buy cards restricted to what you can scrape together with some clever play. When you run out of moves to make you move to the next season: we start in winter and move through 4 seasons to the end of the following Autumn. This gives you all your meeples back, plus some new arrivals. As you do you open up spaces for your opponents to occupy. In the world of Everdell not everyone experiences seasons at the same time.

Now you have more choices, more to think about but the first few turns have given you time to get a grasp on the fundamentals. In this way Everdell has a tutorial of sorts baked into its structure, something I wish more games would embrace. It then ramps up the choices as you get more workers each season. In less competent hands this would lead to an odd change of pace as you get more to do in later rounds, leading to a feeling of the game stretching out as it reaches its conclusion. However, the quick turns mean that the game loses none of its brevity as it lunges towards the finish line. 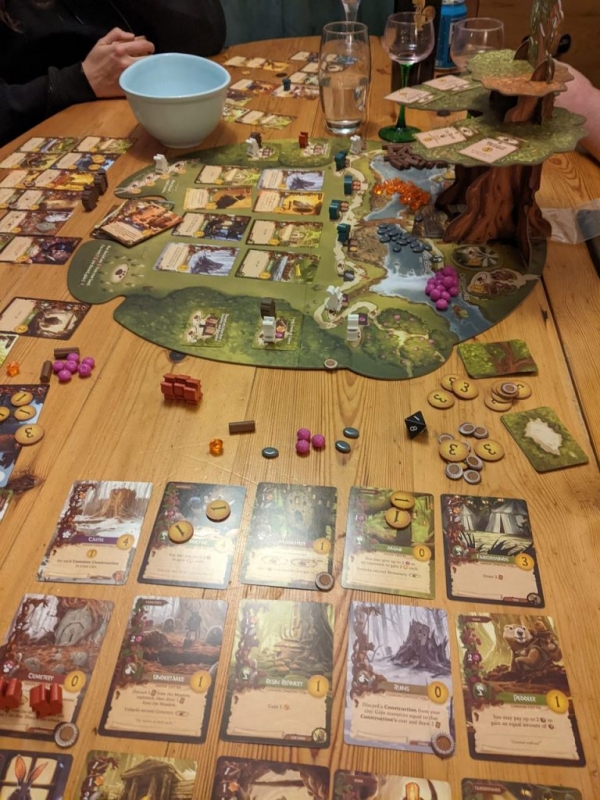 Those squirrels are having a lovely time in my cemetery I assure you.

The worker placement is only half the story though. The cards are where the real meat, and precious points, of the game lie. Each card is a beautifully illustrated construction or critter to add to your city. The graphic design is clear and precise, down to showing you how many of each card reside within the deck.

The cards have all sorts of abilities from enabling the gathering of resources to employing workers on a permanent basis at the monastery or local dungeon (they definitely aren’t being locked up). Like the choices that build as you advance through the seasons the complexity of your city increases as you add more cards. I’ve introduced this to folk fairly new to hobby games, only to see their initial trepidation turn into card combo mastery by the end of the game.

Some cards have a natural combination, with some of the animal residents becoming free if you have the building that supports them. This can lead to some players getting lucky with combos, whilst others struggle a bit. Everdell isn’t one of those games where you can look at your starting hand and form a long term strategy there and then. It can certainly point you in a direction, but this is a game where embracing a bit of improvisation is the key to winning the day. Players will grab the cards you want, or grab the space you need, but another idea will pop up in the turn of the cards.

Everdell is a game that has a gentle, built in learning curve, easy to teach rules, and some of the best production in the business (did I mention the berries are actually squishy?). It’s a very simple design that has loads of scope for you to build beautiful rural idylls, or nightmarish dystopian cityscapes. It’s charming without being twee. The production is excellent without being excessive, yes even the tree. At the end of each game I love looking over the story of each player’s city and imagining what it would be like to live there, to walk the streets of my city and say hello to the hedgehog doctor or the turtle judge. I hope you’ll visit some day as well.

March 03, 2022
Rating
4.0
Everdell
If you go down to the woods of Everdell will you come across a farm based idyllic city or a nightmarish dystopian town? The choice is very much yours.
T
thegiantbrain Top 50 Reviewer 36 reviews