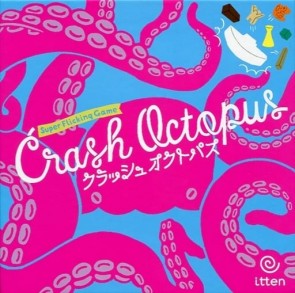 The seas whip around your vessel. Lightning crashes and winds build to a deafening crescendo. The boat bucks beneath you, threatening to throw you free or overturn completely. The skies break above you and you enter the eye of the storm. Treasure from those less fortunate than yourself floats on the surface of the water. As you fill your holds, there is another swell. Has the storm returned? You stare in horror as one giant tentacle after another breaks the surface of the water and the Crash Octopus makes itself known!

Crash Octopus was a big hit on Kickstarter last year and has just started to reach backers including my co-host Jamie. The game is designed by Naotaka Shimamoto, the artist is Yoshiaki Tomioka and the original publisher is Itten Games.

This is a game that wows on setup and just makes you want to pick up all its pieces. From the lovely chunky Octopus tentacles and head, to the play area limits shown by a thick string, every piece feels satisfying to play with.

The game itself is a simple dexterity affair. Balance 5 bits of treasure on your boat to win, or have the best treasure on board by the end of the game. You can move treasure to your boat by flicking it into contact with the boat, being careful not to dislodge any already loaded aboard. Alternatively you can navigate your boat to a new location within the play space by flicking a little anchor to a new position. This would be all straight forward enough if it wasn’t for a couple of clever bits of implementation. 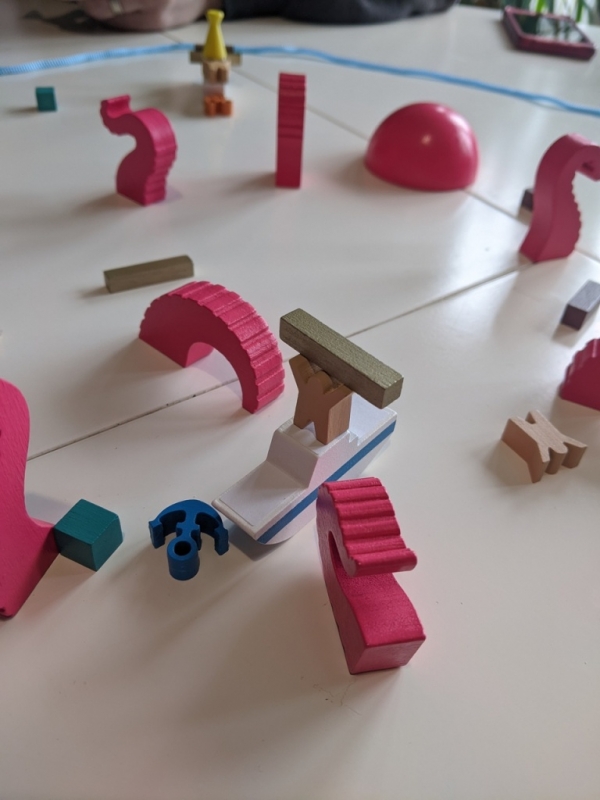 The pieces are just fantastic

Each player has a little flag that is used as their flicking device. This seems minor, but so many of these dexterity games rely on flicking with your finger, naturally giving those with greater manual dexterity, and sometimes smaller fingers, an advantage. Since you are all using a flag on the end of a pole the playing field is levelled more in terms of what each player can achieve with their flick, whilst still allowing for those moments of elation when you pull off the perfect shot.

Two rules then complicate matters just enough to give this game a bit of tactical bite. Firstly you can’t flick treasure you have already loaded on, giving lots of opportunity to be frustrated by other players moves, or do the same in return. Frustration isn’t always a bad thing in games and I enjoy a little friction around the table caused by a snatched opportunity, or clever snookering play. 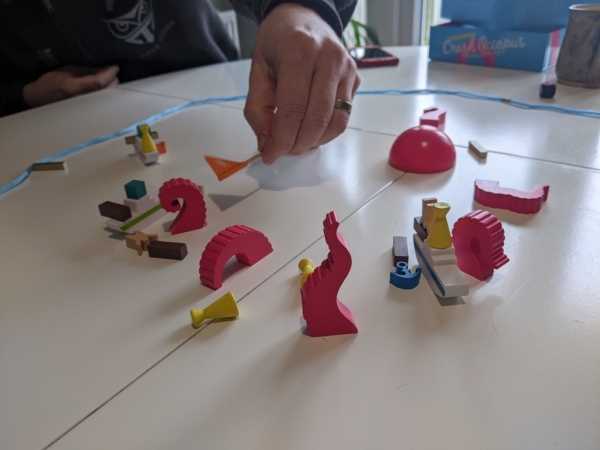 How will this flick change the game?

Secondly you can’t flick the treasure closest to your boat. This can lead to agonising positioning issues and fantastic plays as you try and bounce treasure from far away towards you despite having just what you need bobbing in the water beside you. It also makes navigation have more of a strategy to it as you try and take possession of that last bit of treasure you need to flick your way to victory.

Add in a moving Octopus head and tentacles every now and again and you have a game that has a real sense of pace, beautiful moments of drama, and doesn’t outstay its welcome. The dice that you bounce off the Octopus being only a six sided one does make it almost unplayable though (kidding).

I was going to be writing about Gloomhaven this week. Quite apart from the fact I haven’t started that piece yet, this game grabbed my attention with it’s wonderful pink tentacles. So much so that I went looking to see if I could buy it.

I wrote recently about why I was stopping doing preview of Kickstarter games and one of those was potential availability. Looking around at the moment you can’t get this game for a reasonable price and I can’t find information about a UK release date. During the KS it was 4700 yen, or about £30. The retailers I’ve seen listing it make it more like £40, not that they have any stock.

Price is a factor in a review. Partly this is down to accessibility: can you afford it? Games must be reviewed as a whole, and the price factor matters. If I recommend you game X at £40 is game Y at £30 with similar gameplay, better value for money? If you can’t get it at all, why have I spent time writing this appraisal of it?

You can see why Crash Octopus is £40, it has been lovingly created, has beautiful chunky pieces, and has had a lot of love and thought poured into it. At £30 this would be an unequivocal recommendation from you, at £40 it’s just a bit expensive for what it is as far as I am concerned. I think you can see what this means. If I previewed this during the Kickstarter I would be telling you to go and get it, but as a retail game I would show a note of caution. This is one of the reasons I have come away from doing crowdfunding previews. I can’t be sure that what I am telling you is going to be my absolute final opinion, and I want you to trust me when you read my work.

Crowdfunding isn’t going anywhere, you and I both know that. I do feel that my choice to stop doing previews is sort of vindicated by this example, and no doubt it won’t be the last. I implore those who are taking their game to crowdfunding to at the very least be clear about their retail release plans, and do their very best to let critics know what the final retail price is likely to be. I want to love your game, to show it to other people, to make sales for you if I think the game is great, but I can’t do any of that if I don’t have all the facts to hand.

Virabhadra replied the topic: #333154 19 May 2022 20:14
Did your copy include the Pink Pirate and Treasure Island bits? I bought a scalped Kickstarter copy right after it shipped, then I started seeing that the retail version did not include them and that the "expansion" box with the pink ship and island was selling for the same price as the base game.

thegiantbrain replied the topic: #333208 23 May 2022 02:09
The copy I played was a friends who had just got it off the back of the Kickstarter. It did contain those two expansions but we didn't play with them.
Read More...