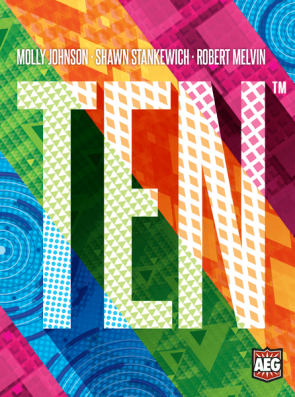 It’s late. Alcohol has been consumed. We’re tired out from a couple of relatively heavy games. But no one seems quite ready to go home yet. “What’s that,” someone pipes up, pointing to the garish abstract box of TEN. I explain that it’s a weird combination of set collection, push your luck and auction. Not complex, but such an odd mish-mash that I doubt my ability to explain the rules at this late hour.

Still, curiosity has been piqued so the garish abstract cards come out of the garish abstract box, along with a mix of black and white plastic counters. Most cards show a number from one to nine and one of four colours. A few, with even more garish abstract art, represent wildcards in one dimension or the other. The final type of card is white with plain black dots on the face, a nice visual change of pace from the riotous wildcards, matching the black counters that serve as cash.

There’s a degree of rigmarole in sorting through this massive stack of cards to remove those irrelevant to our player count and then the game begins. The first player takes the big pile and flips one off the top, a blue three. He chooses to flip again, a green five and with that he declares himself satisfied, collects the revealed cards into his corner of the too-small glass table, and play passes clockwise. The aim is to try and collect cards that make sequential number runs in as many different colours as possible.

What he’s trying to avoid is going bust by having cards on display that add up to more than TEN. Since this is a TENtative start at a first play, the first few turns avoid this entirely, helped from time to time by those black dot cards. Because if you have a mix of number and dot cards, one total is subtracted from the other, giving you more leeway to risk drawing without risking a bust. This is the aspect of the game I thought I’d find hard to explain, and that might make the game unfit for its tagline of “for the whole family”.

In truth, it feels perfectly smooth and natural to keep a running count, adjusting the tally up and down as each card flip is greeted by oohs and aahs of expectation. And it’s the dichotomy of numbers and dots that first catches us out. The first time there’s any initial quantity of the two, the player grabs the colours to add to his stash, confident in the lure of eventual victory. But the flip side is that, when that happens, the rest of us get paid out the quantity of black dots he rejected. He may be point-rich, but we’re cash-rich as a result. As we scoop our windfall of tokens, his expression makes clear his pyrrhic victory.

Soon after we get a reason to splash our newfound cash. If a wildcard comes off the deck, the draw stops and there’s an auction to see who wins it. At first, these are fairly tame but it’s not long before we realise how high stakes these wildcards are. Given that your draw is random it’s very easy to miss links in your runs of numbers and the higher values especially are in short supply. Wildcards are pretty much essential if you want to make any kind of decent score.

Once realised, the bidding becomes far more frantic and tokens get drained out of the pool at an ever-increasing rate. Getting over-enthusiastic I run out completely, and suddenly discover why this is a terrible idea. Now, I can no longer bid to push up prices and it lets the other players fill their boots with wildcards for easy money. It adds a new edge of desperation to each of my card draws, hoping for money to come up. My fellow players, meanwhile, begin to favour coins over colours to keep me starved of income.

And it’s a double whammy because when colour cards are rejected, or when a player goes bust, the cards they missed out on go into a market on the side of the table. After a successful turn where you didn’t bust and took colours over cash, you can buy cards from the market at a price equal to their numeric value. It’s another superb source of filling gaps in your ranks, and as long as I have nothing to spend, it’s closed to me. As my opponents begin to explore it, however, they’re caught between the ease of scooping up market cards and saving cash for surprise auctions when they start.

Eventually, I get some dosh and get back into the game. There are quite a few wrinkles to the formula: details to remember like the criteria to buy from the market, and the cap of TEN money, except for the bonus three coins you get for busting. Nothing that would trip up us experienced gamers but might slow down or put off a family. Once we’re used to the flow we’re free to enjoy the way we all get increasingly desperate for scraps as the pile dwindles, counting cards gone, cards still available and hoping for the best.

We’re also getting increasingly desperate for table space. With four players each trying to maintain four colour runs of cards, plus an ever-expanding market as we all overreach in our quest to draw what we need, this little deck of cards turns into quite the table hog.

All of a sudden the deck is empty. It takes only a moment to tot up our runs and declare a winner. It isn’t me. There’s a bit of grumbling about how it’s very random, albeit quite exciting since luck of the draw is so important. But hey, it was fast and fun so we decide to rack up and play it again.

This time I try to be more careful with my cash but it’s so, so hard as the market fills with tempting prospects and we begin to learn to anticipate what wildcards are yet to come out. Someone else makes my mistake and runs dry, making me the beneficiary of a few lucky auctions, but they get their stash back a bit quicker than I did, leaving me to hope for good draws or the largesse of someone else ditching cards I need into the market.

Speaking of which, now that we understand the game a bit better, turns begin to acquire a very slight vibe of Ra. Each selection consists of stuff you want to keep and stuff you don’t. Sometimes you want the colours but don’t want to gift money to the other players. Sometimes you want the money but you don’t want cards helpful to your opponents going into the market. Choosing what to draw and what to keep becomes a whole lot harder.

Not that hard, though. The game is still just luck of the draw, right? At least we think so until the same player wins the second hand. And the third. Maybe he’s just less tired than the rest of us. Maybe he’s just less drunk. Or maybe he’s very lucky. It’ll take some more games of TEN to tease that out and, right now, that seems quite an appealing prospect. It’s just a shame I’ll have to wait for another late, drunk game night to find out instead of taking it home to the family.

April 04, 2022
Rating
3.0
TEN
A weird mishmash of mechanics that runs smoother than the rules read, it makes good filler for gamers but is a bit left-field for the promised family market.
MT
Matt Thrower #1 Reviewer 286 reviews