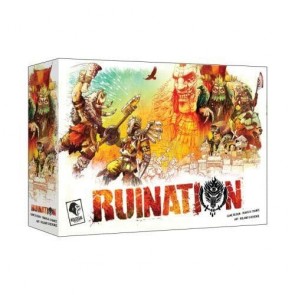 * Early 2022, while staring at my Board Game Collection *

Me: I've finally played every single game in our collection.
My Wife (walking by): What about that one, way in the back, on it's side.
Me: What? What....game is that?
Wife: I don't know. Came last year sometime, looked like a fighty, strategy game. Not my thing and you weren't really writing because, you know, COVID. So, I just stuck it there.
Me (Pulling out a shrink-wrapped, dusty copy of Ruination). Oh....Oh, no. Ummm, want to play a game, baby?

Ruination is an Area control game sent in post-apocalyptic Eurasia. There are some definite nods to Mad Max...sans the automobiles. The wasteland is ruled by the Khan, not to be mistaken for the Ayatollah of Rock and Rolla or Immortan Joe. All players control an upstart clan and battle with the other clans “Fist to fist, eye to eye, The rulers of the wasteland, And in the land of rape and honey you prey” (Ministry “Land of Rape and Honey”). The eastern style artwork and influence certainly has Mad Mao: Silk Road Fury vibes. 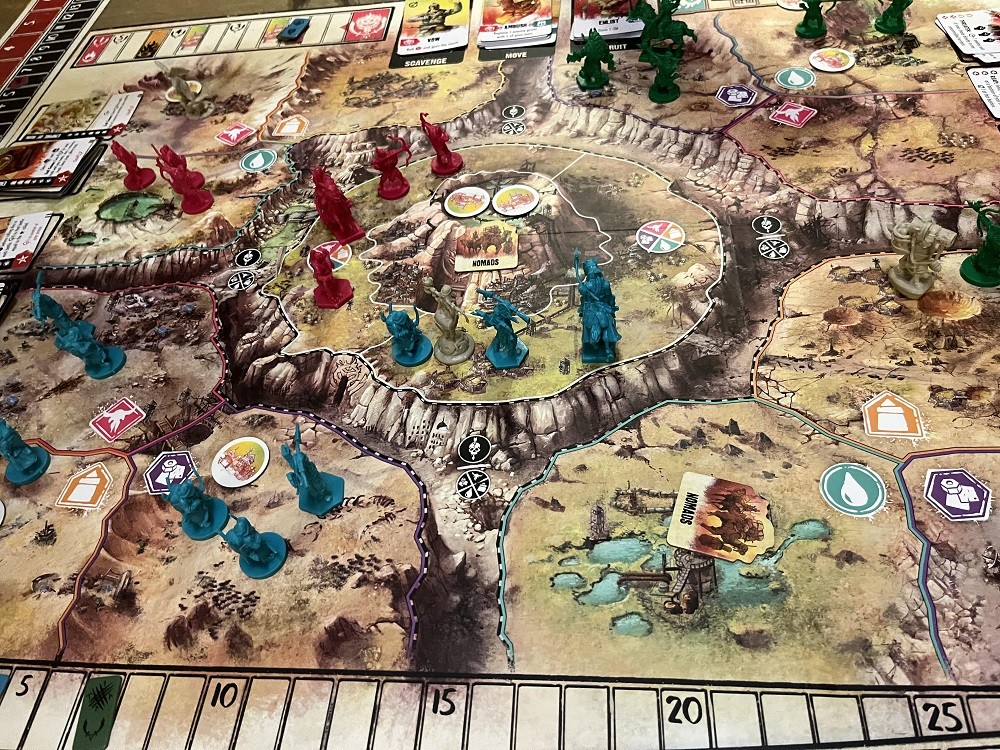 Player turns are “Boom, Bam, Pow” quick. Take a Action (Boom), Resolve any Combat (Bam), Check to see if you are over the allotted Six Units in an area (Pow). Done. And since two of the three Actions you can take (Recruit, Scavenge, or Move) don't instigate combat, most turns are BOOM! Done.

The turns move so quick that when combat does happen, it feels like you are on a drag strip with a speed bump (combat) every ten feet. Just to be clear, Combat does not take that much time, but in context to how fast everything else moves, it is the slowest part of the game.

Playing out Combat is basically setting your overall strength based on what units you have in the battle, setting casualties that will be inflicted, and determining how many combat dice you will be using (up to a maximum of five), Both players roll their dice once and take turns assigning them one at a time to their personal board to impact Strength and Causalities. Players can also spend blessing tokens to re-roll dice. Whoever has the highest Strength at the end of this process wins the battle and units are lost based on how many casualties were inflicted by each side. Remaining troops on the losing side then retreat and victory points are dolled out based on how big the army was that you defeated. As you can probably see, it's not a hugely involved process but, as I said, in the context of how fast everything else moves, it drags on the drag-strip pace of the game. 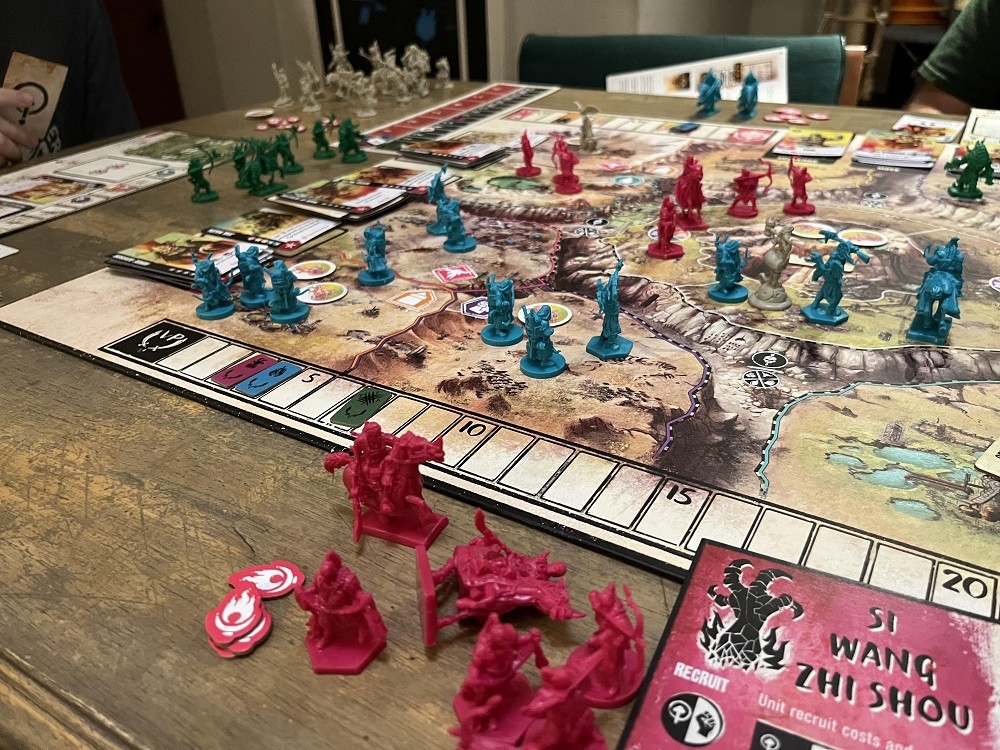 The three actions you can take on a turn (Recruit, Scavenge, or Move) are all done by using the top card of each of three separate decks. Each card has an additional bonus action that the player will take on their turn if they select it. So, player plans should be fluid, with what they want to do this turn balanced with what bonus action would most benefit them. Since you don't know what bonus actions will be available until it actually reaches your turn, it can lead to some “Let me ponder my choices” delay.

The Scavenge Action lets you gather resources which are required to purchase the allegiance of Exiles and to buy Advantage Cards. There are four different types of resources and which ones you will need to purchase the cards will vary according to the icons on the cards. This can lead to some “unsatisfactory” (read: fucking annoying) moments where you will be saving for a specific card only to have it bought by another player and you are “stuck” with a resource or resources that you can't use to purchase any of the other currently available cards.

Exiles are where the shit ton of miniatures come into play. Each clan has it's own sculpt for their Grunt, Brutes and Raiders (but they also had the forethought to put specific bases for each type, so you won't be confused by which is which when looking at other clans.) but EVERY one of the twelve Exile's has it's own unique miniature that you match with the card art when you purchase it. Each Exile also has it's own specific power and advantage, so feel free to debate which ones are overpowered. (Pro Tip: Point across the table at the Exile your opponent bought that you really wanted and state “That Exile is overpowered”). When you do lose a Exile in combat, they are gone forever. So it's (Nux Voice) “I Live. I Die. I'm out of the game!” 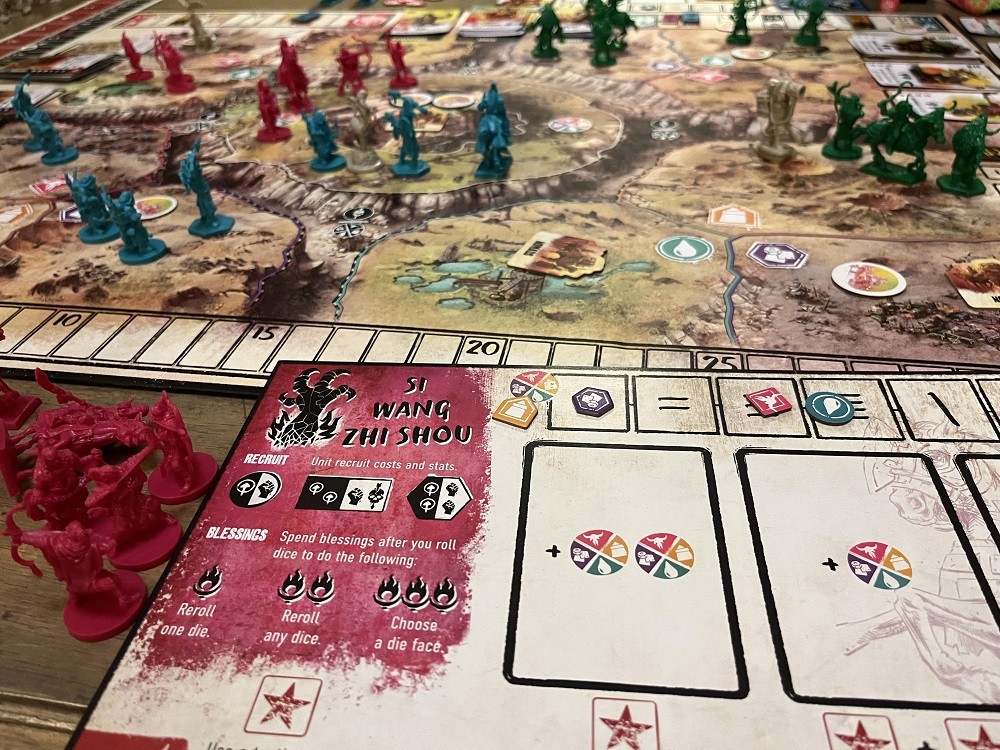 There are interesting choices when it comes to purchasing Advantage Cards. The Level 1 and Level II Advantage cards are to enhance your armies and their abilities or you can opt for the Level III advantage cards that give you a victory point and will hopefully payoff with additional victory points if you have met certain criteria when end game is triggered. Speaking of triggering endgame, there are a virtual plethora of ways for that to happen: Run out of Recruit cards, Run out of Scavenge Cards, Run out of Move Cards, Reach 10 On the Favor Track, Reach 10 on the Glory Track, or a player reaches 30 VP. So, you need to keep your eyes on a variety of places on the board to know that the game could be reaching the finale in short order.

There is plenty of competition in the Area Control/Minis on a map category and, while Ruination is one of the upstart clans, it's doesn't topple the current Khan's of the genre. As one of my player's stated after our first game “With all of these tracks, minis and cards, I thought it would be...more.” Ruination thrives at it's fast pace and, while it stands with the likes of Kemet and Blood Rage, it never comes close to surpassing them. It doesn't have the planned combat engine building of Kemet or the in-depth timing and strategy of something like Inis. Ruination provides Boom, Bam, and Pow in significant doses and the entertainment that comes with that. It may not be the Khan of the Wasteland, but it's shiny, chrome and a true War Boy.

July 03, 2022
Rating
3.5
Ruination
Ruination provides Boom, Bam, and Pow in significant doses and the entertainment that comes with that. It may not be the Khan of the Wasteland, but it's shiny, chrome and a true War Boy.
W
WadeMonnig Top 10 Reviewer 195 reviews

I like this one, more so than you I'd reckon, but it hasn't received much attention at all.

Dan Thurot feels it's a little soulless, which I understand even if I don't agree. There's something about the confluence of mobility, combat, and the upgrade system that really lands well with me. I think the narrow field of action choices also is very interesting.

I'm a weirdo in that I really don't love Kemet. One of the main reasons are the obnoxious upgrade tiles and having to know what they all do pretty much immediately to make informed choices. That's always been a black spot on the game with me.

So in that sense, Ruination fills a void and occupies it's spot of a very fast, in your face area control game with large amounts of combat.

Ruination is probably better than most of its ilk in that it understands its focus and feel better than a lot of games it resembles. It's more focused on delivering a DoaM experience, which is to say the violence is better. There's some good fightin' to be had here. I don't even mind the card system, though I wish it was possible to plan for the turn more than not at all.

What rankled me was the admin. Travis Chance loves tracks. Loves 'em. I'm pretty sure every game of his I've tried has had them. And I just hate constantly making micro adjustments across the board any time I so much as breathe. Is this petty and stupid? Yes, very much so. But my brain immediately processes that as "this should be a video game". I don't have a solution for it. Like the game, don't like tracks. Should play this more and see if that fades.
Read More...