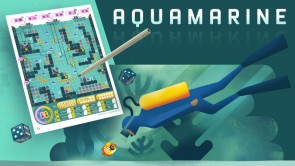 It was a beautiful day. The sea was calm and the sun was shining. The water was crystal clear and even while you were sitting on the side of the boat, in your full diving gear, you could see the corals and wonderful sea creatures in the water. You knew it was going to be a long day and you would probably split it into two or three dives. You did one last check of your gear and then you leant back and dropped into the Aquamarine by Matthew Dunstan and Rory Muldoon from Postmark Games.

There have been a lot of roll-and-write games since the craze erupted that were devoid of theme or setting. Many felt much more like balancing your books or doing your tax return than trawling the oceans for treasure or mining Mars for precious resources. I had long given up on the genre and the various iterations of flip-and-writes, roll-and-draws and the many other weird and wonderful variations on the concept completely passed me by.

That all changed when I got a demo of Aquamarine at UK Games Expo this year. Rory Muldoon, one of the game's designers and the artist on the two-person team who make up Postmark Games, alongside the so very prolific and hard-working Matthew Dunstan, had tweeted that they would demo their latest game at this year's exhibition. I almost ignored the tweet, but thought it was time to give roll-and-write games another go.

After all, I loved Rory's graphic design approach to board game illustrations and really enjoyed playing his game, Skora. Also, Matthew's designs are always interesting and their first game under the Postmark Games label had been hugely successful as well as popular. So I just had to give Aquamarine a go. Visually it was certainly appealing and the setting sounded intriguing.

So your aim is to dive from one of the three ships down into the deep waters below and enjoy the corals, fish and other sea creatures, as well as explore shipwrecks. I'm not going to explain the rules to you here, but let me just say that the game is divided into two halves: day and night. That's important because some creatures will only score you points during the day phase, while others only count at night. So it is important that you try and plan your dives a little bit.

What I really loved about Aquamarine is that every round you dive a bit further into the water. You don't necessarily have to keep going down. You can stay near the surface, but of course, there are more points to gain the deeper you go. Every turn you mark your path through the water, based on the dice results, by enclosing a rectangular shape. Every new shape continues from the previous one. So you can really see your progress through the sea. 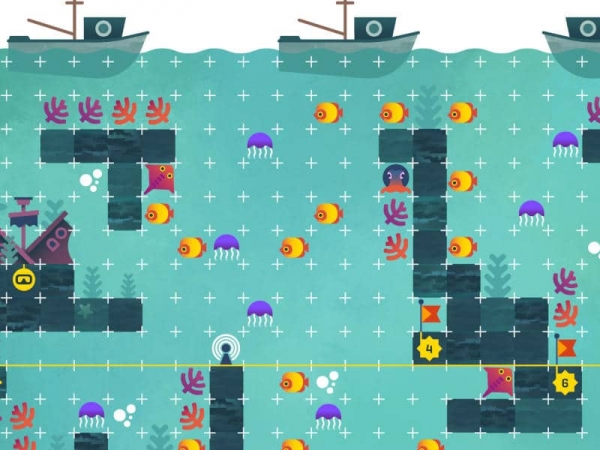 You're not allowed to go across your own path, even though there is technically nothing stopping you from diving down and going back to the surface. However, here is another reason why you want to try and plan ahead at least a little.

When you get to a certain depth, you also start to use up your oxygen, which is another thing you have to keep an eye on. However, unlike in another popular deepsea diving game, you don't die when you run out of oxygen. You just start your next turn diving from one of the other two boats with a fresh tank of air.

Dive Right Into the Aquamarine

So, yes, you do tick things off and do a bit of housekeeping, but it's very limited. The setting is really immersive. As you look at your player sheet, you think about where to go next. There are fish to see, coral to find and shipwrecks to explore. You start to imagine yourself in your wetsuit with your oxygen tank on your back. You want to enjoy your dive and see the wonders of the ocean.

There is no time pressure as such and depending on how you want to play the game, you can try and go as deep as possible, as quickly as possible, or you can just meander along the shallow water and take in the sights. If you run out of air, you just start again at the surface, which also gives you potential bonus points by the way. It all feels rather calming and chilled.

I've played Aquamarine with a number of different people now and everyone seems to be getting something different from it. At the same time, everyone is drawn in by the beautiful artwork. Everyone I played with so far would comment on what they were currently discovering on their turn, be it a shoal of fish, a majestic ray or a spooky shipwreck. It was clear that everyone was really engrossed in the setting. 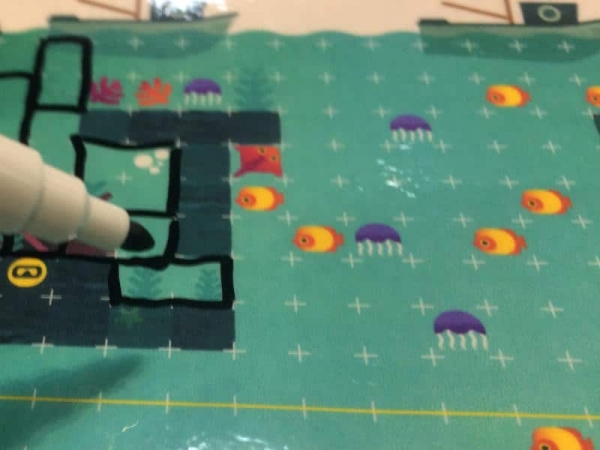 Drawing your dive path in Aquamarine

A Game for Everyone

You can easily play the game by yourself, trying to beat your own score - or you can play it with many, many people at the same time. There is no player interaction. Everyone can play along on their own. The only thing you share is the results of two six-sided dice. Every player chooses one of the two numbers and draws their rectangle. So there is no reason why you couldn't play Aquamarine with 100 people at once, at least in theory.

It's a game that is really easy to explain and doesn't take long to play. In fact, it's probably best if you teach it as you play, but either way, there isn't a huge amount to learn. It's pretty much all there in front of you, on your player sheet anyway. It's also a game that people of a wide range of ages can play.

Aquamarine is the first roll-and-write game I've played after a long break and it really hits all the right spots for me. I felt really immersed in my dive and the challenge of trying to use the number of one of the rolled dice efficiently is just enough to give you a really interesting puzzle. Due to the randomness, every game you play will be different. So it should keep you busy for some time.

If you've given up on the roll-and-write genre, like I did, then I suggest you give Aquamarine a punt. I really don't think you'll be disappointed. The gorgeous artwork and the simple, but clever mechanisms make for an immersive and interesting game experience. Matthew and Rory have done an amazing job! So jump in at the deep end and give Aquamarine a go.

July 15, 2022
Rating
3.5
Aquamarine
If you've given up on the roll-and-write genre, like I did, then I suggest you give Aquamarine a punt. I really don't think you'll be disappointed.
O
oliverkinne Top 50 Reviewer 47 reviews