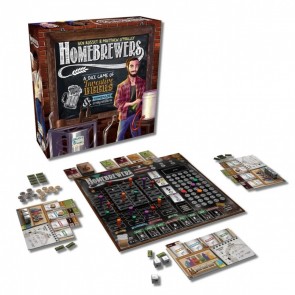 Trends come and go in all aspects of culture. From parachute pants, to aviators, fashion is the most visual example of the changing tides of the cultural landscape. Our eating and drinking habits also wax and wane with the cultural tides, as diet fads come and go and the latest ‘must visit’ restaurant pops up in your town. One of the most recent of these trends has been the rise of the craft brewery scene.

Trends come and go in all aspects of culture. From parachute pants, to aviators, fashion is the most visual example of the changing tides of the cultural landscape. Our eating and drinking habits also wax and wane with the cultural tides, as diet fads come and go and the latest ‘must visit’ restaurant pops up in your town. One of the most recent of these trends has been the rise of the craft brewery scene.

Even if you are not a beer drinker it cannot have escaped your attention that there has been an explosion in small, or micro, breweries, pubs with their own particular brand of ale, and a deeper and wider variety of beverages on the shelf of every supermarket.

As tabletop games have grown over the last couple of decade, we have seen them reflect more strongly the themes and trends of wider culture. That’s not to say that there aren’t a smorgasbord of sci-fi and fantasy games out there. I am overjoyed however that we are seeing boardgame themes extend out the way and look to the world around them for inspiration. We’ve seen a few games based on brewing and the one that has landed in my critical glass is Homebrewers. It is published by Greater than Games, designed by Ben Rossett & Matthew O’Malley, with art & design from SaRae Henderson, and character art by Adam Rebottaro.

It’s competition time in the world of Homebrewers. As a member of the local brewing club you are competing over 8 months to brew the best beer you can. You’ll present your beers first at Summerfest, half way through the game, then finally at October Fest where only the beeriest beer will win the day.

Yes it’s a straight up point, reputation in the parlance of the game, fest to determine the winner. The game could be presented in a dry way but the designers of Homebrewers know how to quench your thirst for something with a little more bite. Dice.

Each month you’ll roll 3 dice and then use the actions shown on their face to make your brew engine go. You will gather ingredients, clear up the workshop, brew some beer, and participate in events.

The core of course is about getting your brew on and climbing the tracks of the 4 types of beer the game has you making: Ale, Porter, Stout, and IPA. You assemble the beers from a deck of flavour cards. These cards are my favourite part of the game as they are multi-use. I love me a bit of multi-use cards in a game.

If the dice roll in your flavour you can grab some new cards from the market, start to build up your beer’s flavour profile, or just play one of these cards for a one-time effect. You will build your beers by tucking these flavour cards under one of the beer types on your board, giving that beer a new ability everytime you brew it. More importantly though, it gives you an idea of what that beer is going to taste like. 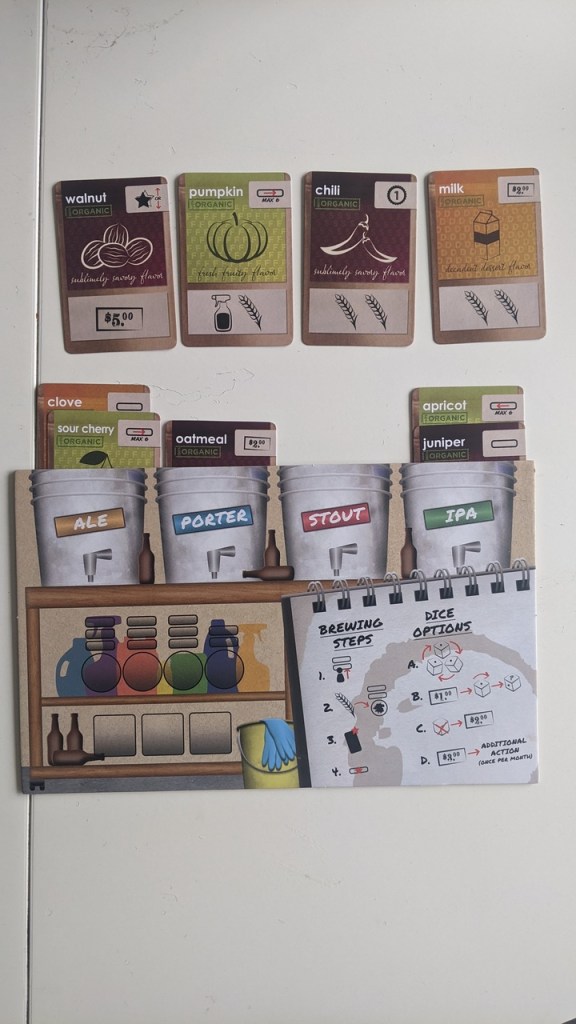 Not sure these are the best sounding beers

With games of this nature I find the themes can feel like a thin veneer of the mechanical bones. With Homebrewers there is a real sense of the beer you are making, be it a finely rounded masterpiece or a horrible mess that no one can stomach. Of course you’ll build for the abilities, but that means having to settle for some truly hilarious flavour combinations. A little story emerges about the evolution of each beer and I really like to see that emergent narrative.

Of course in the end it is all about your reputation, points, in the world of craft brewing. You can get that from brewing beers with the right flavour cards. As you climb the quality tracks for each type of beer you gain the benefits of doing so at various steps along the way. When Summerfest and Oktoberfest come around you gain more from getting awards for your progress or for fulfilling the tastes of the judges. It’s a bit of a point salad for sure but one that is very easy to parse and doesn’t overwhelm .

There are other bits of the equation to manage. You need money to manipulate dice, it isn’t all down to luck. You need to clean your station up so you can brew more efficiently, and you need to get ingredients in order to be able to brew your beer in the first place. Those things are there to provide a foundation of choices on which the core of brewing beer is built. That core is an extremely solid dice manipulation and engine building game.

There are some extras in the game that feel a bit like they were put in just because people expect them. A trading mechanic after you roll the dice I don’t think I’ve ever seen used because it is easy to manipulate the dice. You can play with variable player powers but they feel unnecessary and just an addition to the game to appease the gods of replayability.

For me replayability comes down to one question. Do I want to play this game again? Yes I do. It’s not going into the collection, and I wouldn’t choose it above some of my favourites, but if someone else wanted to play it I would be happy to. Homebrewers is a solid game with a strong theme that the mechanisms support, plays quick, and has a dose of humour and narrative along the way. I like a game that knows what it is and isn’t afraid to just be that. It gives you the choice on whether to get another round in or not.

I was sent Homebrewers by Greater Than Games. I have played the game in real life and on Tabletop Simulator.