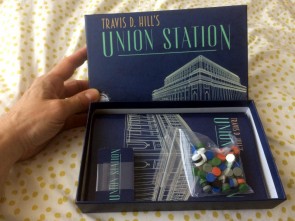 It was a glorious time of progress, industry and opportunity. The turn of the 20th century promised so much and if you were flush with cash, there were plenty of opportunities to invest and reap huge rewards. That was especially true for the railroad industry in the United States. In one place alone, there were five companies working together to build the greatest station in the world. They all bought stock in one of the potentially most lucrative companies in Chicago. Their hopes and dreams all began at Union Station by Travis D. Hill from New Mill Industries.

The Journey So Far

I'm slowly trying to steer my games group towards 18xx games, via a circuitous route of all manner of train games. From the quick and easy-to-learn pick-up-and-deliver game Small Railroad Empires, to the slightly longer and more involved cube rail game Luzon Rails, and now to another cube rail game, Union Station. The journey is nearly at its end and the first 18xx game is on the horizon. Hopefully, it won't be the group's terminus, but merely a change to another line that will take us around the world.

So far, the journey has been good. Both, Small Railroad Empires and Luzon Rails have been received by the group really well. In theory, Union Station should be just as well received as Luzon Rails. They are both relatively similar games, but where Luzon Rails is more of an introduction to cube rail games to people who haven't played them before, Union Station is slightly more advanced. I'm glad I introduced these two games to my friends in this order, rather than the other way around.

Anyway, I don't want to compare different train games to each other, or to Union Station for that matter. Instead, I want to look at this game in its own right and see how well it stays on track.

The game comes in a relatively small box. It is clear that the publisher set out to create a game that you can easily carry with you and play virtually anywhere. Mind you, the box is a lot larger than the components. There is a fair bit of air. That's all due to the size of the game board, as is so often the case. The board is folded twice, which makes it pretty small, but it still takes up quite a bit of space.

There is a deck of cards and lots of wooden discs. These on their own could easily fit into a standard deck box, making them really easy to put in your coat pocket. So if the board was either made from cloth or neoprene or maybe folded once more, but in the other direction, you could have fit everything into an even smaller box. Come to think of it, I dimly recall that the publisher was hoping to fit everything into a smaller box. 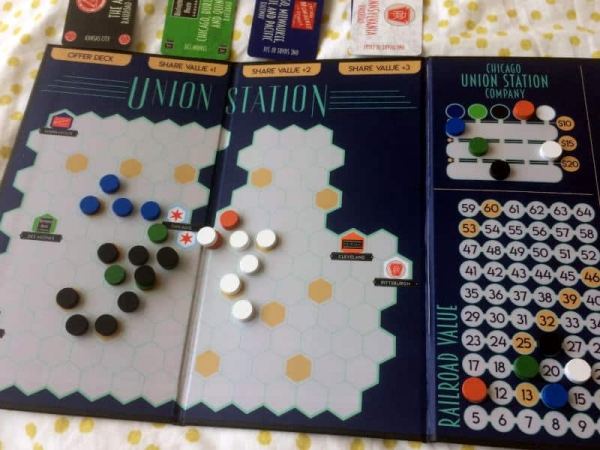 Anyway, even as it is, the box isn't huge. You'll have to put it into your backpack or handbag, rather than your coat pocket, but that's not much of an issue.

What's really neat about Union Station is that it plays pretty quickly. That's another plus for a game you want to take with you. If you're out and about somewhere, you don't really want to spend more than an hour on a game. However, as long as it's not too windy and there is no rain, you can easily play this game on a picnic table or in the pub.

That's already a huge plus for me and one of the reasons why I decided to buy the game in the first place.

If you have played cube rail games before, then it won't take long to learn Union Station. However, even if you've never played a cube rail game in your life, it's not too hard to learn. I would say you pretty much start playing and learn as you go. Chances are, you won't really know what your strategy should be in your first game, but that's true for most learning games. As the rounds progress though, things will start to click and you will soon realize what you need to do.

Also, because the game plays relatively quickly, you can probably complete your training game and then play another in earnest.

Like in most cube rail games, there are shares and at the end of the game, you cash in all of your shares at the current stock market price and whoever has the most cash then wins the game. The focus in Union Station is very much on the shares and not quite so much on laying track. Of course, you want to lay track to increase the value of your shares, but you also increase the stock price simply by buying shares. At the same time, selling shares will really tank a stock's price. So, yes, buying and selling shares are pretty much the biggest part of the game, which isn't a bad thing.

So the game is pretty straightforward. As with most games, everything starts quite slowly, but it doesn't take long and everything really ramps up. I played a number of games where halfway through I was way behind everyone else. I didn't have many shares, but a fair amount of cash. That alone wasn't going to be enough to allow me to win though. I thought I was done for. 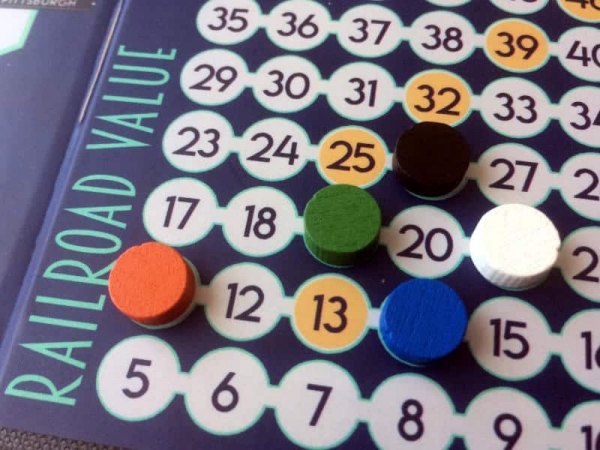 Then my fortunes changed dramatically when I started to convert my cash into shares and benefit from the hard work other players had put into increasing the value of their stock. The key moment came when I sold shares in a company that had a huge stock value. Not only did I cash in and reap huge rewards, but it also meant that another player's huge lead immediately became an even bigger loss.

I'm really impressed with how much action Union Station packs into a relatively short amount of time. You go from one extreme to the other in 45 minutes or so. Every turn things change and when the game comes back round to you, you need to look at the current situation and make decisions based on how things are now, rather than how they were on your turn.

That makes the game much more tactical rather than strategic. It also means that sometimes players can take their time to make a decision. That's especially true towards the end when everyone tries to work out what action gives them the biggest benefit. Even so, the game is over in about an hour or less. It certainly doesn't outstay its welcome. In fact, you usually want to play it again right after you finished.

I do have a few niggles with Union Station though. There is a huge amount of housekeeping to be done, at least in the first part of the game. You constantly move shares along to update how they affect a share's value when they're bought. You also have to remember to move the dividend tracker and the five company dividend markers. It's only when all shares are at the far end of the offer row and all five companies have moved to the bottom dividend slot that things settle down. Before then, it's really easy to forget what to do. 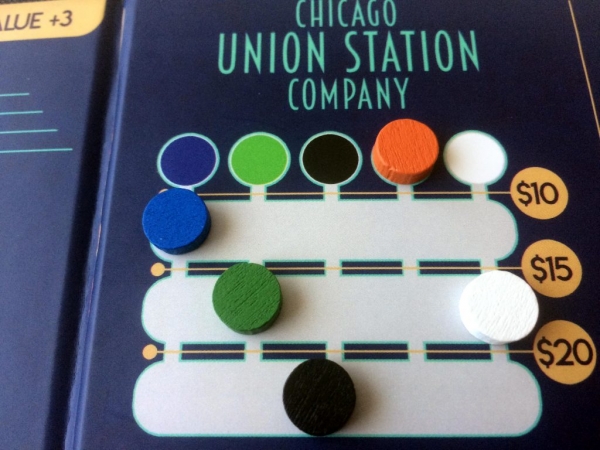 The other niggle is that the rulebook wasn't completely clear to me. It all made sense when I started playing the game for the very first time. It's nothing major and you will soon work it out. The player aid cards also have quite thin white text on a dark blue background, which makes them a little difficult to read. I think that's not by design and I reckon the printing quality just wasn't as good as it needed to be to make the text easily legible. Again, it's not a major thing, because everything that's on the player aids is also explained in the rulebook.

The last comment I want to make is about how you track your cash. Instead of having wooden money tokens, everyone gets two cards and two grey discs that track 10s and units of money. The problem with that is that it's easy to nudge them and suddenly you're really rich - or really poor. I recommend you use poker chips, if you have room for them, or maybe metal coins instead. I now always use the wonderful Roxley Iron Clays whenever I play a train game.

Despite my niggles though, I really love Union Station. The game comes in a pretty small box, is relatively easy to teach and pretty quick to play. It doesn't occupy much room on the table and it packs a huge punch into a short amount of time. It feels like a really balanced game and every time you play will be different. The randomness of the share deck will challenge you every time. Best laid plans won't work out, if you can't buy the shares you need. If you can adapt to the changes, you'll do well. You can go from rags to riches in a matter of 15 minutes and take victory at the last moment. It's all really tense until the end.

So, if you want a fast-paced, high-intensity, super exciting, tactical cube rail game that you can (almost) put into your jacket pocket, then Union Station is definitely for you.