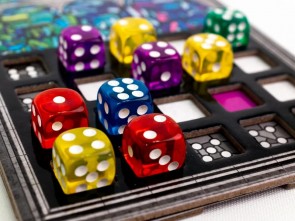 As an artist, I knew this was going to be a challenging project. Making stained glass window masterpieces required clever and careful planning and meticulous execution. The prospect of having one of your pieces be seen by people around the world was a daunting prospect, but working for such a prestigious family made up for it. I was honoured to be employed by the famous family of Sagrada by Adrian Adamescu and Daryl Andrews from Floodgate Games.

The game impresses even before setup, because the box itself is so very vibrant and really stands out on the shelf. The artwork by Peter Wocken perfectly captures the feeling of high-quality stained glass windows and carries through to the player boards, round tracker and score markers. The 90 translucent dice in five different colours and the 24 glass favour tokens are also absolutely gorgeous, giving Sagrada an absolutely stunning table presence.

It's also a very tactile game. The dice may be a little small and light, but it still feels nice to pick them out of the cloth bag, roll them and place them onto your player board. The glass favour tokens are probably the most satisfying components though. They are quite chunky and it's a joy playing with them.

I think what makes Sagrada so enjoyable is the mix between luck and solving the puzzle that your player board poses.

So there is the luck of which colour dice you draw and the pip values they have after rolling them. It creates the perfect amount of uncertainty that forces you to adapt your plan and try to make the best of what you're given. At the same time, it's not so much luck that your turn is completely spoilt - except maybe towards the end of the game, when only specific colour and number combinations will fit.

You can also mitigate some of your luck, or rather your bad luck, by using the so-called "tool cards". They allow you to change the pips on dice or re-arrange the already placed dice on your player board. That way you can usually still make a terrible colour and pip value combination work for you. So it's not completely hopeless.

You're then faced with the requirements that your player board presents. You can't just place dice wherever you want, so you have to spend a little time working out your options and thinking a couple of rounds ahead to help you change tactics if the next roll doesn't go your way. 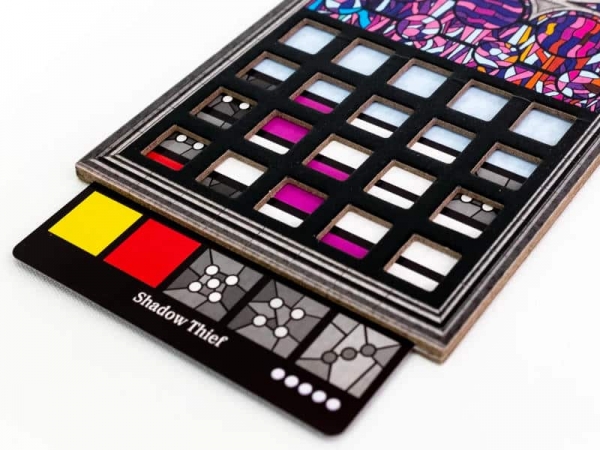 Sagrada's player board with insert (photo courtesy of Floodgate Games)

Sagrada is the sort of game that starts really simple and you wonder what the fuss is all about, until the level of difficulty really ramps up about two-thirds through the game. Suddenly, you have to compare your options carefully to decide which one is not going to paint you into a corner. Sometimes things are very clear and you have an overall picture in your head, but other times you basically have to choose the best of several terrible options.

Sagrada is also the sort of game that you can play in one of two ways: friendly or fiercely. In friendly mode, everyone just worries about their own player board and chooses dice accordingly. In fierce mode, everyone keeps an eye on what everyone else is doing and takes the dice that other players most desperately need. The game itself doesn't offer these two modes in the rules or anything, but it'll be down to the people you play with to decide what they want to do.

Sagrada certainly appeals to both: happy family players as well as fiercely competitive hate drafters. Whether you play to create a lovely looking window or to win at all costs is really down to you. I have played it both ways and enjoyed both. My family loves playing Sagrada because we are pretty friendly and don't actively take dice that other players need. Yet, when I play with more competitive players I know that they will take the dice I need, if they have the choice.

I know that Sagrada is often compared to Azul. I would agree that you will probably like one if you like the other, at least generally speaking. However, they are very different games. Both have the element of hate drafting and in both, you're playing with colourful components and trying to arrange them in specific ways. That's probably where the similarities end though.

So just because you have a copy of Sagrada doesn't mean you don't need to buy Azul or vice versa. Both games scratch a slightly different itch and I would say you can easily justify having both.

From a table presence perspective, Sagrada wins by miles over Azul. It just looks so stunning on the table and you will love the stained glass window that you will have created by the end of the game. It's so much more colourful and vibrant. The translucent dice aren't as chunky as the tiles in Azul, but they look a lot better. You almost think that they should be edible and you might be tempted to sniff them to see if the yellow dice smell of lemon and the purple ones of black currant. 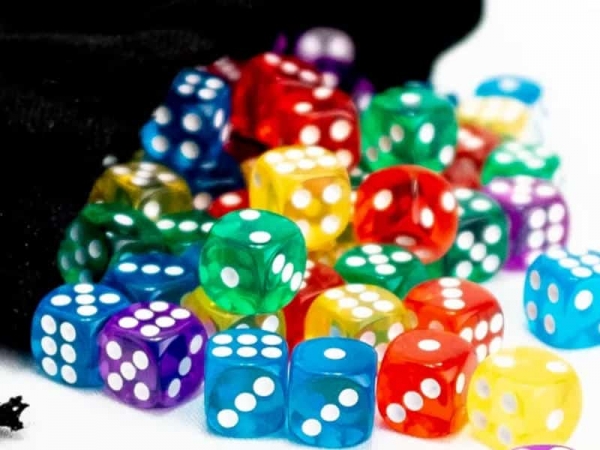 I know that Sagrada will stay in my collection. It's a game you can play just as well with two people as you can with four. It doesn't take too long to explain and you probably just want to start playing and learn as you go. It's very tactile and visually pleasing, so it's going to attract new players quite easily. It gives your brain a bit of a workout without being too demanding. It also plays pretty quickly. It's all just right and a stunning game to look at. So, if this sounds like a game you might like, then I recommend you give it a go and make your own stained glass window.