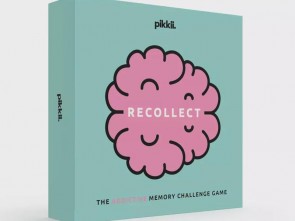 I wasn't sure what it was. It was certainly yellow. Maybe it was a banana. Or it was a pencil. Actually, it could have even been a lemon. I just couldn't remember. There were just too many cards on the table. I wish I could Recollect from Pikkii.

A very simple intro for a pretty simple game. Well, saying that, it's not actually that simple. It starts out really straightforward with a handful of brain-shaped cards. The cards have one of six different background colours and show one of, I don't know, maybe a few dozen items, that are drawn in a very stylized, iconographic sort of way. They're mostly really easy to recognize and tend to stick in your brain quite quickly. The problem is, you can only look at them for a few seconds before they all get flipped face-down.

On your turn, you choose one of those face-down brain-shaped cards and ask either the player to your left or right to tell you what item is on that card. Once they've said what they think is on the card, it gets flipped face-up and if they're right, they get a point, represented by a small circular token with a cartoon-style brain cell on it. If they get it wrong, they get nothing.

Then it's their turn to add one more brain-shaped item card at the end of the line. It gets placed face-up for a few seconds for everyone to have a chance to memorize it, before it also gets flipped over, so that the item is no longer visible. Then that player gets to choose a card and again ask the player on their left or right to guess the item. So it keeps going round and round.

If you're confident, you can wager one of your brain cells to not only guess the item, but also the card's background colour. If you get it right, you get double the points, but if you get it wrong, you lose your brain cell point. 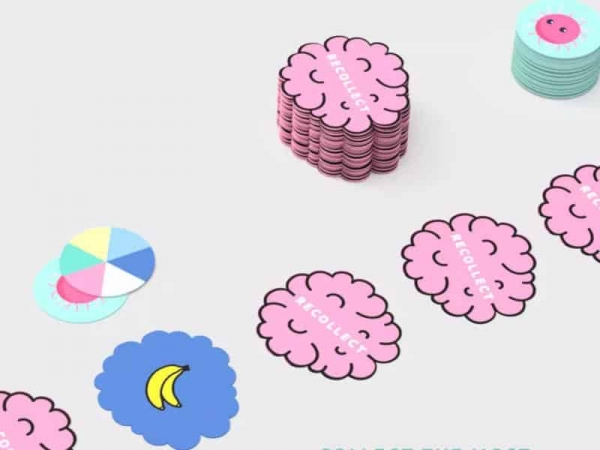 As I mentioned, it all is relatively easy to start with. Memorizing half a dozen or so items isn't difficult. You might even be brave and wager a point on getting the background colour right. It's all quite fun until the row of item cards gets longer and longer. Suddenly, it becomes almost impossible to remember whether the lemon was the third card along or the fourth. Maybe it was the bathtub that was added last round and therefore is the second to last card, but then again, it might have been the umbrella. You really need to take a little time to think about it and focus on what item is on the card you've been told to guess.

The game ends after exactly 10 minutes. There is a little sand timer in the box that you turn over when the game starts. You have to collectively keep an eye on it to make sure you know when it's all over. Of course, if you miss the timer running out, it's not the end of the world.

Like with many realtime games, if you currently have the most points, you might intentionally take longer to think about what item is on the card or to choose a card for the next player to remember. As a group, you have to try and have your own house rules, if you want to play Recollect really competitively. However, I think the game is much more about fun and about training your brain than it is about getting the most points. 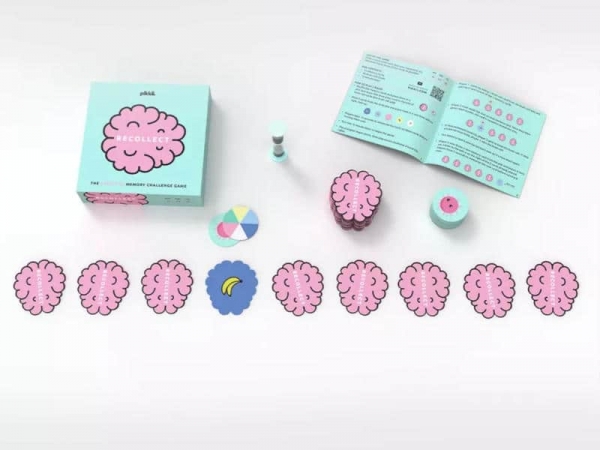 I'm not a great fan of games with a memory element. So I wasn't too keen on trying Recollect at first, but as you start to play, it's actually a lot of fun. You just have to play it in the way it's meant to be played: basically, don't take it too seriously. If you approach it to have a bit of fun and test your memory, then it's really great. However, even if you still don't like it, it's going to be over after 10 minutes. So it's really quick.

Recollect is the perfect game for a family, of course. In fact, younger players are likely to win, because their memory is usually better than that of an adult. I played it with my wife, our neighbours and their young child and it was a lot of fun. I think you can guess who won. A little hint: it wasn't me.

Recollect is a memory game with a couple of extra bits that create some interest for older players. It's not the usual memory game where you have to match two tiles. The fact that you add more and more cards to the line, makes the game much more challenging as it plays out.

So, if you want a light memory game that's a bit different and great for the whole family, then you can't go wrong with Recollect.

August 19, 2022
Rating
3.0
Pikkii
If you want a light memory game that's a bit different and great for the whole family, then you can't go wrong with Recollect.
O
oliverkinne Top 50 Reviewer 47 reviews