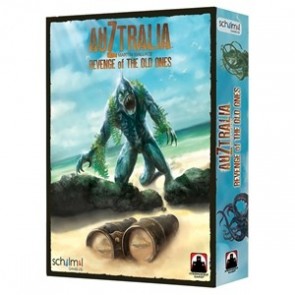 Revenge of the Old Ones, one of the new expansions for AuZtralia, brings the whole Lovecraftian canon to bear against the humans. Byakhee, Azathoth, Dark Young, Deep Ones, Hastur, Star Spawn and any number of other unpronounceable horrors have been added and had me “Adding to Dictionary” when I sat down to write a review about it.

If you can count on anything when it comes to a co-operative game, it will face complaints that is is a.) too hard or b.) too easy (usually in equal doses). If you fall into the camp of those who think AuZtralia was too easy, try taking it on with another player controlling the Great Old Ones. Acting as a brain cylinder, a fifth player can be added to the mix, expanding the player count from the default one to four players. Of course, you can also simply add the brain-in-a-jar player at any other player count but I prefer the one versus many, many other players. If you and your group are veterans of the base game, be prepared for a dramatic leaning into the co-operative elements of the game if you wish to survive and thrive. Where the “AI” in the base game attacks the closest player, a human-controlled Great Old One can focus on a weaker or more isolated player. With a single player losing a port triggering the end of the game, it's vitally important that the humans work together to protect everyone. So, those dirty little habits you learned to eek out a few extra victory points in the base game can come back to bite you in the ass if Cthulhu takes a mouthful of your neighbor and ends the game. Oh, did I forget to mention that instead of waiting to be awakened, the Old One player starts scheming and moving from the first round? You can forget about that head start you have grown accustomed to. 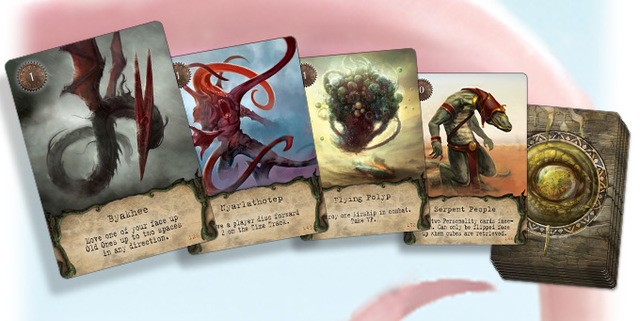 But the new challenge level isn't restricted to just having another player control the Old Ones. You can add the “Enpowered Variant.” This uses the Solo Mythos cards (provided for the solo version of the game) in the normal multi-player game. It adds a bit of fiddliness (of course it does) when determining which player is impacted by the cards but the challenge is definitely boosted. It doesn't benefit from fighting smarter (as a human controlled Old One does) but it does fight harder and dirtier. Yea, it is kind of the “Deck of Many Bad Things” that I dislike in most cooperative games. But the bad things that happen to the players make “sense.” When the Great Race of Yith appears, it moves the Old Ones disc two spaces backwards on the Time Track, as if they had projected their minds across time and space. Flying Polyp's will destroy a player's Airship. And Dholes will devour entire sections of rail lines. I just wish there were more cards. After a few games, you know what the thirty cards are and that they are all going to come out. So, you find yourself bracing for specific ones instead of reacting and trying to overcome what comes out. It might be a fine distinction but the IF this card comes out not WHEN this card comes out would give the game more tension and variety. 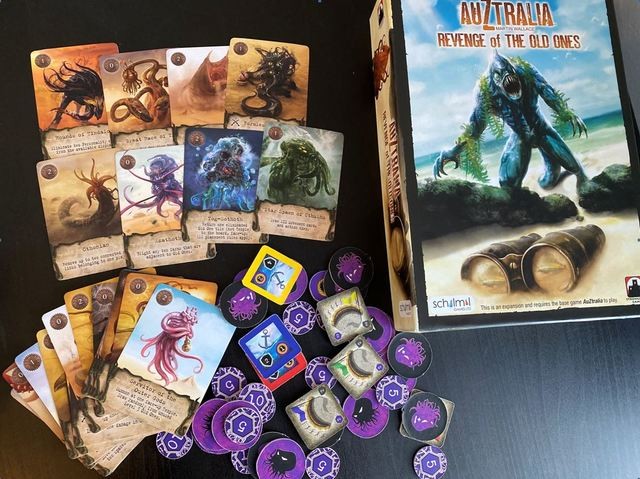 Don't worry, the humans are not defenseless against the new wave of horrors, they have their own additions to the war. So, if you fall into the camp of finding AuZtralia too hard, the starting ports have been upgraded, now having their own tile with a starting defense of four. If a port is damaged in an attack, taking more than two damage, it is reduced to a defense of two for the rest of the game. They have also added Outposts, where the humans dig in to fight. If it will end up being your Edinburgh Castle or your Alamo remains to be seen. Hell, nothing is stopping you from adding both Ports and Outposts to the base game without putting in the added challenge of the Old Ones if you want a bit more of an edge as the humans. 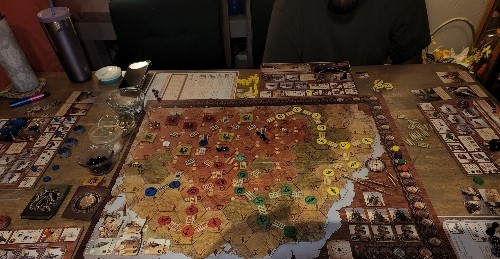 AuZtralia is one of the rare co-ops (well, competitive co-op) that still sings it's siren song to me years after it's initial release. Revenge of the Old Ones adds the bass of the Deep Ones to that dirge and only makes the pull stronger. This remarkably affordable expansion delivers on added challenges, additional depth, allowing a player to step in as the Old Ones and providing a new solo mode. 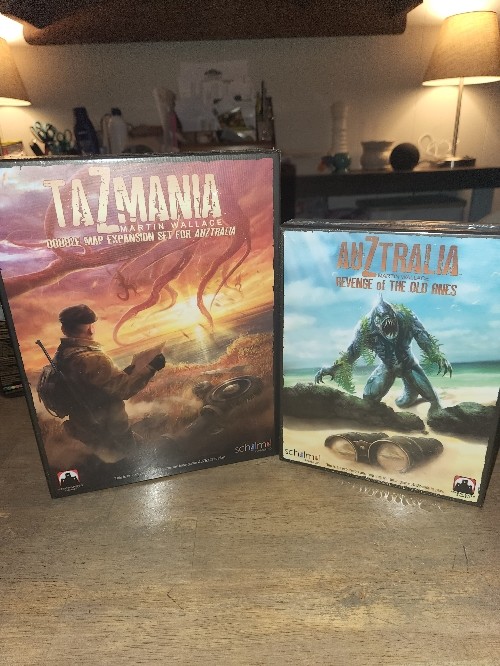 August 21, 2022
Rating
4.0
AuZtralia - Revenge of the Great Old Ones
AuZtralia is one of the rare co-ops (well, competitive co-op) that still sings it's siren song to me years after it's initial release. Revenge of the Old Ones adds the bass of the Deep Ones to that dirge and only makes the pull stronger. This remarkably affordable expansion delivers on added challenges, additional depth, allowing a player to step in as the Old Ones and providing a new solo mode.
W
WadeMonnig Top 10 Reviewer 195 reviews