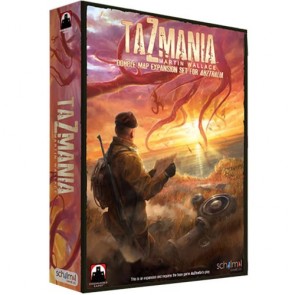 World at War: A Newsreel Update: Newsflash: The brave boys and men of the democracies of the world that have united in our efforts to destroy the alien invaders have a new beachhead: TaZmania. Using the industrial strength of humanities best and brightest, we will conquer this untamed land. Next stop: The retaking of AuZtralia from the unmentionable horrors.

What I received in the TaZmania expansion was a bit different that what I was expecting.If you aren't acquainted with the base game, when you set up either side of the two-sided board, you are required to do a “Survey” which means you place tiles on various locations and this determines where both resources and great old ones are placed. What I was expecting with TaZmania was that the main (Fixed) side of the TaZmania board would come “pre-surveyed” with locations showing where resources and baddies would be placed (in order to accelerate set-up). Nope, you still do the survey. The back of the box description reads “One side has a fixed map that is surveyed for resources and Old Ones, while the other side is randomized through a set of 66 terrain tiles.” So, I think you can see where my confusion came from. 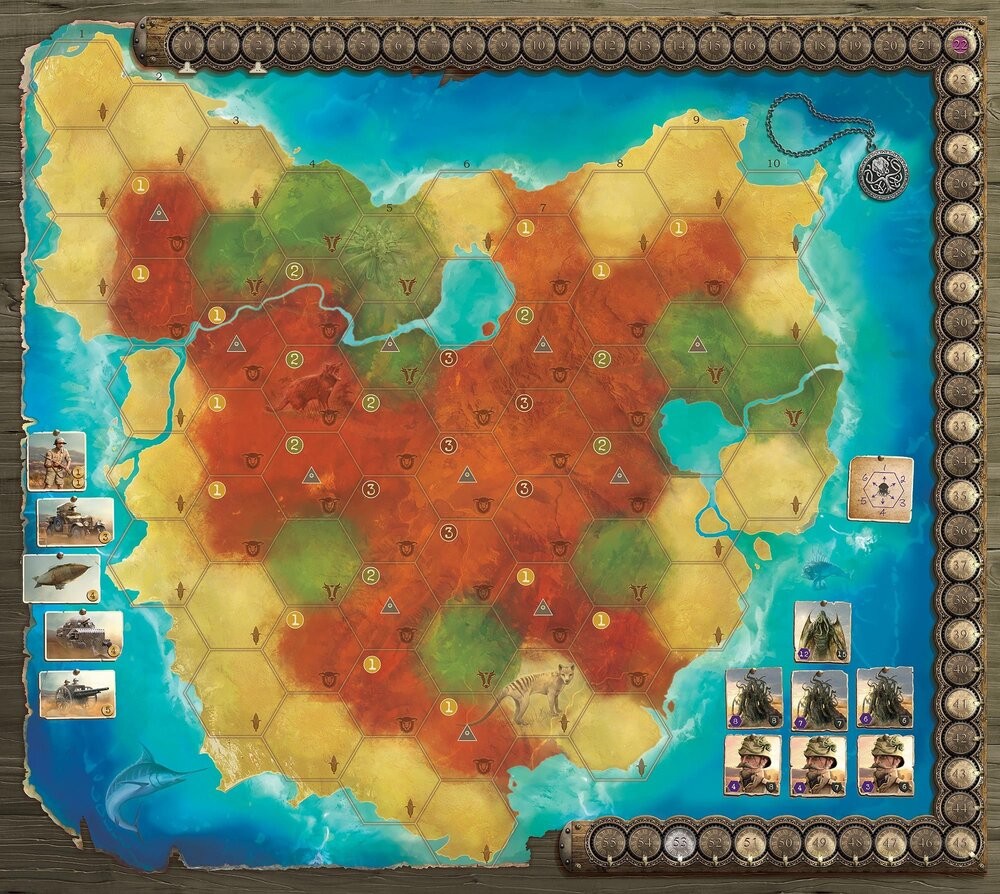 Like the original, the fixed side area types are pre-determined but everything else is placed via the survey. On the flip side of the TaZmania Board (the Tiled map), NONE of the locations have any markers, so you fill the entire map with the tile hexagons. This means that any type of terrain can appear anywhere. It's not a accurate representation of Tazmania but, then again, neither is a island creeping with crawling chaos. I like this side because you are not required to do a survey after the set-up and the middle of the board is unexplored and only filled in when you reach it, giving a great “fog of war” feel. (Normally, the Old Ones aren't specifically revealed but you do know what level they are, what resources are present and the type of terrain: now it's all a mystery). On the downside, you are still looking at about twenty minutes of set-up (if you go at it alone) while you place sixty-one of the sixty-six included terrain tiles and all the associated resources and Old Ones. 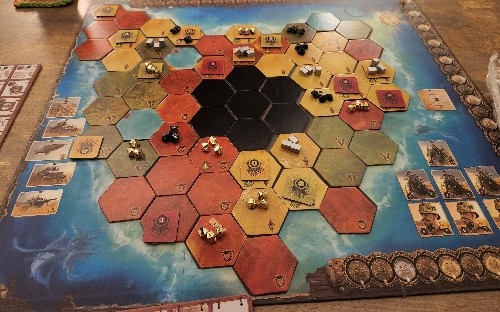 TaZmania supports one or two players (Unless playing with the Revenge of the Old Ones expansion, which means that a third player can play as Cthulhu and company). It's an oddly specific expansion in terms of player count. The default AuZtralia map is a bit large when playing solo or with only two players, so this provides a more focused experience. Combining the tiled map with this “Fog of War” can cause you to stumble into some precarious experiences, like revealing a level three Old One that you didn't know was there, finding out it is Cthulhu and having him shamble down to your port with a couple of (un)fortunate movement draws...all in a single turn. This is the way the world (game) ends, not with a bang but a wet squishing sound. 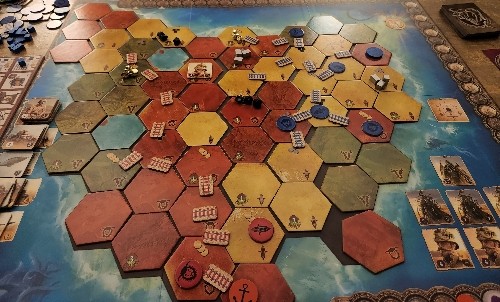 TaZmania also includes a single player Campaign Mode but I think Campaign may be the wrong word. You start with XP that you can use to buy military units and you can earn more during each game. The XP can be carried over from round (game) to round. Are you one of those gamers who ends a videogame with dozens of potions you didn't use because you saved them “just in case”? Then you are familiar with this concept. Except (fiddly alert) what units you buy with this XP do not carry over from round to round. So, you end up stocking up on XP to throw at the harder challenges. Rewards and Punishments are given based on success or failures and each round escalates in difficulty. At least the campaign has a designated end, so you know when to throw everything at the Old Ones. Well, it's not truly the “end” as a score-pad is included in case you want to play the 10 round challenge over and over again.

If you are looking to enhance the solo or two-player AuZtralia experience, the TaZmania map delivers. It's hard not to recommend that you team it with the Revenge of the Old Ones expansion (Not only for the third player option but the reinforced ports and outposts can help with those pesky pop-up Old Ones) but if you are simply looking for new, tighter areas to investigate, either solo or with a second player, TaZmania gives you a chance to explore the devil you don't know.

August 27, 2022
Rating
4.0
Auztralia: TaZmania Expansion
f you are looking to enhance the solo or two-player AuZtralia experience, the TaZmania map delivers. It's hard not to recommend that you team it with the Revenge of the Old Ones expansion (Not only for the third player option but the reinforced ports and outposts can help with those pesky pop-up Old Ones) but if you are simply looking for new, tighter areas to investigate, either solo or with a second player, TaZmania gives you a chance to explore the devil you don't know.
W
WadeMonnig Top 10 Reviewer 195 reviews