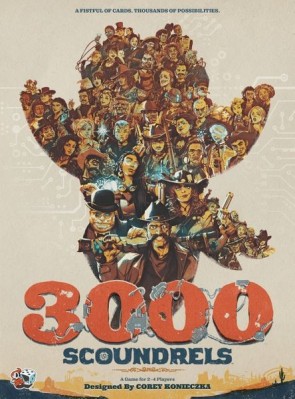 A great weird western from one of gaming's most innovative designers.

3000 Scoundrels has a gimmick buy by jingo it’s a good one. Calling back to designs that have used  layered, clear plastic cards to create or modify gameplay effects like Gloom and Mystic Vale, Corey Konieczka’s wonderful sci-fi western yarn published through the Unexpected Games imprint offers us quite literally 3000 possible characters that might saunter into the narrative by combining a character card featuring an adjective with a job card and squishing them into a sleeve. One game you might see a Funny Abomination, a Filthy Judge, a Reckless Chef and a Holographic horse. But then you may never see any of these diverse and respectfully representative misfits again in future plays. The absurdity slots in neatly with the storyline, which tells us that a time traveler went back to the Old West and left behind his smartphone and other futuristic artifacts that the player characters are looking to steal for purposes both fair and foul. And you gotta hire some of these 3000 Scoundrels to get the job done.

This is an unusual game in today’s market because it isn’t a drafting game, it’s not worker placement, and it’s not deckbuilding. I couldn’t point at any popular game released in the past five years and say “yeah, that’s a riff on that other one”. And to be frank, that means a whole fucking lot to me these days because it’s rare that a design comes out anymore that isn’t Splendor 2.0, Blood Rage 2.0, or Terraforming Mars 2.0. It’s not exactly an unprecedented design though, it’s fundamentally a bluffing card game with some very much appreciated player interaction welded onto a very streamlined engine builder driven by these Scoundrel cards. Strange bedfellows for sure, but it works and the outcome is a fun, smartly designed game that knows exactly when to take bow and never gets overburdened with extraneous mechanisms or rules. 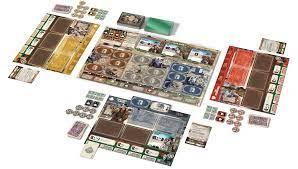 Each player gets a stack of 9 Poker cards that they use to select their action for the round from an array at the bottom of their character mat. You can scout the relic-containing safe cards in three different locations, secretly flipping them over to see what’s there. Then you mark it with a poker chip in your color, publically indicating the value of the treasure there – and you can lie, hoping to lure someone into a low value item or you can lowball to hide that you saw the one with the highest points in the set. There are a couple of money-making actions and the all-important one where you steal a safe card from the board. The catch is, you only get four of the nine Poker cards so if you want to do something and you don’t have a card for it you have to lie about the face-down card you’ve used to select the action. If at any point someone suspects you are lying, they can dispatch one of their three henchpeople to that card. At the end of the round, if you lied, the player that caught you moves up on a Reputation track that offers bonus points but if they falsely accused you, they go down on the same track and their flunkie goes to jail, requiring a Sheriff’s Office action and two bucks to get them out.

Now, how the Scoundrels play into this is that you can hire one out of a display of three at the end of your turn. Their currency costs depend on their combination of cards, with artwork sometimes obscuring the dollars indicating price. Once purchased, they slot into five spaces on the mat. Some have beginning of turn, ongoing, or “if-then” abilities. Others activate when you play certain number cards. And then there are some that are dependent on adjacency in your Scoundrel grid. The variety of effects and abilities creates some wonderful discovery opportunities as you realize that the Nosy Bounty Hunter that was just put into the display combos up with other Scoundrels you’ve hired. Or maybe you just want to bring them on as a day player to do something you need and then replace them once the grid is full up and another Scoundrel looks appealing.  In one game, I created an absolute killer money making system that rewarded me for getting my Henchpeople in jail through bad bluff calls and bailing them out. All five of my cards- randomly generated and available at the right times- just happened to synergize that way.  In another game my daughter’s array of Scoundrels pretty gave her free pick of the safes on the board because her entire strategy was based on stealing them – whether they were scouted or not.

There’s three days to the game, with four plays each and it’s about an hour. At the end of the game, you count up the number of microchip points you’ve got on the artifacts you’ve recovered (and you can only have three of these objects in total), Reputation, and there are some Scoundrels that have tech so they count for points too. Any relics you have with a poker chip on them from scouting also give you a bonus if the value was accurately stated – even if it’s not your chip. There’s sort of an unusual pacing thing in the game where the opportunities to steal safes seems to increase dramatically toward the end which feels maybe just a touch artificial but it also allows players to play the long game and optionally steal with better information toward the end rather using up treasure slots on junk in the earlier stages.

What really makes this game work is that it presents a light engine building and card effect combo system but maintains player interaction through a common board and a system of incentives to actually play the game with the other players. The bluffing, which is also quite light but engaging, will make you look side-eyed at your opponents and the end-of-round reveal of who told the truth and who didn’t in their action selections is always entertaining. It’s satisfying to catch someone stealing or playing to activate a powerful Scoundrel combo with their 0 card because you just know they used the proper number last turn and didn’t draw it again on this one. There are incentives to lie about the safes you’ve scouted, but also incentives to tell the truth in hopes that you get to steal that 7-value artifact before someone else does. 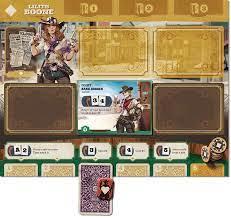 This is a clear, direct design with a concise scope and execution despite there being 3000 characters in the box – it calls to mind the kinds of games that were popular before Kickstarter bloat became a design brief for far too many folks working in the field today. There’s almost a modesty to it that I love- it doesn’t overreach, it doesn’t launch with 10 more SKUs and it’s a lovely, self-contained and satisfying experience that reminds me of how game designers used to work within limitations and reasonable scales to produce exciting and compelling work. It’s great to see Mr. Koniezcka prospering in his post FFG career and I for one am very interested in seeing this talented, forward-thinking designer continue to work in smaller spaces.

Unexpected Games kindly provided a review copy to us via Asmodee. As always, ThereWillBe.Games does not accept payment for reviews or editorial content.

How does all of this card interaction work? Sounds like a lot of icon overload or text heavy, or does it have a good balance? Seems like the kind of game you might forget an action or modifier if that mat doesn't keep it all in order for you.
Read More...