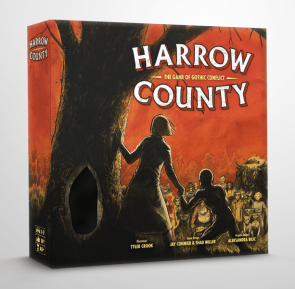 Sometimes, a game just gets you at the box cover and Harrow County got me by the jugular right away. In part, it’s the cover, where a girl steps out before a crowd, hand in hand with some stooped thing under a blood-red sky. In part, it’s the strapline “the game of gothic conflict”. In part it’s the name on the box: Jay Cormier is responsible for Mind MGMT, perhaps the best game of last year, and further back also for Junk Art one of the finest dexterity games ever to grace my table. So I lift the lid and dive into the smell of fresh cardboard.

Inside, there’s no rulebook but that’s fine because this is a pre-production copy, so what I’m about to tell you may not entirely hold true for the final version. It’s on Kickstarter now if you want to take a closer look. In the meantime, I have to make do with a confusing online document of the rules which I match, piece by piece, with the contents of the box. Turns out that, like Mind MGMT, this is based on a graphic novel series, so I pick up a couple of issues and read through for some background colour.

What we have here looks a lot like a standard dudes on a map game. A board is chosen from among several sets of hex maps, comic art terrain painted in the spaces. At one end we have the protectors who want to rescue the townsfolk figures on the opposite side of the board. At the other end, we have the family, a clan of warlocks who want to destroy the buildings on their opposite side of the board. Achieving each of these objectives bags their player two points, winning a battle bags one point - at least in the initial scenario - and the first to seven wins.

Right away, it’s clear from the action system that this isn’t a standard dudes on a map game. You only get four different actions per turn, which you can execute in whatever order you want. One of them is an attack which, after you’ve taken it, you can repeat in place of other actions without the small bonus you get on the first execution. Attacks are resolved by a cube tower built into the box that holds some of the cubes thrown into it: the side with the most cubes that emerge is the winner. The ability to repeat attack actions is fascinating, allowing you to undertake high-risk, game-winning onslaughts at the risk of neglecting other strategic areas. 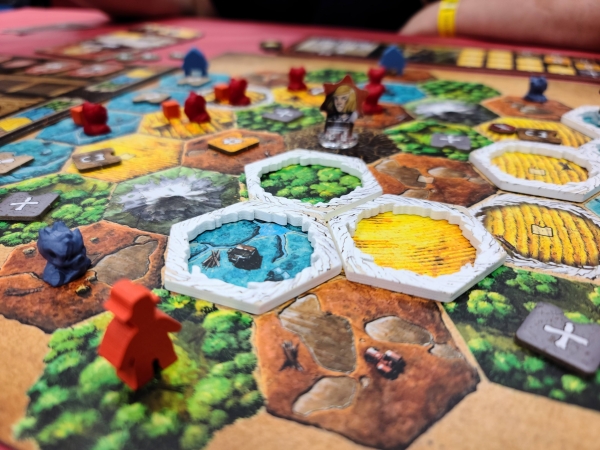 The other actions can only be taken once each and can’t be repeated. The most important of the four is “abilities” which allows you to move your units, called haints, spawn new haints or “strengthen” which gives you additional cubes for your next fight. However, there’s a significant asymmetry built into how these work for the two players. The protectors get to choose one of those three things and do it well. The family, meanwhile, pulls tokens from a bag to dictate which of these abilities they can execute, getting a random mixture of weaker effects. Both sides can strengthen their abilities by moving to collect tokens from the map.

Turns out that this is quite a fun split. Playing as the protectors feels more like an action-efficiency game where you can be certain of your options each turn, but you need to plan carefully to ensure you get the most out of the right actions at critical times. You’ll want to move on your first turn to collect tokens, for example. But go too far, too fast, and you leave yourself open to attacks that you can’t resist because you don’t have enough haints or cubes for the cube tower.

For the family, meanwhile, it’s all about making the best of what fate vomits into your palm each turn. You have a lot less certainty so you need to judge the time and strike when fortune hands you the appropriate hot irons. But leave it too long to upgrade and the protector’s juggernaut will steamroll your relatively weak options. It’s a very clever dichotomy because, unlike most asymmetric games, these two factions have very different playstyles, one for thoughtful planners and one for those who like to roll with the punches. 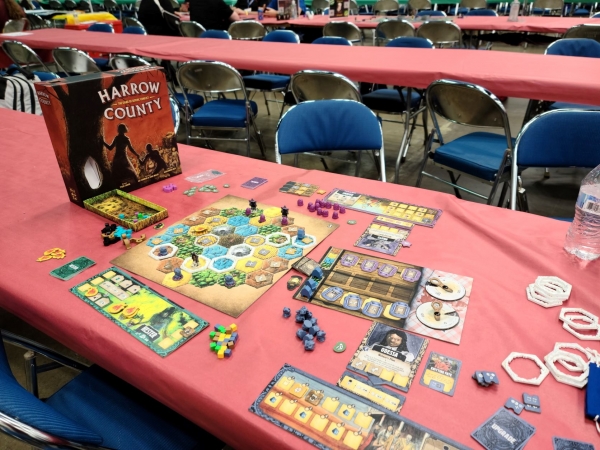 The other two actions are less immediately engaging. One is wild, which lets you take an action of your choice and gets more powerful as the game goes on. The final option is the legend action, which activates your character piece’s special power, linked to their asymmetric victory conditions. These extra points haunt the game like a spectre. Clashes are common, but if you find yourself on the losing edge, you can work your special power and wild actions to try and creep towards your victory conditions instead. They’re like conveyor belts across the map. Once built and activated, those extra points can suddenly swing the game in your favour. It still might come down to a last battle as to who edges the seven, a thrilling last rattle of the cube tower to cap a game of careful decisions.

Further scenarios throw in a deck of cards - which are used differently by the family and the protectors - a third faction allowing a third player and new character options. But as you may have guessed, these “scenarios” are really just learning aids. Harrow County is a double whammy: it’s both innovatively unfamiliar and complex. Even the initial scenario takes some grappling with to understand, the rules awkward, the concepts baffling. But your reward for the struggle is a whole new world, a conflict game that brings conflict into fresh fronts with its asymmetry, variety and knife-edge balance of strategy and luck.

That world, however, doesn’t feel a whole lot like the Harrow County of the comic I was given. That’s a dark fairytale world, full of secrets and portents, building to an apocalyptic finale. The game that bears its name has only the apocalypse to show for its theme. Horror is relegated to the disturbing humanoid features of the little haint pieces and to the odd card or special power. Mystery only comes from wondering what diabolical strategies your opponent might be plotting.

But while that’s a shame, it doesn’t devalue what we have here. I’ve been playing dudes on a map games since before the word “dudes” entered the British vernacular. I thought I’d seen every take on the topic that cardboard and plastic could manage between them, and that we’d entered a world of tinkering with the formula. But Harrow County is a testament to the ability of human ingenuity to find fresh soil in well-worn furrows, a two-hour conflict game that blends elements of strategy and randomness, timing and tactics, into a new shape with wide appeal if you can crest the learning curve. It might not be scary, but it’s novel, and in the age of identikit kickstarters, I know which I value more.

Harrow County is now live on Kickstarer. The publisher supplied a pre-production copy which may be subject to change.