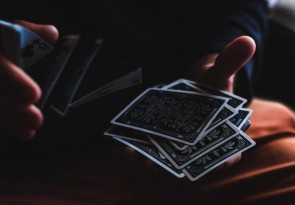 As you can probably tell from my review of The Crew, I love trick-taking games. I grew up with them. I learned to shuffle cards when I was about six and started to play Skat with my family when I was about eight. In secondary school, I learned Doppelkopf. I didn't play them for many years after I left school and it was only when I played Vivaldi at Gaming Rules' evening during last year's Essen Spiel Messe that I rediscovered the genre. So I wanted to talk more about my fascination with these games.

These are all very traditional, classic card games, that have been around for centuries and are often played slightly differently, depending on the region or country they're played in. They are all competitive at heart, even though many are played in teams, giving them a co-operative flair, where either one person plays against the rest, or the teams have the same number of players.

All trick-taking games have some common terms. Suits and trumps feature in pretty much every trick-taking game. These terms are important and need to be understood, before you can play these games. In particular, the concept of "following suit" is important. It is this that means all players have to be honest, because everyone's hands are private, so nobody will know if you did actually follow suit or not - until you play a card of that suit later in the game.

For the same reason, you do have to be attentive to what everyone plays. There is a certain amount of card counting going on in everyone's heads. You don't necessarily need to know all the cards that were played, but knowing if others have cards of a suit and if they have any trump cards left are the sort of things you do need to keep in your head to play well.

As a result, trick-taking games have a language that's unique to them. Every card you play can convey information to the other players. In fact, every card you play should convey information to your teammate, but ideally no information, or as little as possible, to the opponent. Whether you take a trick, that your partner already has in the bag, or whether you play a card to offer up to be taken, it all has meaning and the response of the other players will give you more clues as to what cards they have or haven't got.

Even when you take a card from your hand, then hesitate, put it back and play a different card can give the other players a lot of information. In fact, any sort of hesitation is full of meaning, just as much as when you play your card very quickly, without thinking.

Now, what I haven't mentioned is that verbal communication isn't really allowed in most trick-taking games, even though it's very common to hear players happily announce when they take a trick or give their teammate a lot of points or challenge the opponents to take a trick. There is a lot of taunting and bluffing. Yet, announcing which cards you have, if you want the next trick or anything that directly reveals anything about your hand is strictly forbidden.

Bridge is famously strict. In tournaments, there is only so much you can and can't do, because long-term partners have found ways to signal information to each other in very subtle ways. Of course, if you play Bridge for fun, the rules are more relaxed, but it is amazing to think how important table talk is in trick-taking games.

Trick-taking games aren't this old-fashioned genre of games though. Vivaldi is a relatively recent revamp of the traditional Briscola Chiamata for example, and of course, The Crew is a new take on trick-taking games and the first version that creates a fully co-operative experience.

So it seems that trick-taking games are here to stay. They've been around long enough and are still very popular and with new entries coming into the genre, I should be kept busy for some time to come.

the_jake_1973 replied the topic: #317200 15 Dec 2020 11:13
I stick to the classics, US classics at least, for trick taking games. The Crew being the exception. Spades is my favorite, although since leaving the army it is rare to find local players. Euchre and Hearts would be the follow on favorites and it seems everyone in Michigan plays Euchre, so I am not at a loss for players. My wife and I are famous in our circle for not being able to be compatible Euchre partners. My grandparents and great grandparents were Bridge players, but none wanted to pass along the knowledge. We ended up with Cribbage and Backgammon, good in their own right, but it would have been nice to learn bridge from my grandmother as well.

Ah_Pook replied the topic: #317203 15 Dec 2020 11:39
My dad loves bridge and played competitively for a long time, and every time he's tried to teach me stuff it just slides right off my brain. Something about it doesn't click for me at all.

Disgustipater replied the topic: #317211 15 Dec 2020 13:21
I play a lot of Hearts and Three-Handed Whist (or Merry Widow as they call it) with my wife and her parents. The no table talk thing took me a while to get used to. I’m still not great at any of them compared to the family that has been playing together for years.

I looked into The Crew as an alternative to Hearts and when I asked my wife if she thought her dad would enjoy it, she said, “Why bother? He knows Hearts really well as he’s been playing it for decades. Plus, he enjoys it. Why change that?” At that point I realized she was right. I was looking for an alternative for me, not him. He likely wouldn’t really enjoy it. But that’s fine.

I like trick-taking games quite a bit, although I’m not super great at them.

THE CREW is fantastic although more of a trick-taking game for game nerds than one for traditional card game fans.

There’s a new(?) game on BGA called OH SEVEN that’s in the OH HELL family. I think it’s the best of the family with the exception of WIZARD. You use a standard deck with A-7, and Q of each suit. Qs are zero, everything else is face value. The main twist is that you have to use a card in your hand to bid (it’s revealed and then returned to your hand). So you might be forced to bid higher or lower than you really want, and have to play accordingly.

dragonstout replied the topic: #317215 15 Dec 2020 16:38
I could not recommend more that folks intimidated by Bridge, and even folks not intimidated by Bridge but not great at Bridge, play Whist. This USED to be the big trick-taking game in the English-speaking world, and Bridge evolved as a more hardcore, luckless, WAY more complicated version of it. But original Whist teaches you a huge amount of the skills you need to play Bridge, and is a PLENTY deep game on its own, despite being literally the simplest trick-taker I know.

southernman replied the topic: #317246 16 Dec 2020 10:29
Used to be a big Euchre, Cribbage and 500 player as a teenager in New Zealand and then as a young adult where it was played during lunch breaks on work sites. Just wiki'd them and interesting to see the history for Euchre and 500, where it used to be very popular and where it is still played - apparently Euchre was regarded as the USA's national card game pre 1900 (take that poker).
en.wikipedia.org/wiki/Euchre
en.wikipedia.org/wiki/500_(card_game)

On one of my worksites they used to play 'Club' Euchre at breaks, Basically you'd have a table of players, more than six was quite common, and playing the normal rules people would decide to be in or out once trumps had been decided. If you stayed in you would score a point for every trick you took or lose 5pts if you failed to take a trick, the winner over the day or days would be first to a specific total. The nub was that if Clubs was turned up it had to be taken and every one had to stay in, or if someone went clubs then everyone had to stay in - a good way to piss workmates off for the rest of the day if you had the opportunity to go clubs with a good hand and send multiple people down

I don't play any trick-taking games - about a dozen years ago or so we used to play Wizard at one of my groups as a filler, a decent version of 'Oh Shit' or whatever it is called where you live, but few dedicated gaming sessions each week means only the best board or card games get out (and we're lucky to have lived in teh last 20 years with great games).

jeb replied the topic: #317250 16 Dec 2020 10:44
Americans are raised on EUCHRE, HEARTS and SPADES in my experience, with a smattering of PINOCHLE and KLABBERJASS based on geography.

BRIDGE is for grown-ups.

A popular WHIST variant is OH HELL, where the sum of bids can't equal the round number (ie, someone has to miss). Israelis love this game and refer to it as WHIST.

I've mentioned here before, but my favorite trick-taking game is PITCH (sometimes called SETBACK), where there are only four possible points in a hand (High of trump, Low of trump, Jack of trump, and Game, found by summing card values). Not all points might be out there--you only have six cards. Winner of the bid declares trump, and must lead trump as the first card. Here's the coolest part: you can always trump out of suit. That is, you have to follow suit, as one is almost always bound in trick-taking games; but in PITCH you can always trump out of suit, even if you still have some of the led suit. Makes things really interesting, especially as it comes to winning the Low point.

Shellhead replied the topic: #317253 16 Dec 2020 11:05
I used to sometimes play Hearts on my computer during lunch breaks at an old job. When I attended Indiana University, Euchre was a big deal and people often played it at small parties. My vague recollection of Euchre was that a round usually ended early because everybody at the table except me understood that the rest of the round was a foregone conclusion and they all tossed their cards on the table. I thought it was the worst game ever for skipping half the play.

jeb wrote: A popular WHIST variant is OH HELL, where the sum of bids can't equal the round number (ie, someone has to miss). Israelis love this game and refer to it as WHIST.

That's one of the names Oh Shit is called (I was trying to be polite), also 'Up and down the river' while Wizard, as mentioned earlier, was a commercial variant of that.
Read More...