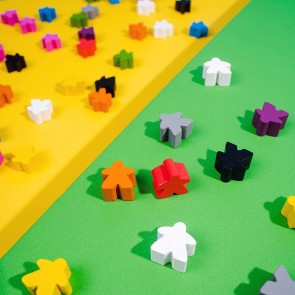 On occasion, the smallest thing can change your path, can start a new tradition or even a new outlook on life.

Such was the advent of Lazy Karl, in a tent at the World Boardgaming Championships in Lancaster Pennsylvania in 2008.  My buddy Jeff and I had day-tripped at the crack of dawn and were early to the tables.  We grabbed a copy of a new game called Stone Age to spend some time with it and learn how to play.  Neither of us had heard of it, and as we spread the pieces out and cracked open the rulebook a guy came up and offered to teach – Dominic Crapuchettes.  Dominic wasn’t the designer of Stone Age, but he had experience with it.  Jeff and I were all ears and the three of us sat down to a session.

As it turns out Dominic is quite talented at teaching games, a valuable trait for his line of work.  And given Stone Age’s use of what can politely be termed neolithic symbols (more commonly called vague and confusing symbols) to define how the game plays he proved an invaluable addition to our first play-through.

But none of that changed how I fundamentally look at games.  What did change it was Karl.

I generally play red, and in the copy of Stone Age we were playing one of the red meeples had a bit of an oopsie.  It was missing a chunk that prevented it from standing properly.  But no problem – I laid the meeple on its side, arbitrarily named it Karl and indicated that he wasn’t the most motivated man in the prehistoric world.  Better suited to management than labor, he took it upon himself to nap whenever it was possible.  As we proceeded Karl the miscut piece became a part of the game’s narrative, a character that wandered around, didn’t find food, didn’t find stone . . .  More or less anytime one of my dice came up empty it was Karl that had let the tribe down.  On the rare occasion he DID bring home the goods it was cause for celebration.  So with an oddly cut piece, a few words and the help of Dominic and Jeff’s imagination we created a second narrative on top of the game's original, inserting a bit more story into the title.

Stone Age is a fine game, but it could use a bit more story.

Most of the time that would be enough, and that one curious play would be the end of it.  I love role playing as much as boardgaming, but it isn’t generally a big deal to me to create a story where it isn’t present in the game’s rules or setting.  But for some reason Lazy Karl stuck, and as Jeff and I worked our way through other games on the library table I brought Karl with me in spirit, finding a meeple in each title and laying it on its side during play.  (Note that Karl is played on his side, not his back.  He snores when he’s on his back, drawing attention to his inattention.  So Karl is always played on his side.) 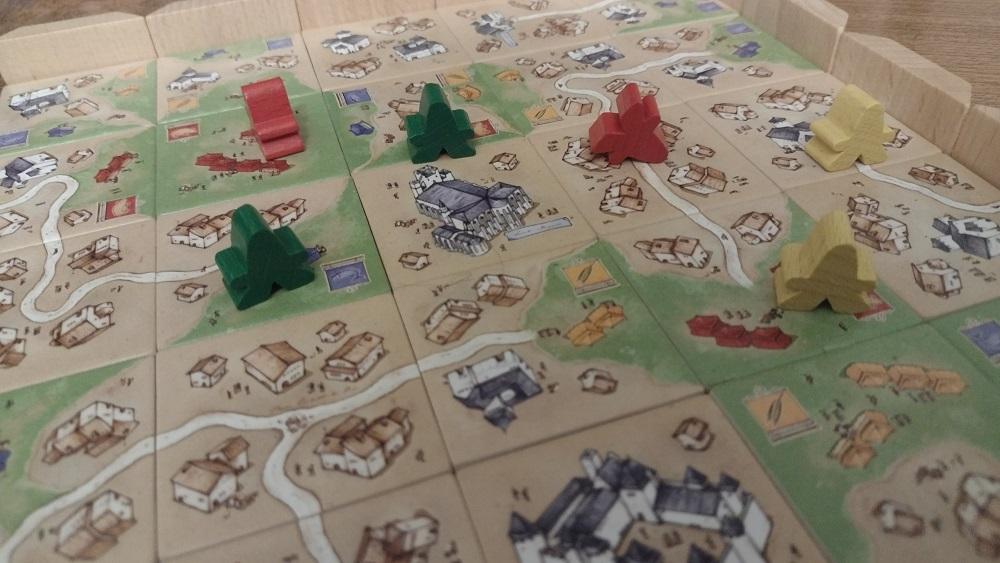 This was just a day-trip to Lancaster but something bigger had come around -- Lazy Karl had come to life, had come to represent more.   Jeff liked Stone Age so much that he promptly bought a copy, providing an excuse for me to speak of Karl again and again, though his copy (unfortunately) had all properly-formed meeples.  I offered to sand one down and Jeff replied, “I think they lie down just fine as they are.”  Fair enough.  Just about any meeple can be laid on its side, so Karl is a frequent visitor to our gaming.

One could argue that spending the mental energy bringing Karl to life would be better spent on working to win the game.  But over the 14 years of Karl’s existence I’ve come to realize that he’s serving a purpose beyond levity at the table.  He’s offering an outlook.  He’s a reminder to me that I need to not take something as silly as a boardgame too seriously.  Each of us has a need to come up for air now and again and games are about leisure time.  In the midst of those heads-down games where you’re counting every piece and looking at every angle, something (someone) like Karl offers a reminder that you need to not get to wrapped up in unimportant details.

Once in the midst of a very tight game of El Grande is was working entirely too hard at my turn.  My buddy Stephen asked “where’s Karl?”  This was on my old Decennial edition, all cubes, not a meeple on the board.  Karl’s hard to pick out when all six sides are the same.  Stephen interrupted me while I had been grinding my teeth on the too-many-options in a very close game, and Karl was a convenient distraction.  It was a way Stephen could politely tell me I was overanalyzing.  I pointed to my sole cube in Valencia, outnumbered by four other colors.  Stephen replied, “good spot for him.”  In the moment of interruption I remembered that sometimes you need to analyze, sometimes you need to act.  The options were all more or less equivalent, so it was time to make the call.  There was no money on the table after all.  The option I had instinctively seen from the start was the one to go for.  It was every bit as good as the others, and it was mine.  This was the move that would feel right to me, that reflected a facet of my play style for the game.  Karl had said “you got this buddy, trust your gut.”  Then he dozed off and didn’t say anything more for the rest of the game.

For the critical things in life it’s worth getting a bit of scare up and taking the time and effort to get things right.  But on game night that’s a pretty rare occasion.  Karl keeps me honest, reminds me that I need to enjoy my leisure time, not lose sleep over it.  That’s a well learned lesson for me given the stress in my line of work.  As luck would have it, the lesson fell in my lap for no particular reason at all, started on a lark and nurtured by fellow players who just maybe had a little more insight into Karl's nature than I did on that Saturday morning in 2008.

Oddly enough through a quirk of luck our podcast episode that dropped today mentioned Karl for the first time, on the same day this article came out. Couldn't have planned that if I tried.

Edit: Nobody got it. Karl Bolero…Caballero

SuperflyPete wrote: Edit: Nobody got it.