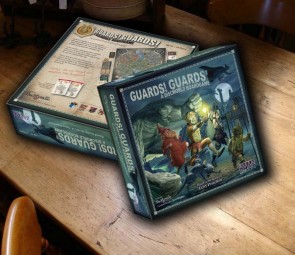 With the Eight Great Spells missing from the Unseen University® the future of the Disc hangs in the balance.

Guards!Guards! sees players taking on the role of newly recruited members of the Ankh-Morpork City Watch.   On their quest to save the Discworld, the players are faced with the many hazards of everyday life in Ankh-Morpork, the Discworld’s oldest, grubbiest and least law-abiding city.   Some perils are thrust upon them by the hand of fate.  Others are directed at them by their opponents in the shape of sneaky guild abilities, or skulking saboteurs, secretly planted to disrupt their attempts to return the Great Spells to the Unseen University.   Add to this the constant threat of being trampled by the Luggage, an 800-pound magical chest thundering endlessly through the city on hundreds of little legs, and the players soon learn that life on the Discworld is not always easy...

With over 90 characters cards illustrated by Discworld Artist, Stephen Player, each carrying a short quotation defining the character in the authors own words, the players are quickly emerged in the magical and wonderful world created by Terry Pratchett.

Backspindle Games. New to the scene, designers Boyd & Brashaw bring a fresh approach to this boardgame.  Both long time game fans and avid readers of Terry Pratchett’s books, the unlikely team of talented graphic designer Leonard and three-time Karate world champion David, have produced a game that is visually enticing, strategically challenging, but above all great fun!

Axis and Allies
4.0
S Ska_baron
"One of my original board games that I played throughout..."