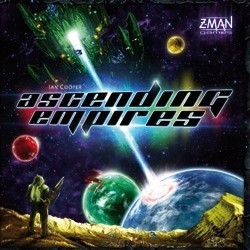 Humanity has been at each other's throats since time immemorial. Now, in another galaxy, humans wage war amongst themselves again, but this time, with the aid of alien technology found on other planets.

Ascending Empires offers a nice mixture of building, exploring, and development, along with combat via a simple dexterity element. Players flick their starships into orbits around planets to defend or attack them or surround enemy ships to destroy them.

Ascending Empires is sure to sate the desire for a space empire building game that plays simply yet deeply.

5 stars
(0)
4 stars
(2)
3 stars
(1)
2 stars
(0)
1 star
(0)
Rating
3.7
Already have an account? Log in now or Create an account
April 19, 2019 (Updated: April 29, 2019)
Rating
4.0
This was my Game of the Year in 2011. If you like fantasy as a theme, you are set in the board game world. You can elf as many dungeons with your wizarding stick as your heart desires. But if you like science fiction, then obviously what you want is a fourteen-hour long grindfest of sprawling space empires all trying to be the first to research Calculus so they can build terraforming stations or whatever. What I’m saying is, space games tend to only come in one flavor. Ascending Empires changes this, bringing the space conquest field into a fun, fast, and more appealing format. Yes, it has a flicky element, but unlike previous games with this element (such as Catacombs, which is now in the trade pile), this isn’t the only feature of the game. There’s a lot more going on, but not so much that you need to set aside an entire afternoon and your plans to ever know the touch of a woman to experience. The only, only, bad point is a huge one — the production values on the game boards are lousy, and this was almost enough for me to knock it out of the top spot, but I’ve had so much fun playing the game as is that I can’t really complain too much.
L
Legomancer Top 10 Reviewer 158 reviews
Comments (0) | Was this review helpful to you? 1 0
April 19, 2019
Rating
4.0
J
Jexik Top 10 Reviewer 59 reviews
Comments (0) | Was this review helpful to you? 0 0
April 18, 2019
Rating
3.0
D
dysjunct Top 10 Reviewer 133 reviews
Comments (0) | Was this review helpful to you? 0 0
Discuss this article
Log in to comment
Posts in discussion: Ascending Empires

Codenames
4.0
H HiveGod
"Players are low-level wetwork operatives who have only moments to..."