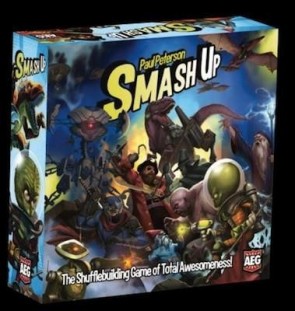 Alderac is pleased to announce Smash Up, designed by Paul Peterson, coming this August!   Smash Up is a new style of "Shufflebuilding" game.  Players take two 20-card faction decks, shuffle them together, and start competing to smash bases!  However, each faction has a different mechanical focus, and each combination brings unique play to the game.

When the game begins, players take turns drafting one of several faction decks.  Once each player has two decks, they shuffle them together, combining their distinct abilities into a unique 40-card deck.  Players then deal out a number of Base cards, and play their decks to attempt to have the most power on a base when it is scored.

It may sound simple, but how simple is it when your opponent’s Zombie-Ninja Assassinate your minions then create an Outbreak, loading the Base with minions from their discard pile?  Or when their Pirate-Dinosaurs Full Sail onto the base with the mighty King Rex, whose massive power dwarfs that of other minions?

Each combination gives a different experience, Pirate-Aliens play very different than Pirate-Zombies, and with 8 factions in the base set there are tons of combinations to try out!

You can visit the official site at http://www.alderac.com/smashup

5 stars
(0)
4 stars
(0)
3 stars
(1)
2 stars
(1)
1 star
(0)
Rating
2.5
Already have an account? Log in now or Create an account
A Super Slo-Mo Car Crash
August 12, 2019
Rating
3.0
After 3 plays: A lighter "take that" card game with THE AWESOMEST THEME POSSIBLE: disparate genre tropes wedded as conjoined twins to do battle with enemy Frankendecks. The presentation and form promise hilarious, rapid back-and-forth; this is unrealized in actual play as everything bogs down with the reading Reading READING of too much text on most every card, leading to more rereading and rules-interaction head scratching.

Perhaps this will pick up with familiarity?

Wings of War: Famous Aces
5.0
J joseaguerof
"Your plane is a card, you've got manouver cards as..."