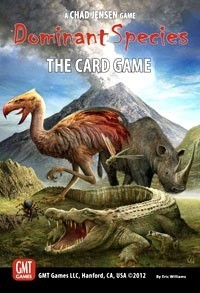 90,000 B.C. - A great Ice Age is fast approaching, as yet another titanic struggle for global supremacy unwittingly commences between the varying animal species. Dominant Species: The Card Game is a fast-playing game that abstractly recreates a tiny portion of ancient history: the ponderous rescinding of an Ice Age and what that entails for the living creatures trying to adapt to the slowly-changing earth. Players use six major animal classes - mammal, reptile, bird, amphibian, arachnid, or insect - to further their goals as they strive to become the dominant species in as many different terrestrial and sea biomes as possible in order to claim valuable victory points.