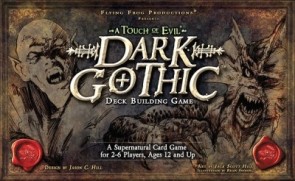 Evil is Afoot! Fend off the malevolent forces converging upon you in Dark Gothic, a supernatural, monster-hunting deck-building game rooted in Flying Frog Productions' chilling A Touch of Evil setting.

In Dark Gothic - a semi-cooperative, deck-building game set in the A Touch of Evil universe - players assume the role of competing, monster-hunting heroes at the dawn of the 19th Century, forced to work together to defeat creatures and adversaries intent on destroying the town.

Utilizing the game’s three currencies (combat, cunning, and spirit) to purchase cards from a common tableau, players develop their own decks during play, and must avoid or contend with "Dark Secret", "Hungry Dead", and "Shocking Discovery" cards which award penalty points at endgame, or trigger negative, universal effects.