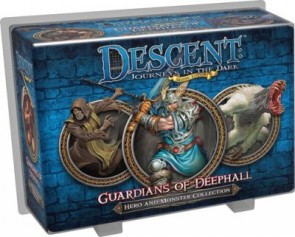 The stronghold of Deephall was once home to a thriving, peaceful community, but now, the mountain city lies under constant threat of invasion. A horde of undead, led by dark priests, attacks Deephall constantly. These unending attacks deplete the city’s guards and erode the peoples’ resolve. Four heroes are all that stands between Deephall and the city’s extinction.

But strength alone will not be enough to save Deephall. To put an end to this evil, the heroes must venture into the icy caverns high above the city and find a mysterious pendant that may hold the key to Deephall’s woes.

Four heroes leap to the defense of Deephall in this Hero and Monster Collection for Descent Journeys in the Dark 2nd Edition, lending their skill with arms and their magical prowess to the city’s defense. You’ll find the orc warrior Mordrog battling in the front lines alongside Lord Hawthorne. At the same time, Sahla, a gifted Healer, focuses his power by channeling the strength of other heroes, even as the deadly assassin known as Silhouette uses her stealth and cunning to cut her enemies down.

The evil forces of the overlord array themselves against these heroes. Dark priests spearhead the attack on Deephall, using their knowledge of the arcane to deadly effect. The key to Deephall’s trials, however, lies in the icy caves of the mountains, guarded by ferocious wendigos and crypt dragons.

The battle for Deephall’s fate plays out in two entirely new quests. In Guardians of Deephall, the heroes must defend the walls of Deephall against a seemingly endless assault of undead and dark priests. Then, in The Curse of Iona, the hero party must venture into the icy lair of a dragon sorceress to reclaim a pendant that may be Deephall’s salvation.

Power Grid
5.0
BB Black Barney
"I'm quite sure that Power Grid is probably my 3rd..."