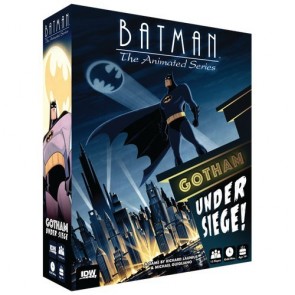 Batman: The Animated Series – Gotham Under Siege, from IDW Games is the first in a series of tabletop games based on the legendary cartoon franchise.

Batman: The Animated Series – Gotham Under Siege is game for 1-5 players who take on the role of the caped crusader and his allies as they protect Gotham from the full range of Batman’s Rogues Gallery. The game puts players in the role of Gotham’s heroes as they use dice allocation and threat management to defend the city against henchmen and bosses, and fight to save the city from being destroyed.

This game features all new artwork, character miniatures, 3D city buildings, and other board game elements, Batman: The Animated Series – Gotham Under Siege captures the action and adventures of the animated series right on the tabletop.

Subsequent releases in the series will capture and celebrate the Batman Animated universe, packed with heroes and villains, featuring them in settings new and still familiar to fans and gamers. Developed with renowned artists and designers, IDW Games is excited to bring these beloved characters to the tabletop for fans of Batman: The Animated Series to enjoy for years to come.

ubarose wrote: Did we already, talk about this, or was that a different Batman game? This one looks kind of cool.

Different Batman game, by the same folks that Kickstarted a big Conan game a couple of years ago.

This Batman game doesn't sound great to me because the dice allocation mechanic sounds like it will be relatively dry and abstract like Elder Sign. The minis and 3D buildings make it sound like it will be expensive.

Southernman wrote: With Richard Launius on the credits it must start out on the plus side.

Launius also designed Elder Sign, so I am doubling down with my doubts about the dice allocation mechanic.