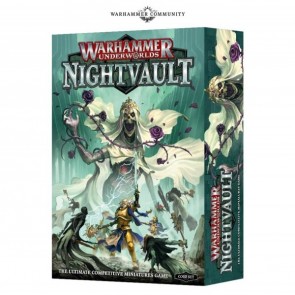 Nightvault, the second core set for Warhammer Underworlds, adds new factions and playing options to the game while remaining fully compatible with the original game and its expansions. It introduces the first magic using characters to the game, along with a new system of magic spells that they can use to gain an edge over their opponents, and advances the storyline to account for the events occurring in the wider world of Warhammer known as the Shyish Necroquake. Warhammer Underworlds: Nightvault.

The boxed set includes everything needed to play the game, including two all-new warbands. The first warband features ghostly Chainrasps lead by a wraith-witch called the Briar Queen. Opposing them are three members of the Sacrosanct Chamber of the Stormcast Eternals. Both warbands feature characters that can take advantage of the new magic rules.

Cleopatra and the Society of Architects
2.5
N Nodens
"The gameplay is interesting enough, the toy factor is huge..."