Labyrinth: The War on Terror 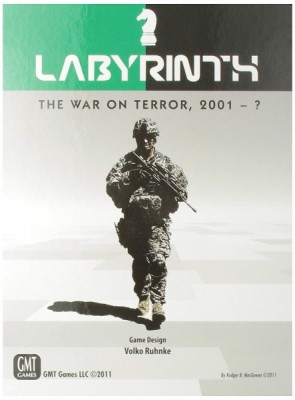 Game Name
Labyrinth: The War on Terror
Publisher
GMT Games
Designer
Volko Ruhnke
Genre
Wargame
GMT Games
Labyrinth takes 1 or 2 players inside the Islamist jihad and the global war on terror. With broad scope, ease of play, and a never-ending variety of event combinations similar to GMT's highly popular Twilight Struggle, Labyrinth portrays not only the US efforts to counter extremists' use of terrorist tactics but the wider ideological struggle--guerrilla warfare, regime change, democratization, and much more. Labyrinth features distinct operational options for each side that capture the asymmetrical nature of the conflict, while the event cards that drive its action pose a maze of political, religious, military, and economic issues.
Tweet

April 19, 2019
Rating
4.0
Labyrinth is a good game (made even better by the expansion) but abhorrently inaccurate history. It reminds me of Twilight Struggle in that TS is conceived as the Cold War as the participants saw it---I think this game is a good attempt at constructing a "War on Terror" as US officials, defense inner circle and beltway saw it. Turns out that it was a highly unrealistic view of the world in terms of what factually was going on, but I think this is what Washington thought was occuring. I facilitate back and forth about the pure ethics of having a piece of propaganda on my shelf that does, admittedly, play well.

Rating
2.5
Already have an account? Log in now or Create an account
April 19, 2019
Rating
2.5
KG
King Grunt Top 50 Reviewer 19 reviews
Comments (0) | Was this review helpful to you? 0 0
Discuss this article
Log in to comment
Posts in discussion: Labyrinth: The War on Terror