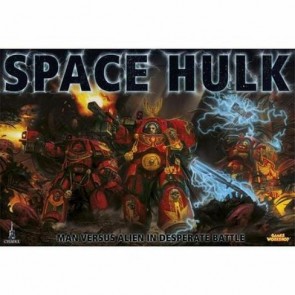 From the depths of space an ancient vessel drifts slowly towards the Imperium of Mankind - a space hulk. Within its confines, untold thousands of Genestealers slowly emerge from hibernation. The Space Marines must enter the cramped corridors and tomb-like chambers of the ancient ship to defeat this alien menace.

Space Hulk is a board game for two players, recreating the battles fought between the Space Marines and Genestealers. One player commands the Space Marines as they carry out deadly missions in the ancient Space Hulk, and the other commands the horde of Genestealers opposing them. Space Hulk's fast-paced rules simulate the tense atmosphere of a mission deep inside the cramped confines of a derelict space hulk, where split-second decisions are needed for victory.

April 20, 2019
Rating
5.0
JL
Josh Look Top 10 Reviewer 64 reviews
Comments (0) |
April 21, 2019
Rating
5.0
Probably the best two-player game ever. The asymmetrical design is easily digested and requires no previous 40K knowledge. It's just man versus nature, order versus chaos, in its most primal form. The overwatch mechanic in particular is outstanding, because it makes for tense shootouts that are almost cinematic. Definitely a classic.
SI
san il defanso Top 50 Reviewer 55 reviews
Comments (0) |

But, this is largely a puzzle where you figure out the best routes using the best pieces in as little moves as possible, while the randomness of dice frustrates your trajectory.