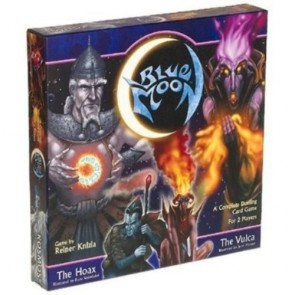 Each card is oversized, allowing more space to show off the artistic detail. Each turn, the players battle for control of the dragons, playing characters or other helpful cards from their deck, and imbuing their characters with greater and greater power, in order to overwhelm their opponent and force a retreat.

In the advanced game, players have the option of building their own deck, constructing a powerful multi-faction alliance.

The basic set provides all the materials needed to play Blue Moon, including the races of the fiery VULCA and the clever HOAX, as well as a gorgeous game board, full-color rules, and three plastic dragon figures. This basic set can be expanded by the addition of any of the Peoples decks and the Emissaries and Inquisitors expansions.