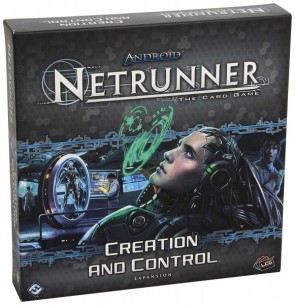 Who will write the future?

Creation and Control pits a new wave of enigmatic Shapers against the latest and greatest of Haas-Bioroid's developments in artificial intelligence, efficiency and security. The first deluxe expansion for Android: Netrunner The Card Game, Creation and Control introduces 165 new cards (three copies each of fifty-five individual cards), that will instigate dramatic new strategies and high-stakes battles for the control of valuable files and the futures outlined within them. Creation and Control focuses on the struggles between the executives at Haas-Bioroid and those Shapers who are driven to tinker with their programs and hardware by an almost-religious compulsion, but fans of every Android: Netrunner faction will find plenty of great uses for their influence, as well as twenty-seven neutral cards (three copies each of nine individual cards) that can sharpen the focus of any deck.

May 03, 2019
Rating
4.0
I like this expansion a lot. It makes HB and Shapers much more interesting to play. And as someone who doesn't plan a lot of decks themselves, I appreciate the preconstructed decks which face off really well against each other and are great for casual play.
MT
Matt Thrower #1 Reviewer 286 reviews
Comments (0) |

Dominion
4.0
H HiveGod
"A mechanical kick in the pants. Draft cards to build..."