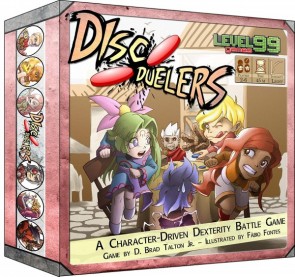 Setup your Arena, Choose your Team, and Put your Skills to the Test! Disc Duelers is a character-driven game of strategy and skill where players build a team of characters with unique and diverse powers, equip them with gear, take aim, and attack! And, dueling is just the start! Disc Duelers contains rules for Racing, Soccer, Volleyball, and Large Team Games!

In Disc Duelers, players control a team of 3-5 characters, which are drafted during the initial set-up. Each of the 52 characters is represented by a card and a disc. The card shows ratings for movement and attacks, plus a special ability. The game can be played on any flat surface, although a four-foot-square table is recommended. Players place everyday objects on the table to act as terrain. On his turn, a player activates a character. He may then move and attack by flicking the corresponding disc. A moving disc that hits terrain suffers no damage, but hitting other discs causes one damage to the active character. An attacking disc suffers a point of damage if it hits terrain and causes a point of damage to another character if it hits its disc. Knocking a disc into terrain or off the table inflicts an additional point of damage. A character is eliminated when it takes five points of damage. A character's ratings determine how many times it can move and attack each time it is activated. Optional item cards, if used, can be acquired during play and provide additional actions. Disc Duelers includes several play options, including classic elimination, point capture (points scored for eliminating a character, but that character returns to action), soccer or volleyball with a neutral disc representing the ball, and a race.