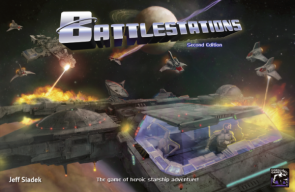 Battlestations is the game of heroic starship adventure that integrates ship to ship and boarding action in a hybrid boardgame/rpg.

The cool thing about this game is that your starship moves on the hex map simultaneously with your characters moving on the square grid based starships. The ship to ship and shipboard action is integrated. You move around your ship and operate the titular “Battlestations” to activate your ship’s modules. Use Piloting skill in Helm to turn or accelerate. Use Engineering in the Engine to get more power and use Combat skill to launch Missiles or fire the Cannon. Where you are on the ship matters because when enemy ships shoot back at you, you might get personally damaged or have to move to repair the damaged module.  You can use the Teleporter, boarding missiles or docking to go to an enemy ship to have boarding action.

This is a one vs. many game but can be played unmoderated, solitaire, or pvp. The description here assumes the traditional one versus many format in a campaign.

One player takes on the role of the enemy. They run the game for everybody else. They are the equivalent of a “dungeon master” in a role-playing game but since Battlestations is a boardgame, the enemy plays to win. I’ll have more about that later.

The other players each play a character working together as the crew of a starship.