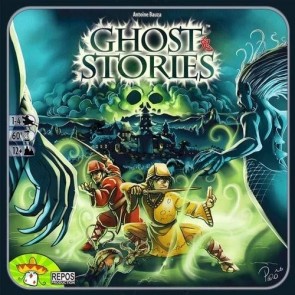 Many fell putting an end to the reign of terror of Wu-Feng Lord of the Nine Hells. The funerary urn housing his ashes was buried in the cemetery of a village in the Middle Empire. Years have passed and the cursed legacy has been forgotten by the living. Hidden away in Hell Wu-Feng has forgotten nothing. His incessant research allowed him to locate the receptacle. The shadow of his former incarnation already extends to the villagers who are unaware of the danger threatening them. Fortunately the Fat-Si (Taoist priests) keep watch guarding the border between the dead and the living. Armed with their courage their faith and their powers they will try to return the reincarnation of Wu-Feng to Hell. Ghost Stories is a cooperative game. The players play as a team against the game. Either they share a common victory or suffer the same defeat. Ghost Stories provides 4 levels of difficulty: Initiation Normal Nightmare and Hell.

Ghost Stories is a cooperative game in which the players protect the village from incarnations of the lord of hell Wu-Feng and his legions of ghosts before they haunt a town and recover the ashes that will allow him to return to life. Each Player represents a Taoist monk working together with the others to fight off waves of ghosts.

Rating
3.5
Already have an account? Log in now or Create an account
Six-Demon Bag or Hell of Upside-Down Sinners?
August 15, 2019
Rating
3.5
Rough trade in the form of cardboard and plastic. A crazy, ever-shifting puzzle that actually prevents immersion in the rich theme. If you let the mechanical aspects of the game fuzz into the background in order to provide a foundation for the experience of being a Taoist monk desperately fighting the legions of Hell, you will lose.

The game begs you to do so, with gorgeous art and super production values, but ultimately you have to look past the theme and see the grinding gears of the puzzle box if you have any hope of ever winning. Also, there's an enormous luck component (repeat die rolls to exorcise the ghosts), meaning that even optimal play can be fatally hosed with gallons of demon-tentacle spew. And the 2008 rulebook is... nigh impenetrable. I'm still not completely sure how some parts of the game work.

For all that, it's 4 stars? Yeah—it's stuck with me, I've been thinking about it, and I want to play it again until I beat it to death.

UPDATE: Dropped to 3.5 stars. Suffers from the same problem most co-op games do, but to a degree I just can't get over: one person masterminding everyone else's turn. Perhaps it's better suited to solo play instead of "one guy solves the puzzle while directing three chit-pushers".

*Seven years later.* Resurrecting this (heh) now that the kids are of age, and whaddya know, the game's pretty good with truly respectful co-op players. The X-Men-like teamwork from those who value the sanctity of the individual turn (i.e., we all have something to offer, but your turn is yours, and yours alone) makes the game shine, and allowed us to win for the first time in 6 plays. And I can see how we might need to actually increase the difficulty... and my rating.

Also: my mechanic/thematic grumblings above? Utterly nullified with good players. With the right people the game feels like it looks, spooky-beautiful.
H
HiveGod Top 50 Reviewer 54 reviews
Comments (0) | Was this review helpful to you? 1 0
Discuss this article
Log in to comment
Posts in discussion: Ghost Stories