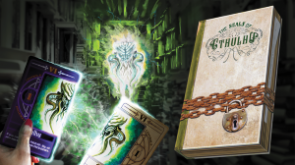 Game Name
The Seals of Cthulhu
There Will Be Games

A quick-playing yet very strategic bidding and bluffing card game, set within a Cthulhian universe, where 2 players battle for the fate of the world.

One player assumes the role of an occultist, bent on bringing about the end of the world. The other plays an investigator seeking to thwart the occultist and save the world.

Players use the forces under their control to try and gain artifact cards, seeking to complete them and unlock powerful abilities. These artifacts also allow players to gain control of other cards...at the cost of giving them to their opponent.

You must outwit and out-strategize your opponent if you hope to win the battle.

"The player who last encountered a nightmarish horror that left them gibbering and unable to form thought will go first..."

And thus your duel begins in The Seals of Cthulhu.