Now I Truly Get Magic Realm 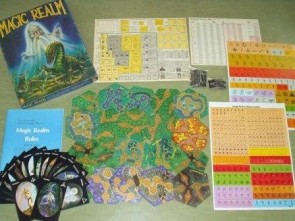 This week, I had an honest to god gaming light bulb moment.

I was messing around with Magic Realm’s digital version, Realmspeak, for the  3rd time in a couple years.  And it finally clicked.  I can now safely Magic Realm is the most creative game I’ve ever played and maybe the best.  There is not a single idea in it that is not original. That is why the game is so hard to grasp---because Hamblen approached every single question of design in the game unencumbered by other people's ideas about fantasy and honestly in some ways about boardgames period.  I have no idea how he did it and it is absolutely shocking to see a game that plays the way it does with no real reference to other games.  It does things no other fantasy design has done since.  I’ve only just cracked the surface as I’m just beginning to experiment with the magic in this game.  I have played only solitaire, though at times with multiple characters.  So here is a short list of jaw dropping things that Magic Realm does with a very playable (though impossibly tricky) system once mastered.

1) Each game is drastically different

It is amazing that the same system can hold so many different types of characters and make them completely different.  I have *never* seen a game with this kind of character differentiation, all handled for the most part through a simple system of chit distribution.  The Swordsman isn’t a mini-Knight.  You have to truly think differently to play the Swordsman.  He can’t do many of the things the White Knight can do and others he has to do differently.  Even similar characters play very differently---the Berserker and White Knight do the same sorts of things but do them subtly differently.  The White Knight wears armor and gets tired far more easily while the Berserker has to rely on his special “Berserk” chit instead of armor.

The best character example is the Witch King.  He is an amazingly creative character that through brilliant design somehow breaks none of the rules of the game.  By himself, he is incorporeal—he has no ability to move or to carry anything (he doesn’t have any move or fight chits).  He has access to a variety of spells though, and the spells are so cunningly constructed that depending on his spell choice he can do the things he wants.  Teleport to move, spells to fight, a power spell to temporarily carry heavy treasure---that is, until his magic runs out and he is back to being a weak being with no powers.  In a different, less creative, game, the Witch King would be handled by a raft of unique special rules.  But Hamblen mastered his design so completely that he fit a character totally different from every other character into the same ruleset without exceptions.

I have never played a game that featured both PvE and PvP in the same game with such, dare I say it, elegance.  Players can fight and kill each other and cooperate in the same design.  Some characters are almost designed to fit together.  Other characters are designed with only one thing in mind---killing everyone else at the table!  The Black Knight isn’t so named because he is so tough and strong (like the White Knight) but instead because he has just the right set of skills to hire some NPCs and rack up notoriety by murdering other PCs and bands of NPCs.  He’s not really terribly good against monsters.  His non-obvious strength is pure PvP!

By the same token it can just as profitably be played as a pure cooperative dungeon crawler.  Characters complement each other’s strengths and weaknesses and have many mechanisms to help and trade with one another.  Some characters are made specifically for this sort of thing (like the Wizard who has knowledge of all passages or the Dwarf who is incredibly slow and needs to follow another character to get anywhere).

The design is not tilted toward doing one or the other, though it may be depending on character chosen.  Most modern designs I see tend to choose PvP or PvE and only have a token version of the other in it.  This is a game with robust and devious options for both.

This game has a full system of NPCs and a market for trading.  Paladins hang out at the Chapel while roving bands of Woodsfolk can appear in the woods near campfires.  All can be hired by PCs, traded with or fought with.  They also each sell their own particular trade items.  Each PC character has different starting relations with each group (e.g. Woods Girl has excellent relations with the Woodsfolk).  Potentially, you can get armies of groups together and have huge battles between characters and their minions.  This in the same system built and perfectly suited for single PC adventuring!

5) You decide your adventure’s goals and methods

Magic Realm’s victory goals are decided by the player at the beginning of the game.  There is no universal win condition.  Depending on your character choice and your goals your adventure is totally different.  Use the Swordsman (fast thief player), set your goals to win gold and find yourself running away from most powerful enemies, trying to sneak into treasure hordes and sell your ill gotten gains to various NPCs.  Use the Berserker and set your goal to fame and notoriety and walk around the realm trying to slaughter all comers.  As the Wizard try to find and decipher runes to gain as many usable spells as possible.

6) The game is lethal and subtle

You will die.  A lot.  Until you get your shit together and really get the rules down, when you will realize what monsters are deadly for you and the ways to try to avoid them, you're going to die.  On top of this, since characters are so varied, different characters have to worry about different threats and monsters.  The difference between two characters may be a single asterisk on a chit, but that asterisk can make all the difference between how you play those two characters.  Games like this would simply never be released today, for better or worse.  Do not expect a reprint not only because Hamblen is apparently a recluse now but because this game would not be acceptable for modern audiences because of its subtlety and especially because it requires many, many plays to survive consistently.  Once you get there, however, the game is almost incalculably rewarding with its variety of strategies and outcomes.  Sure, maybe Z-man would like to reprint this, but he’d have to completely overhaul the game to make it easier and to make it more obvious to play for new players.

Anyway, for what it’s worth my next game buying/project is to make the PnP version of Magic Realm.  I need to have a physical copy.

Steve is a member of Fortress: Ameritrash.