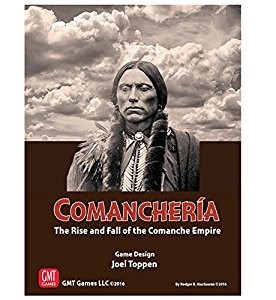 Game Name
Comanchería: The Rise and Fall of the Comanche Empire
Publisher
GMT Games
Designer
Joel Toppen
There Will Be Games

Ages ago I had a article series where I took games in my collection and thought about them via the one mechanic I think defines them.  Today I’m going back to that with Comanchería from GMT Games.

The mechanic that defines Comanchería is its conflict resolution system of chit pulls.   The mechanic lets the player control game tempo through the resolution of conflict.  It is a custom mechanism that reflects the underlying theme incredibly effectively.

Comanchería is a Joel Toppen designed solitaire game that came out last year, following in the footsteps of the solid Navajo Wars.  In it, you control the Comanche First Nation struggling against the various colonizers and other Nations competing with you for control of the US great plains.

What separates Navajo Wars and Comanchería, however, is a subtle but important rules twist to the way that enemy AI actions are handled.  AI powers (e.g. Spain) in both games have action points allocated to them to fulfill a menu of activities.  The change in Comanchería, though, is that the player is largely given control of enemy action points through the conflict resolution system.  In essence, whenever players undertake an intentional conflictual activity (raiding, warfare), they do a chit pull to find out how successful it is.  While chit pull is a common wargame resolution mechanism, Comanchería separates itself by including enemy action point chits instead of generic “failure” chits.  When players draw a “fail” for conflictual activities, they are not simply losing the opportunity to capture something from an AI power, they are giving that AI power the action points they will subsequently use to conduct their various activities.  While the enemy will conduct activities at a very slow pace if your pieces lay low, it is safe to say that most enemy activity will occur as a byproduct of player attempts to directly challenge the AI.  Game tempo is, therefore, placed in the player’s hands. Specifically, the mechanic contrasts with the more common solo game tempo of drawing a card (e.g. Eldritch and Arkham Horror).

Beyond its mechanical subtlety, tying Comanche conflictual activity level to enemy activity intensity makes almost perfect thematic sense.  If your Comanche sit still, hunting Bison, trading, and tending to internal matters, your enemy will not take much notice of you.  Colonial powers will still work to tighten the noose, but slowly: they might build a settlement or two or start to clear the plains of bison and other Nations, but it is unlikely you will provoke a major war or a series of 3-4 nasty AI actions in a row.  Conduct a series of raids that hurt the colonial power, on the other hand, and you are likely to find yourself squarely in the sights of your solo opponent.

Gary Sax replied the topic: #251020 08 Jul 2017 13:09
I've played this one a few more times since I submitted this review. One thing to highlight to anyone who plays it is that it's pretty contingent on your start since you only have a single Comancheria and there are random events. So if you're going to lose early, it'll probably be in the first era. Once you get off the ground a bit and have 2-3 comancherias, even weak ones, you're much more likely to play through almost the entire first couple eras, though you may not win.

Makes me think that it would have helped to have a more advanced start scenario.
Read More...