Chaos in the Old World - Review 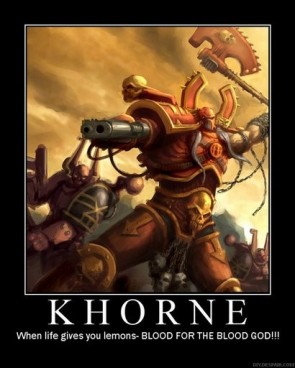 "From the fires of Betrayal unto the blood of revenge we bringthe name of Lorgar, the Bearer of the Word, the favored Son of Chaos,all praise be given to him. From those that would not heed we offerpraise to those who do, that they might turn their gaze our way andgift us with the Boon of Pain, to turn the Galaxy red with the blood,and feed the hunger of the Gods."

-Excerpt From the 341st Book of Epistles of Lorgar

In the Chaos in the Old Worldboard game, each player takes the role of one of the malevolent Lords of Chaos.Each god’s distinctive powers and legion of followers give the controllingplayer unique strengths and heretical abilities with which to corrupt andenslave the Old World. Yet, as the powers ofChaos seek domination by corruption and conquest, they must vie not onlyagainst each other, but also against the desperate denizens of the Old World who fight to banish the gods back to the maelstrom of the Realm of Chaos. -From the Fantasy Flight Games site

And so it was long before knowing much of anything about the actual game and it's mechanics, that I was totally stoked on Chaos in the Old World already. For those not in the know, the game is set in the Warhammer universe. It's a fairly generic fantasy setting with some notable exceptions. One of my favorite factions (especially in 40k, the far future version) is Chaos. See, there are four diabolical gods of evil that battle not just the other factions of the world, but also constantly try and screw each other over in their quest for supremacy. Once in a while they might kinda sorta work together, but in Chaos in the Old World it's a god on god orgy of hate. The game really plays this thematic darkness up; you mostly succeed through corruption of regions, you play cards like "Rain of Pus" or "The Skull Throne" and there is definitely no one fighting for the good of the people.

Each god has their own unique flavor and in-game powers that play into it, mostly through their unique action card and upgrade decks but also through the way they advance their threat dials (more on those later). For example, Khorneis the god most into brutal bloody violence and so his powers, and thus play style, focus on direct confrontation and combat with the other gods. Additionally, there are two ways to trigger a win and each god tends to favor adifferent path to victory. I love this kind of thing and the game does it beautifully. The powers are balanced with each other both thematically and mechanically. They each have really strong individual feelings yet it’s not so oppressivein that they make you feel forced to play a certain way, but rather they just give you the vibe that you are playing a specific sect with its own philosophical approach to the destruction of non-believers. Plus the asymmetry leads to great friction between the different player's goals and adds a lot of replayability.

Speaking of the non-believers, while they don't play a major role, the regular citizens of the titular Old World are a constant pain in the ass. They mostly serve to randomly mix up the board conditions and make certain areas more, or less, appealing for corruption. If you know you're going to have to suffer casualties from some stupid good guys trying to stop your pillaging party, you might rethink your plan of attack. The game also has a pile of event/world condition type cards that serve to further a varied game environment throughout. The cards also do a great job of serving as a timer to keep game length in check (when the randomly drawn pile is done, so is the game) and encouraging aggressive play. 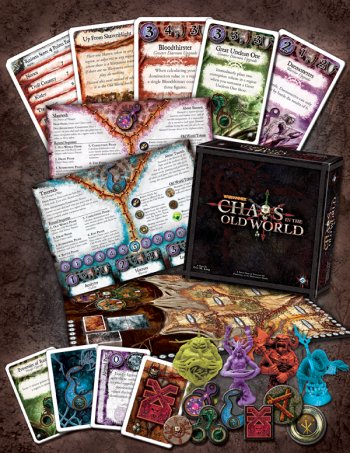 There are two ways to win, advance your threat dial to theend or have the most VP after someone crosses the 50 point threshold. Everyone earns VP in much the same way, but advancing one’s dial is triggered by goals unique to each god, so you have a good mix of people all trying to do the same thing (earn VP) but with different styles and focuses to keep their dial moving up. Even if you are planning to go all out on VP, you still want to pay attention to the dial as it’s also how you earn upgrades and some bonus VP. Two different win conditions is almost always a good thing, but unlike some fluffy other games, if a player hasn't won by the end you don't just add up VP and declare a winner, oh no that is for the faithless, for the Chaos gods are all or nothing; EVERYONE CAN LOSE! That's right, if the game ends through card draws and no one has met either of the win conditions, you’re all heading back to the warp in shame.

The basic play mechanics involved aren't doing anything totally ground breaking which is good and bad. It's bad in that I always love to see designers trying some new things and pushing the envelope even when it doesn't always work out perfect (see Android). But the upside to this more conservative approach is strong. First, it means that the game is very easy to pick up and learn, thereare a couple tricky situations here and there, but anyone who's played even Risk should be able to get it down cold after a turn or two. The second is that the blending and refinement of established mechanics in the game is at a top notch level. Eric Lang has a number of quality designs under his belt already and it shows. (It's also getting me even more excited for his upcoming A Song of Ice and Fire Adventure Game). Chaos in the Old World is really at the forefront of multiplayer conflict "dudes on a map"gaming design now. A lot of people have been pointing out a Euro influence and it's undeniable that some of the ideas came from the classic German pantheon but to me the game is unequivocally Ameritrash in overall execution and feeling. No one is impressing a baron by building the best gingerbread house, you're murdering his wife and eating the babies while you slug it out against your fellow depraved abominations over who can defile the populace first.

Also, just a quick note about the production (as if there was any real question); it's aces almost all the way. Quality sculpts, amazing art direction and graphic theming, solid components and all the attention to presentation detail that you can expect from Fantasy Flight Games. However, as of now there are a couple of known typos (which sadly one can also expect from Fantasy Flight Games) so just make sure you get the errata/FAQ. And there are a few bits of form vs function that they may have gone the wrong way on; the cultist staves look cool in theory but most of them are bent and kinda dumpy looking in reality, and the regions can get a little cluttered and make it hard to see some important info under there too.

Awesome theme, lots of conflict, variable player powers and end game conditions, allin a high quality production. Right now I'm pretty confidant in saying that this is one of the best releases of the year. It's unfortunate timing that itwas released around the same time as Space Hulk 3rd Ed. and seems to have gotten less attention that it deserves. But I think that slowly but surely the momentum will build as people notice just how great this design is and it will go down as yet another Ameritrash classic that stands the test of time. And if you don’t like it, well, BLOOD FOR THE BLOOD GOD!