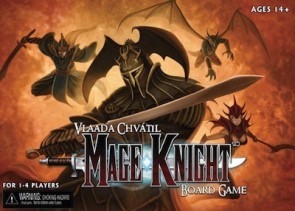 At some point in the last 50 years, "fantasy" came to denote a certain image: elves, dwarves, and wizards who embark on a quest and have lots of big adventures. There's a certain epic sweep to fantasy, but at its core it tends to be pulpy. That basic silliness must be overcome or cast aside for a fantasy novel to really shine. The exception to goofy nature is what most people would consider the first true modern fantasy novel, The Lord of the Rings. Tolkien's classic may have many similar trappings, but its attitude is entirely different. Instead of action there are journeys. The tone is lyrical and elegiac, rather than fast-paced. As such, some modern readers find The Lord of the Rings to be curiously slow. It's not a book that is meant to be burned through. It demands something from the reader.

Many gamers will feel that way about Mage Knight, the new game based on the miniatures game from several years ago. Modern fantasy games tend to be filled with random events, fast-paced gameplay, and flavor text. That isn’t necessarily bad, but Mage Knight pushes fantasy games forward from what they have been, and towards what they could be. In place of the unexpected, Mage Knight exists in the realm of the challenge. There aren't surprises so much as there are insurmountable obstacles. It's up to you to decide how you overcome them.

Even as I write those words, I see that I don't really do the game justice. Indeed, Mage Knight is a difficult game to grasp on several levels. First of all, its sheer complexity is overwhelming. Upon opening the box, the player is greeted with not one, but two rulebooks, both formatted with a tiny font in three columns. There are piles of tokens and cards that need to be sorted and figured out before you get started. Then after you've dug into the game it begins to reveal new aspects that you never even thought about. After 7-8 games, I am just now beginning to see that I am a mere apprentice to what Mage Knight has to offer. And rather than discouraging me from learning it, the game keeps giving me just enough to keep me coming back. It has dug its talons into my brain, and I love it.

Each player takes the role of a Mage Knight who travels through the countryside, conquering strongholds, defeating monsters, and recruiting an army of followers to accomplish these goals. It's a bit like what most people would call an "adventure game," but there are some key differences. The biggest one is that very little of the game comes down to a random resolution. When you lay out new terrain, you see everything that is out there. The exact nature of what you will have to conquer may be unknown, but with a little experience you can gauge what kind of fight you will be in for. Everything the player does is through a deck of cards. These cards allow you to move, attack, block damage, or influence NPCs. Each card also has a second effect that can be utilized if you spend some mana of the appropriate color. So the bulk of the game is figuring out how best to play your cards to take maximum advantage of the different abilities on your cards. If you spend this card one way, then spend the other cards a certain way, you might be able to forge forward and defeat some orcs. But if you rearrange the order in which you play, you might be able to do something more worthwhile with your hand. New skills and spells can be added to your deck, in a rather ingenious usage of deck-building to level up your character. Behind all of this is a day/night cycle, which changes some details of the game and how your cards work depending on what time of the day it is. Most scenarios are over after a certain number of cycles, usually two or three.

The turn-by-turn challenge of how to utilize your hand is where most of the meat is, and there's a lot of it. It's a rather large task to figure out how to budget your mana and cards, and I suspect that many people who normally love fantasy adventure games won't enjoy this part. It requires some mental gymnastics that I'm still not always up to, and even then some people just won’t enjoy it. The ordeal gets tougher when combat comes into play, because then you need to take yourself through the four-step combat process, all while keeping track of what your cards are doing. Note that the actual process of keeping this straight is actually pretty simple. The difficulty comes from figuring out how to do it most effectively. It's been called "puzzle-like" and that’s no lie.

That tendency might ruin a lesser game, but Mage Knight overcomes it admirably. That's because it gives the players an extraordinary range of actions to perform, and it's wide-open as to what actions you take at any given time. Right out of the gate, a player could choose to attack some orcs, recruit in the local village, conquer a mage tower or a keep, or visit the local monastery. And when you visit the monastery, you have the option to burn it down to get a valuable item. And that doesn't even touch on the monster pits, ruins, and dungeons where you can get other good stuff. Not everything will be possible every turn, but you are largely left to your own devices as to how you want to accomplish something. This has the side-effect of bolstering the narrative of the game. Events in the story happen because you chose to do them, not because a card told you to go there and do something. The result is a surprisingly engaging game, one that not only gives you a strong dose of setting and story, but that also gives you a constant challenge as to how you want to accomplish those things.

If you can't tell by now, Mage Knight is not a simple game. Remember those two rulebooks? You'll want to read them both. Fortunately, the first is a introductory walkthrough. I'm not normally one to advocate a learning game, but in this case I’ll make an exception. This learning rulebook is very effective. It's designed as something that you can crack open with some friends and power through before any of you have played. And that would take a while, but it actually works. The other rule-book is the full version of the rules, filling in the little details that you learned in that first scenario. Perhaps the biggest miracle of Mage Knight is that its complexity doesn't feel forced. The basic structure is surprisingly straightforward, and the vast ruleset is very well-integrated with the rest of the experience. Nothing sticks out or feels out of place.

The downside is that the game can feel a lot longer than it actually is, especially if your group has a tendency to take turns slowly. Every round has the potential to take a while, since every move invites analysis. This will be a deal-breaker for some. But Mage Knight has a terrific solution for those of you with slow opponents: a solo version. The solitaire game has all of the crunchy parts without a lot of the downtime, and it's very satisfying. And if you do have other players you can probably find a way to play that will fit you perfectly. The scenarios range from the cutthroat to the cooperative, from the multi-player to the solitaire versions.

Mage Knight was designed by Vlaada Chvatil, the designer of Galaxy Trucker and Space Alert. For the third time, Chvatil has made a game that is a true original. It’s a brutal system that keeps pushing you to improve the way you play, and like Tolkien, it demands a certain level of commitment. But the payoff is a wonderfully rich experience that keeps displaying new facets. My first game was one of discovery. My second game was one where the experience threatened to overwhelm me. Every game since then has been a new lesson in how little I know, and how much I want to learn.