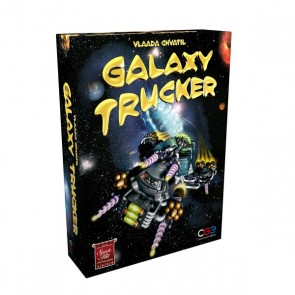 I like to go back and look at games that have been out for a while. I’ve already done it with a couple of my favorite games, and I think it’s a great way to reaffirm and reevaluate my opinions. Games don’t change but we certainly do, and my five years in the hobby have seen my attitudes towards board gaming shift dramatically. I’ve grown more accustomed to different genres, and I’ve become more experienced in writing about a variety of topics. But in all of those five years, I’ve never really written about something like Galaxy Trucker, which is probably why I’m currently typing this up.

It’s only recently that I’ve figured out how I really feel about Galaxy Trucker. When the game was released in English in 2008, I ignored it in favor of the more-popular Agricola, which came out around the same time. One can only buy so many $70 board games, and Galaxy Trucker was what could only be called a wild card. So I waited to try it out for a few months. When a friend finally introduced me to it, I wasn’t completely sure how to feel. Itbroke a lot of rules I assumed were set in stone. A real-time building phase? A series of events where the player is given almost no control? Pervasive randomness? That’s what my head was telling me. My heart was telling me that I actually had a lot of fun. But for whatever reason, I largely passed by the game. Some further plays calcified my opinion: Galaxy Trucker was a fun game that someone else could own, but I didn’t need to get it for myself.

Except it stuck with me over the years. I’d play from time to time, and invariably I would have fun. It kept creeping into my consciousness, until I one day found a copy on the cheap and decided that I had flirted long enough. And here I am. It turns out that Galaxy Trucker has truly beguiled me, and it only took five years to figure it out.

Like I said, games don’t change but we do. I’ve grown much more accepting of goofiness in games, and Galaxy Trucker has a goofy streak a mile wide. The players each take the role of the titular occupation. The game is composed of three rounds, each split in two parts. The first part of a round consists of grabbing tiles to build your spaceship. This is done simultaneously with everyone else, so there’s a frantic rush to grab components before your opponents get what you need. It’s like Carcassonne, if everyone played at the same time and didn’t bother taking turns. This building phase is timed, so if you haven’t finished by the end of the allotted time you have to deal with what you have. The components come from a broad selection of common spaceship pieces, like shields, engines, blasters, and crew quarters. You’ll also want some cargo holds to take freight from point A to point B. After the building is completed, the players then race their ships through a punishing gauntlet of event cards. These might represent pirates, slavers, asteroid fields, or the delightful space plague. If you can get your ship to survive the run, you get a payout for finishing, and for the cargo you picked up. Do that three times, each time with a progressively bigger ship and a more difficult run.

Designer Vlaada Chvatil has used the “build and then destroy” structure a couple times since Galaxy Trucker, particularly in Space Alert and Dungeon Lords. Those are both fine games, but they are also a good deal more complex than Galaxy Trucker. The building phase is really the most difficult part here, and despite the different functions of the pieces it’s actually quite intuitive. Everyone knows how to just grab stuff. More than most complex games, Galaxy Trucker can be explained “as you go,” and that’s really the only way to tackle it. Later uses of this structure would add more and more analysis and rules-weight to the proceedings, and that always results in games that threaten to collapse under their own weight. Galaxy Trucker has no such problem. It uses complexity as a way to deepen the experience, not as a way to make the designer look smarter.

It’s a good thing too, because it allows for the game to emphasize it’s best asset: a fatalistic sense of humor. Too many games are period dramas, or fantasy epics, or sweeping war stories. Galaxy Trucker takes a page from the book of Dungeonquest, and embraces the board game as black comedy. This extends far beyond the amusing rules, which are fun to read but a little tough to follow in places. It even goes beyond the funny illustrations. The brilliance of Galaxy Trucker lies in the fact that it’s funny at it’s very core. The mechanics of the game feed into its sense of humor in a big way. The insanity of the building round would tear apart a lesser game, but here it just adds to the tone. And to me, the essence of comedy has always been the attempt to make sense of absurdity. Is there anything quite as absurd as the flip of a card to see who will lose half of their guys to space plague? This is one of the only games where a loss is just as enjoyable as a win, because there’s joy in watching your ship get blown apart and seeing your last crew member captured by traders. To respond with frustration is pointless. The only reasonable reaction is laughter.

And yet, it’s not just stupid. There’s a fair bit of skill to the game, and experienced players will beat new players almost 100% of the time. You eventually learn how to build more efficiently, how to prepare for certain kinds of events, and how to utilize the ability to peek at upcoming events. This is actually my one problem with the game, that a new player has very little chance of winning. There are a couple of solutions to handicap the game, however. Perhaps the experienced player could be given less time, or you could utilize from some elements from the appropriately-titled Big Expansion. That release toughens the game up considerably, and I definitely recommend it for future travelers. At the very least, it’ll make the game difficult and exciting again for old pros.

The most striking thing about Galaxy Trucker is that it has never been imitated. Oh, people have tried to nab the real-time element, or the funny rules, or even the flip-a-card gauntlet of challenges. But they miss the crucial attitude and abandon of the original. Five years on, and I’m still not sure we’re worthy of a game this funny and creative. It makes me question whether the game was actually designed. I have a hunch it was beamed in from another dimension.