Tag, You're on Fire - Wiz-War Re-review 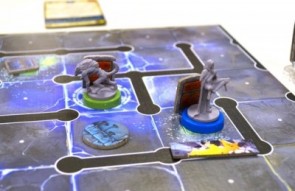 Sometimes reviewers have to write up what they know, and call it a day. There’s a kind of nebulous pressure to get a review out quickly, and usually that’s fine. If you play a game 3-4 times, you almost certainly know how you feel. There are times when it doesn’t even take that long. But now and then a game begins to grow legs after you pass judgement, and becomes this odd game that you gave an alright review to, but that you now love.

I reflect on this because I’ve been playing a lot of Wiz-War lately. I reviewed it last year, feeling mostly positive about it but also thinking it to be group-dependent and a little thin in terms of depth. But a funny thing happened: it kept getting played. If we had 3-4 of us before a game session, we got in the habit of playing it a couple times while we waited for people to show up. I recently invited a friend over to play Arkham Horror, but when that game went pear-shaped in 90 minutes, we closed out the night by just playing three games of Tom Jolly’s classic. I barely remember the opening ceremonies to the 2012 Olympics, because a friend and I played five times in the course of the program. It’s morphed into something of a staple.

I’m always interested when this happens, because it really speaks to one of the truths about games: they are living breathing experiences that evolve with us. Reviews have a finality that doesn’t reflect the protean nature of a game. This is especially true of a game like Wiz-War, which can take on a drastically different flavor depending on what cards get dealt and how people choose to play.

One big thing that changed was that I started to use a lot of what Fantasy Flight called the variant rules. In truth these are actually rules that have long been present in Wiz-War, but that FFG altered with their release. I didn’t try these until about 5-10 games into my Wiz-War experience, and it turns out they drastically improved it.  Suddenly the chaos increased, the stakes felt higher, and more drama was inserted into the game. It also feels just a little more natural to me to  leave all spells in play and to include player elimination. It’s more in keeping with the spirit of the game.

I don’t really have a problem with the rule changes that FFG made though. It really is a matter of preference, and I think that points to one of the best things about Wiz-War: it’s an incredibly flexible game. It’s light enough on rules that a few tweaks here or there won’t derail it. One thread on BGG talked about an old veteran of the game who enjoyed the FFG version far more by removing a lot of counter-spells from the deck. It adapts well to the needs of the group.

But the biggest reason that it’s stuck around is that it’s  just an easy game to internalize. The rules structure is so light that it doesn’t really need more 5-10 minutes of explanation. Something about it feels so elemental. If it hadn’t been designed we would feel its absence, I think. At the beginning I feared that it would be the sort of game that wouldn’t really jive with a lot of modern gamers, but it has proven to be far more successful with those who only have a passing knowledge of hobby games. It’s been an especially big hit with video gamers and with CCG fans. One friend of mine said it was essentially what a deathmatch-style, first-person-shooter board game should be, and I think that explains a lot of the appeal.

The biggest downside I’ve seen is that it’s just a game where you need to be comfortable with fuzzy card interactions. FFG has often had problems with stuff like this, and it’s more pronounced here because some of these issues are hard to predict. I gather there are some long-established rules conventions that have been bucked by FFG as well, though I wouldn’t really know what they are. The point is, it’s the sort of game where you’ll eventually have to just decide how you want to answer your own questions. I only mention this because I know it will frustrate some people. We haven’t yet seen a question that couldn’t just be answered by what sounds the most thematic. Still, never say never.

I’m really glad I stuck around with Wiz-War, because there was a stretch where I wasn’t sure I would. It’s proven to be far more durable and accessible than I thought it would be, and it’s made it’s way to do-not-trade status. I’m a little unclear as to how well the newest edition has done, but I don’t see many other people playing it besides me and my friends. I hope that it was at least successful enough to get an expansion. If it needs anything right now, it’s a fifth and sixth player. It would only add to the insanity and make the game that much easier to play. But even if it never happens, Wiz-War works well just by itself. It’s the sort of game where you play a round to open game night, and then end up playing three more times. We may treasure our copies of Dune and Twilight Imperium, but it’s stuff like Wiz-War that really is the workhorse of a game collection. Sometimes getting played is the biggest advantage a game can have.

Image from user Kilroy_locke on Boardgamegeek.com