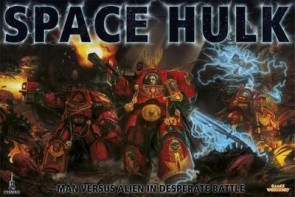 Since I’ve been in the hobby, I don’t think there’s been an event quite like the 2009 release of the 3rd edition of Space Hulk. There was a lot about it that we may never see again. It was before every classic from the 1980s was getting a major reprint, before Kickstarter created dozens of miniatures games that cost over $100. It was wholly unexpected and at that point arguably the biggest hobby board game release ever. And for the hobbyist sector, it had a bizarre and far-reaching response within the online community. A concerted effort by the game’s fans pushed the game into the BGG Top Ten, which evidently alerted Games Workshop to the presence of fan material on the website and resulted in a spate of C&D letters. Hundreds of users protested by adjusting their rating Space Hulk a “1,” which prompted a backlash-backlash of people who now rated the game a “10” on principle. It was staggering in its absurdity, and was exacerbated by the fact that Space Hulk vanished from store shelves in a matter of weeks, scooped up by scalpers and eager fans who hadn’t seen the game at retail in 15 years. It was assumed it would be years before another edition was produced, until just last week when Games Workshop announced an expanded version of the 3rd edition.

Most games would find it difficult to rise above that kind of three-ring circus, but Space Hulk is the sort of game that actually feels deserving of such passion. It’s a primal experience, a game that strikes on tropes that are familiar to everyone who has ever been into science fiction in any meaningful way. At twenty-five years old its effects are still being felt all over the industry, and not just from the 2009 reprint.

Space Hulk is set in GW’s Warhammer 40,000 universe, though it doesn’t have to be. One player commands a group of Space Marines who must accomplish a mission on board an enormous ship (the titular “space hulk”) while fending off attacks from the swarming Genestealers, played by the other player. Each unit gets a certain number of action points to spend, but the similarities between the two sides ends there. The Space Marines are slow moving and bulky, but they have the ability to take actions out of turn and are powerful at a distance. The Genestealers are far faster and have unlimited numbers, but they only have a melee attack. The two sides play very differently, but feel basically balanced with each other, the vagaries of scenario design notwithstanding.

There are two things that makes Space Hulk instantly appealing, the first being the themes and setting. The “marines versus swarm” story is a familiar one to anyone who has ever read Starship Troopers, played Starcraft, or watched Aliens. The mission book contains pages of backstory on the Warhammer 40K universe, but fascinating as it is it is ultimately unnecessary. That’s because it’s a setting that taps into themes that resonate with all of us. It’s a game about fearing the unknown, expressed in the “blips” that show the presence of Genestealers but don’t reveal their strength. It’s about imposing the order of might and organization against the overwhelming mass and writhing chaos of nature. And digging a little deeper into the backstory of the game, it’s about the desire for humanity to find redemption for itself from past failures, as the Space Marines are seeking to restore their honor after a disastrous defeat at another space hulk.

But all of those themes would be drowned out if the game weren’t designed so well. The structure of the game is simple and straightforward, with the details only really emerging when you get into individual scenarios and the use of specific weapons. It’s surprisingly quick, especially to those accustomed to longer ordeals like Descent. In my first game I was struck by how deadly it feels. One hit kills the unit, no matter who they are. This stood in contrast to every game I had ever played with hit points or tactical miniature gameplay. It’s refreshingly direct, and though the actual strategy has the potential to be somewhat thinky, the design works hard to keep everything immediate and forceful, forcing a time limit on the highly tactical Space Marines and giving the Genestealers fewer decision points to consider.

Of course, Games Workshop is first and foremost a miniatures company. This is reflected in all of the editions of Space Hulk, but 3rd Edition is the only one I’ve seen in person, and even after five years I find it breathtaking. The miniatures are insanely detailed, all with dynamic poses that reflect the roided out sensibilities of Warhammer 40K even while they strain against the boundaries of usability. The tiles are all from a heavy cardboard loaded with gruesome atmospheric details, and actually embossed to give the game even more texture. Of course the illustrations are all that excellent Games Workshop type, loaded with shadows and gunfights and skulls. It’s easy to pretend that gameplay exists apart from physical presentation, but Space Hulk’s third iteration shows just what a symbiotic relationship it can be. The game feeds off of its production in a way that cannot be underestimated.

This also has the side effect of making it a fun one to just look at. At the age of two, my eldest son was already fascinated by “Pace Hoke” and wanted to play with the pieces all the time. A couple years later it’s still one of his favorites. This weekend we busted it out and played a very simplified 15-minute version of it, and he’s already clambering to play again. It’s not just another board game to us. Its production, size, and visual appeal has all but guaranteed that it will be an heirloom.

Space Hulk is a trendsetting in more ways than one. Countless imitators have come along, games like Claustrophobia, Incursion, Descent, and Earth Reborn, all with Space Hulk DNA. Less positively, it was also responsible for breaking the $100 barrier on board game costs. Nowadays Kickstarter has made such prices commonplace, even while it allows smaller publishers to produce a similar physical product. The $125 expanded reprint of the 3rd edition now seems about par for the course for this kind of game. But even as its been expanded upon and imitated, I have yet to play anything that feels quite as intense and monumental as this one. Twenty-five years later, and there is still only one Space Hulk.