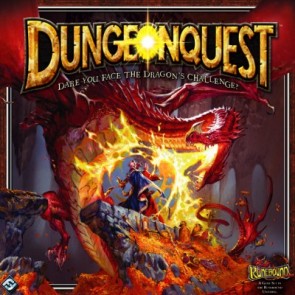 DungeonQuest is one of my all-time favourite titles. A fantasy adventure game in which your hero isn't heroic, but pathetically grateful to escape the nightmarish dungeon alive with a mere handful of gold coins. There's nothing else like it, and it's fast, funny and frantic for all that it lacks much in the way of strategy.

So I was thrilled when Fantasy Flight got the licence for a reprint, and sad when it looked like they'd botched it. The expansions to the original game were full of tiny niggles. Like new characters with mismatched power levels and a tedious catacomb under the main dungeon that was largely empty. They had the opportunity to create a definitive version of a classic, and in most respects, perhaps they did. It's just that no-one cared because they replaced the simple, speedy combat with a deeper but slower system that felt out of place in such a fast, chaotic game.

Now they're back again with this Revised Edition. The good news is that they learned from their mistakes. The combat system has reverted to type, and the rulebook slimmed down to just six pages, which is all the game needs. The better news is that in terms of all the other changes, they nailed it. This is the nearest thing to a definitive version of this classic.

There's almost nothing to DungeonQuest. Players create a dungeon as they play by drawing tiles, and then cards to see what's in the rooms they uncover. The variety is massive, so there's a thrilling sense of probing the unknown. What's revealed is almost always pain, death and destruction.

Some rooms can kill you if you fail an attribute test, just like that. Some potions are literally kill or cure depending on the result of a die roll. Some monsters are nigh-on impossible to defeat. All this can happen to you on the very first turn on the game. This isn't a game for anyone that wants meaningful decision making. It is a game for anyone that wants to be entertained with meaningless carnage.

It works because it's fast and simple, yet clothes the bare bones mechanics with as much narrative flesh as possible. Games last a maximum of an hour, and are often much shorter as hero after hero succumbs to the terrors of the dungeon. They can start again, if they dare. Or sit out the remainder as a spectator sport. Or perhaps take on the role of a monster using a neat variant from FFG's previous edition, not included here.

Anyone who makes it to the central dungeon chamber randomly draws cards again to see if they avoid waking the slumbering dragon. If they're not barbecued, there's another draw to see what treasure they find. In a great addition to the basic formula, the treasure deck now includes magic items alongside gold. So you can gain things like a magic carpet to fly over bottomless pits, or a quicksilver potion for bonus turns.

That's right. Even if you make it to the middle, you still have to make back to the entrance alive. Otherwise your haul doesn't count.

Almost everything else that FFG have done improves on the original Games Workshop edition. The cartoon art has been replaced with something darker and better quality. The annoying, un-shuffle-able geometric card decks are now a uniform rectangle. There are useful icons all over the place. The best dungeons tiles and cards from the old catacombs expansion have made it across. And the previously empty catacombs are now filled with thrilling encounters.

It's not all there, however. Veterans will miss the amusement value of amulets. These were potentially lethal magic items with secret trigger conditions that were held by the player adjacent to the finder. The snotlings have gone, as have the vampire and the giant spider. Small omissions: but in a game that relies so much on variety, their absence is still felt.

One thing that has seen substantial change is the character selection. Like everything else in the revised edition, they've been given a Terrinoth makeover. But the alterations are not just cosmetic. The original had bland knights and adventurers. Its "heroes" expansion was full of confusing and unbalanced additions. But these new characters all have special abilities that are fun to use.

There is one unfortunate outlier: Tatianna, who is so under-powered that you wonder if she was playtested at all. But that still leaves you enough characters for a full game complement.

At first glance the game looks a bit softer too. Attribute tests are now made on the graceful probability curve of two six sided dice instead of the blunt twelve-sider of the original. If you fail one, you get a determination token which you can spend for a bonus on the next. The game sometimes offers long-suffering heroes a bit of extra time with a randomly determined end turn. In practice it's just as brutal as ever it was. Two dice and the promise of a token won't help if you fail a bottomless pit test on the opening turn.

Fans of the original Games Workshop version won't find enough reasons here to upgrade. Indeed some seem to be vocal critical of the changes. I think that this Revised Edition is the best edition of this classic we've yet seen. And whatever your opinion is, you should be glad something so much fun is back in print, regardless of minor quibbles.

May 02, 2019
Rating
5.0
DungeonQuest
Great fun as a beer n' pretzels type game for fantasy lovers. Little thinking or strategy involved beyond a little risk-vs-payoff decision making but it plays fast, has tons of variety, heaps of tension and constructs an engaging narrative. The icing on the cake here is the astonishing carnage factor - it's quite common for all the players to meet various gruesome ends during the game, leaving no winner - which alone makes it worth playing.
MT
Matt Thrower #1 Reviewer 286 reviews

cdennett replied the topic: #197171 09 Feb 2015 04:16
But should I replace my original FFG version of the game with the Revised Edition? I keep eyeing it, but pass it over as my current game hasn't gotten to the table in over a year.

Legomancer replied the topic: #197178 09 Feb 2015 08:26
Once I replaced my FFG first edition with a combat die, I was happy. Does this edition change much other than the combat?

Matt Thrower replied the topic: #197187 09 Feb 2015 09:35
Unfortunately, I can't answer the most popular query on this (I was asked the same thing on twitter) - because I haven't played the previous FFG edition.

Egg Shen replied the topic: #197188 09 Feb 2015 09:37
I'm glad FFG realized that they messed up with their original reprint. This version seemed to go out of stock at most online retailers pretty quickly...so maybe that is an indication that it sold better that their 3rd Edition. When it comes back into stores I'll be sure to pick up a copy.

Columbob replied the topic: #197192 09 Feb 2015 10:29
Funny, we thought the under-powered character was the cultist, Brother Gherrin or whatever his name is.

cdennett wrote: But should I replace my original FFG version of the game with the Revised Edition? I keep eyeing it, but pass it over as my current game hasn't gotten to the table in over a year.

FFG has card updates you can download from their site to avoid buying the game again.

Gary Sax replied the topic: #197199 09 Feb 2015 11:43
I think they deserve some credit on this game. Yeah, I know they fucked up to start with, but they realized it and fixed it as soon as they could. Even trying to provide the revised material to original owners at the above links. I think that's pretty cool.

The card combat was as heavy as the rest of the game combined, but it was a good way to try to mix things up and get in the other guy's head.

We also always thought Brother Gherrin sucked. I'm not sure how the trollslayer dude is going to do without his deck of combat cards, he was always trap-meat.

That was sort of the problem, every character sucks against something out there, and it's a crapshoot whether you run into it and it end your game or not.

SuperflyPete replied the topic: #197262 10 Feb 2015 09:34
It took me a second to realize that this wasn't about the FFG reprint, but a second FFG reprint where they started listening to the customer base.

I really need to get this.

Gary Sax wrote: I think they deserve some credit on this game. Yeah, I know they fucked up to start with, but they realized it and fixed it as soon as they could. Even trying to provide the revised material to original owners at the above links. I think that's pretty cool.

Agreed. I am.quick to criticize FFG on needless screwups.
But you have to be just as quick when they fix that screw up to laude them as well.
Credit where it is due.

[Edit]
Also, thanks for the review, Matt. I'm definitely reconsidering bothering to get this now. I really wanted to like the first time ffg printed this. I just couldn't be bothered to learn a comparitively complicated combat system for such a simple game. It sucked the fun out of what should have been a much quicker game.
Read More...