Theseus and the Art of Negative Choices 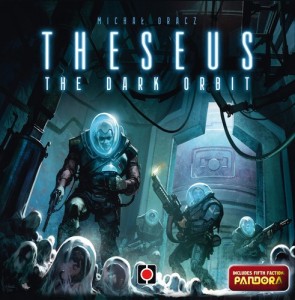 Theseus: The Dark Orbit makes being trapped and making horrible choices a blast.

Reiner Knizia, in his recent interview with Michael Barnes and Steve Weeks, said that he seeks to make games that give you only positive choices. His games, he posited, featured only a number of options that you really want to do. He contrasted that with games where you have to choose between bad options, suggesting that they aren't much fun.

Well, Theseus: The Dark Orbit is that type of negative choice game. I think it's a great counterpoint to that interview: Dr. Knizia's statement is about his preference in game design, not a universal rule that positive choice games are always better or more fun. The Theseus engine revolves around a simple Mancala movement system along with card effects that escalate how dangerous individual rooms or pawns are. But the entire game is predicated around locking your opponent down, forcing her into bad choices. Go into this room and get torched by an ambush from a prepared position. Move that pawn and you'll end up in a room with two land mines. Move that third pawn and end up in a space where it can be shot at the next turn by a bunch of aliens who fill up the room. Or, if you're skillful, wriggle out by setting up a situation where your pawns can move to a safe zone and breath a huge sigh of relief.

Theseus makes your own movement the most powerless, stressful part of the game, which is a bold choice. Most games make the player's pawns their avatar, or at least the proactive stage of the player's plan. Instead, the empowerment in the game revolves around your card play taken at the end of the turn. Those cards alter rooms and, ideally, force your opponent's moves into a few dangerous deterministic channels. Your own units don't really get more powerful, beyond a single upgrade. The offensive part of the game is all about setting the perfect trap and giving your opponent only terrible choices. And it is glorious fun.

hotseatgames replied the topic: #205576 07 Jul 2015 14:40
Last Sunday I played against my friend. I was the scientists, he was the grays. At one point he had two movement choices: walk into my upgraded camcorders so I can get 3 data points, or march into my upgraded defense system and take 4 damage.

And I just smiled.

Sagrilarus replied the topic: #205780 08 Jul 2015 23:08
Am I the only one whose thoughts turned to Monopoly reading this? It's likely the first game where you look forward to other players' turns more than your own.

Gary Sax replied the topic: #205786 08 Jul 2015 23:58
Definitely, spot on Sag. Theseus is a version of that moment where you have hotels on spaces 4, 6 and 7 spaces from the opponent's pawn and he's shaking the dice. The difference is that a) you elaborately constructed the equivalent of the hotels with a number of card powers and b) there's no dice roll so you can literally force the opponent to land on your hotels if you play it right.

Egg Shen wrote: It's a fucking shame that it doesn't seem to get much love (outside the walls of the Fort anyways).

Well, you know, Survivor is still on the air, so what's that tell you about people?

Josh Look wrote:
Well, you know, Survivor is still on the air, so what's that tell you about people?

That we're hopefully like 15 years or so away from The Running Man becoming an actual show???

It will only be like 7 years before this show exists:

This is probably the fifth time in history that a review alone, sight unseen, compelled me to do so.

SuperflyTNT wrote: I just bought this because of the review.

This is probably the fifth time in history that a review alone, sight unseen, compelled me to do so.

I will take you to school.

SuperflyPete replied the topic: #206246 14 Jul 2015 14:29
Played this and Suburbia last night. Played Theseus first. Turned Suburbia into a game of fuckery...the way all games should be.

You were SO right, Gary.
Read More...