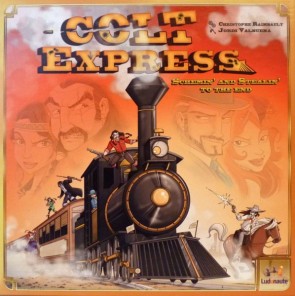 "Matt? It's Graham. I've got a house full of teenagers. Bring some multi-player games. And some more beer."

I'm in a rush, so I grab the first thing in front of me. It's Colt Express. I got it on a whim to play with my daughter.  I mean: it's cheap, it's got a cool 3d train and it won the Spiel des Jahres. What could go wrong? Well, as it turns out, what went wrong is that it's pretty poor with two. So it seems a good excuse to run the locomotive out again.

At Graham's house, you can practically smell the hormones. Everyone's getting ready for a fancy dress party. There are bits of costume everywhere. As fast as he tries to clear a space on the table, it gets filled again. After much effort, we set up the game.

No-one seems much interested until the train comes out. There are "oohs" and "aahs" of appreciation over the detailed cardboard carriages.

"What's this?" asks one young lady, Zoe, pulling unpunched sprues out of the box. "Can I make it up?"

It's scenery. Little cardboard cacti and rocks and distant mountains. I hadn't bothered with it because it's not necessary to play. But the idea that a game comes with purely decorative pieces is amazing news to Zoe. She's delighted and sets about building the bits with vigour.

I have to admit, they do look pretty neat beside the train. Games aren't always all about what's in the rules.

Rules are kind of important though, so now we've got everyone's attention, I explain how the basic version of the game works. Everyone gets a hand of action cards which they play, one at a time, as pre-planned actions. Then, once everyone has had the same number of plays, the cards get resolved one at a time, as players compete to loot the train and one another.

All you have to do to win, then, is remember what cards went down in what order. Easy, right?

At first, it is. On the first turn, everyone grabs some cash or gems from the carriages, if they've got the appropriate cards. Otherwise, it's punching and shooting your fellow bandits to get an edge. I've got a shot and pick Graham as a target. On his turn to shoot, he picks me.

This is an old dance. A good dance. We know the steps well.

Sometimes the cards go face-down, sometimes a player skips an action to get more cards. Sometimes you've had one can of scrumpy cider too many and you stop paying attention. Sometimes, you're going to a fancy dress party as Maui and your girlfriend is painting henna tattoos on your back while you play. Sometimes, you're a teenager and the 43-year old games writer on your left keeps threatening to jab you in the ribs with the poker as a distraction. After the first turn, things don't seem so easy.

Chaos ensues. Bandits are swarming over the train like flies, climbing on the roof, fist-fighting, brawling for loot. What everyone really wants is the thousand-dollar strongbox in the locomotive. But the Marshal is in there. You can't go in the same car as the Marshal. He's one tough hombre. There's a card to move him, and anyone in the same carriage takes a bullet and ends up on the roof.

Graham and I give up on the strongbox. Trying to plan to shoot each other through the haze of beer and brawling bandits is much more fun. The bullets fly. Let the young folk do what they do. We know what matters when it comes to games.

One young lad isn't doing too well. He's had loot, dropped it, had it stolen. But he's got a plan. He's going for that strongbox. I don't know if anyone else has noticed, but I track him moving the marshal, moving his piece. I can see it coming. To add to the confusion, I wave the poker around some more, while playing my own move the Marshal card.

Did he see it? Next card is face down. I have no idea what's going on. The waiting is wonderful.

We count out the cards one by one, action unfolding on the train like the frames on an old cowboy flick. Other players gather in the car where he's going to move the Marshal. Am I really the only one to notice? It's like having your own secret stash of sweets for a midnight snack.

I am the only one. Bam! The Marshal guns down a bunch of fleeing bandits. Bam! I move him back to protect the strongbox just as our young friend pounces. He's played the card, so he has to go down and get shot anyway. The sweets really are delicious.

At the end of the game, there's a thousand dollar bonus for the most bullets fired. After we've counted up our loot, we realise that bonus will decide the game. It does, in my favour. Spending the game shooting your best friend full of holes proves a surprisingly profitable venture, in terms of both money and fun.

An audience has gathered while we've been playing, drawn like trainspotters to a little cardboard steam engine. A large and hirsute young man and someone dressed as what appears to be Jack-in-the-green. There's room, so we all shift up. Zoe adds some more scenery.

This time we play the advanced rules, which are not remotely advanced. Each character has a special power: they don't seem balanced. Mine is to shoot through the train roof, while another player gets their first play face-down.

The added train effects are better. On the first turn the train brakes, throwing everyone on the roof one car forward. It's a tiny, inconsequential game effect, but it works, feels real, throws everyone into the game that little bit more. We begin the second turn with renewed excitement.

We're also playing a "strategy" variant, which isn't really. It only means you have to empty your deck before drawing over. It's a simple extra, but it's surprising how folk unused to hobby games can't get used to it. It's quite clear a couple of people are fudging cards. Damn kids. After a few beers, though, we don't care, we just want to keep the train moving.

Since the importance of the shooting bonus has become clear, the game has turned into a wild gunfight. Everyone's up on the roof, from where you get a clearer shot. This time I'm caught in a deathwish with Maui. "Who shall I fire at?" he asks in mock-wonderment, flipping a card over. "I know .... Matt!". On my turn, I just hand him my bullet card with a grin, deadweight to clog up his deck.

It's odd being stuck in a firefight with a Polynesian demigod.

The train and the bullets rumble on. We loot the passengers and the strongbox and each other. At one point a train card has the passengers shooting back. All pretence of planning is lost in the sheer, elemental joy of cordite and knuckledusters. When the dust settles, we're back in the same position of having the game decided by the bullet bonus.

To my intense annoyance, Maui wins. He flashes me a smirk and his girlfriend scolds him for moving while she's painting henna, so I smirk right back. If I'd have had one more bullet card on the last turn, or he one less, it'd have been the other way round. It's that sort of game. We kick this issue around in a desultory fashion before cracking open more beers and setting up again.

May 18, 2018 (Updated: May 29, 2018)
Rating
3.0
Colt Express
Critical Hits: Raucous fun with a real Wild West feel that stays engaging and unpredictable until the end. Fantastic components. Nice blend of chaos and pre-planned actions.

Erik Twice replied the topic: #267127 09 Apr 2018 10:06
I think this new direction you took is supergood for you Matt! I think it suits you a lot better and your articles have improved a lot.

Shellhead replied the topic: #267481 13 Apr 2018 11:30
I enjoyed reading this review more than most, because I really enjoy the simulated stories created by good games. I played a five-player game of Colt Express once, and it was a blast. The owner of the game had pimped it out with painted minis that he originally used in his Firefly rpg campaign.

Erik Twice wrote: I think this new direction you took is supergood for you Matt! I think it suits you a lot better and your articles have improved a lot.

Agreed. The last reviewer to really do this was the other Matt- Drake.* If people want clinical component descriptions and unboxings, they can go take their thumbs elsewhere.

*I miss that dude. I know he got burned out on board games and the surrounding culture, but I loved his writing.
Read More...