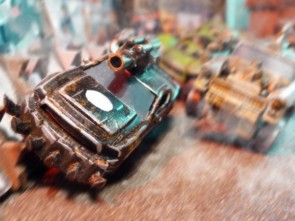 Not to put too fine a point on it, Mike Hutchinson's Gaslands is the best vehicle-based miniatures game that I have ever played - and yes, this does include Fantasy Flight's popular Star Wars designs, from which this game draws its template-based movement. It's a fast playing, action-packed rule set that benefits from leveraging familiar concepts and mechanics while offering a near-perfect mix of seat-of-your-pants tactical decision-making and wild push-your-luck unpredictability. And in case you haven't heard yet, all you need to play this game at the ground floor are a $12 book (or PDF), a couple of printouts, and a handful of $1 Hot Wheels.

Yes, that's right, this is "that Hot Wheels game" you might have seen at a game shop or in forums online. A big part of the appeal of this game, which is actually completely optional if you are dead set against painting and modeling and just want to play it, is modifying toy cars into salvaged death machines inspired by this game's muses. Namely, those key inspirations are pretty obviously Death Race 2000 and the Mad Max films. You can also trace this game's ancestry to Car Wars and the long-lost GW classic Dark Future. But make no mistake- this is a very modern, very progressive fun-first design. Everything from equipping your cars based on a "Cans"-based points system to simulating the effect of velocity on maneuverability to collision rules that actually aren't awful is handled with a light, intuitive touch that almost never finds the players rifling through or debating the rulebook. Accessibility is off the charts - this is a miniatures game anyone can enjoy without fussing around with keyword-covered upgrade cards or worrying about "optimal lists".

With a fictional premise straight out of a 1980s Cannon Films picture (televised automotive bloodsports on a post-apocalyptic earth with the winner getting a golden ticket to go live with the rich folks on Mars), Gaslands offers a couple of scenarios out of the book including a sort of default Death Race mode where players race through gates while trying to avoid crashing or being blown to bits by their opponents. There's a demolition derby type game that plops a few player-agnostic machine gun turrets into the field for extra mayhem. And there are also setups where players smash zombies for points or do battle with a monster truck. But the possibilities are unlimited - you could easily do an extended War Rig chase (a la Fury Road) or a more objective-based narrative design. Campaign or season play is also entirely doable. No matter how you choose to play, the core rules provide a rock-solid foundation.

Each vehicle, whether it's a car, buggy, pickup truck, bus, tank or whatever has just a couple of statistics based on its class. These determine its handling, available crew, hull points, maximum gear, and available build slots. You fill those build slots with weapons off a list which appears limiting at first, but it is important to understand that "counts as" rules here. So if you just have to build a Lamborghini Countach with twin laser guns on the front, you can do so - just count them as having the same stats as a machine gun. There are also advanced options available so that you can introduce special rules for accepting sponsorship and skill-based abilities.

Once you have your car or your team set up and have everything recorded (for this I recommend the original hobby gaming components, pencil and paper), it's off to the races. Each turn begins with a player in Pole Position, a first player designator that goes around the table after each round. A round is divided up into six Gears, so that cars travelling in higher gears get more activations. Old timers will recognize this as being basically the exact same concept as Impulses in Star Fleet Battles. So in Gear 1, everything moves. In Gear 2, only cars that have shifted up to gear 2 activate and on down the line. Gears also impact a number of elements where relative speed needs to be taken into consideration including collisions, evasion, and checking to see whether your stupid ass flips your car when you wipe out.

And of course, gear also affects the kinds of maneuvers you can pull off. All of these are represented by templates that you place at the front of your car, representing the path you will traverse during a movement. Travelling at lower speeds, you can do the hard or hairpin turns but you are restricted from trickier high-speed veers or swerves. If you are in fifth or sixth gear, you are greatly restricted in terms of changing your heading but you also have access to the long straight- perfect for a high-speed breakway provided you have the road to do it!

But Gaslands does this whole template movement thing one better. After you select your movement template for the activation (using, I would advise, the 'touch, use it' rule), you have the option of rolling a number of "skid dice" (either plain old D6s or custom dice) up to your car's handling rating. Shift results are the most desirable as they let you change gears up or down, remove Hazard from your car, or cancel unwanted die results. Hazard just puts exactly that on your car - if you accrue six of these, you wipe out and that causes you to possibly flip the car while busting you down to first gear, putting you out of the round. Spin gives you a hazard and you must rotate your car 90 degrees at the end of its template move- which is sometimes good, sometimes bad. Slide requires you to put a special template into a notch along your chosen movement template to represent turning too wide or losing control. It also adds a hazard, and can result in some hilarious consequences.

The Hazard management mechanic, along with the push-your-luck element that the skid dice represent, are what make this game special. It's genius design. You'll find yourself debating taking on a fifth hazard and then taking a chance on getting the sixth to make a risky move. Or you might consider taking a move that is "safe" for your speed, which gives you a free shift result based on the gear you are in. And at some speeds, certain templates give an automatic hazard so you have to weigh out the risk. And if you are riding around high on hazard, you've got to watch out for players with rockets - their Blast effect adds hazard when they hit you. Or, if someone smash attacks your car and puts two Hazard on it, you might find that 4 hazard wasn't as safe as you thought it was.

There is a slight learning curve as players get a handle on the movement templates, the importance of shifting down, and effective driving in general. But once it clicks and everyone understands that you can't blaze toward a wall in 5th gear and expect to do a 90 degree hard turn right in front of it, the game comes alive with challenge and competition. But control is never 100% certain, so there is always a flopped skid dice roll, a poorly chosen template, or a stupid risk that didn't pan out. There are also miracle drifts, cars coming in hot through the finish line literally on fire with one hull point left and five Hazard, and critical hit-laden attack rolls that wind up turning the tables dramatically.

If you've ever hoped that someone could make the "ultimate Mad Max game", Gaslands is it. Even the notion of salvaging Matchbox cars, random bits from other kits, and scrap materials like sprue clippings, toothpicks, and random pieces of whatever material works suits the setting. Beyond the endless possibilities of bespoke components it inspires, this game is an absolute masterpiece of tabletop design - narrative, compelling, and explosively fun to play.

For those people interested in Gaslands, the FB group is a great place to see the incredible work being done on vehicle mods.

the_jake_1973 wrote: I posted the review link to the Gaslands Facebook group I am a member of. I also sent a note along to Mike Hutchinson in case he was interested.

For those people interested in Gaslands, the FB group is a great place to see the incredible work being done on vehicle mods.

This one is very active:
www.facebook.com/groups/gaslands/

3'x4' I believe.
Da Bid is making a track so he will know better.

billyz wrote: Ummm...WHERE do I buy the book for this? I MUST have this....

You can buy the pdf from the Osprey publishing website.

billyz wrote: Ummm...WHERE do I buy the book for this? I MUST have this....

I bought a printed book off Amazon. $12.

ChristopherMD wrote: I bought a printed book off Amazon. $12.

Wish they sold a bundle of book, templates and dice. But can't find one anywhere.

Gaslands Store has links for various options but no one stop shop. I have played this and am looking to get set up myself.

3'x4' I believe.
Da Bid is making a track so he will know better.

stormseeker75 replied the topic: #276002 22 Jun 2018 08:10
Someone on BGG put together a really great teambuilder file. This thing is awesome. We could even share teams or post stuff to try out.